Translation for "cold" (I have a cold)

Which word would you recommend to translate "I have a cold"?

According to Duden, the standard written German translation of catch cold is sich erkälten. The corresponding noun is die Erkältung.

Regional expressions for sich erkälten are sich verkühlen and sich verkälten. A map of the distribution is shown in the Atlas zur deutschen Alltagssprache: 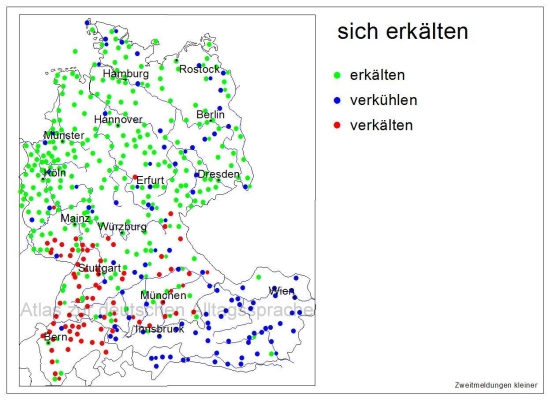 But you can also say:

The substantive Verkühlung is not a common expression (at least in my region).

could be only used in some countries. As a native German, I would say, that this is not correct (or at least not in South-Germany).

As hellcode recommended, you should say:

In Germany a Erkältung can refer to Schnupfen, which means you have to sneeze a lot and/or Husten, which is translated as cough.

Not the answer you're looking for? Browse other questions tagged word-usage word-choice or ask your own question.

5
When to use 'Ich bin', 'es geht mir', 'Ich habe' and 'mir ist'?
11
"Stock" or "Stockwerk" as translation of floor?
3
Translation for the word "spoiled": "verzogen"?
3
Wie sagt man "to recover from a sickness"?
6
“to render a template” in German
2
Why is “umwehten” used instead of “umwehte” in this Kafka text?
3
Translations of "child psychologist" into German (nouns with preceding multifunction adjectives)
7
Correct word for "unfathomable"?