I recently saw a monument with the following text:

The spelling of "Befreiung" piqued my interest. Has there been a spelling reform changing more the "ey"s to "ei"s? If so, when was it? Was Befreyung even pronounced like the modern Befreiung?

I believe the monument commemorates Ludwig I, who died 1868. 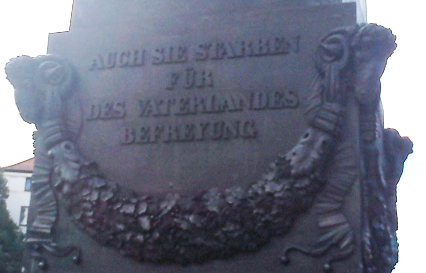 The German Wikipedia has a short article on the usage of "ey" instead of "ei".

What it says is that even until the early 19th century it was quite common to use "ey" or "eÿ" instead of "ei". This originated from the earlier spelling "eij". The "j" in "eij" was originally a different way of using "i", which could be used at the beginning or end of a word. I do not know if "ey" was pronounced differently than today's "ei", I can think of a way that it could have been but I am not sure at all.

Regarding spelling reforms, the same article references these as well. Pretty much what it came down to was that there was an "Orthographical Conference" in 1876, first rule books came out in 1879 and later, but they were not well accepted by the public and in general the rules were implemented quite differently in the different German states.

In 1901 the German written language got its first uniform rule set. The "Duden" became the official dictionary and in 1903 the new rules were officially used in administration and so forth.

I think the first "spelling reforms" were the first and second orthographical conferences (Erste und Zweite Orthographische Konferenz) from 1876 resp. 1906. Before that, there was no real common German, since there was no common Germany. The two conferences were to unify spelling in Germany for the first time. I didn't find a mention of "ey" being changed to "ei" in these reforms.

Befreyung may therefore be regional. If you read the Grimm, you'll encounter a lot of words written that way, even if they're written by the Grimms themselves (not just quotes). I think I rarely saw historical references written that way here in Northern Germany; since Ludwig was King of Bavaria, this might be a Bavarian spelling.

Not the answer you're looking for? Browse other questions tagged spelling history or ask your own question.

19
Is/Was there a Basic German?
7
'Dass' since the spelling reform
3
List of words affected by the 1901 spelling reform
1
Experimental German spelling of capitals?
14
Have spelling reformers ever proposed rewriting "-ti-" as "-zi-" when it is pronounced that way?
3
Why do some words that are not inflected have an umlaut?
10
Why was ⟨ß⟩ discontinued in Switzerland?
4
What spelling reform added "h" before sonorant (l, m, n, r)?
7
Authoritative source for apostrophe rule in adjectives from names (Gauß’sche, gaußsche, but not Gaußsche)?