How does “used” translate - “benutzt” or “benützt”?

Duden and other resources list both "benutzt", and "benützt" as valid but indicate that "benützt" is used regionally in Switzerland, Austria and southern Germany.

The "Atlas zur deutschen Alltagssprache" is both an awesome resource and dangerously fun to browse - I've wasted hours there.

They have the following distribution of the synonymous words "benützen" and "benutzen": 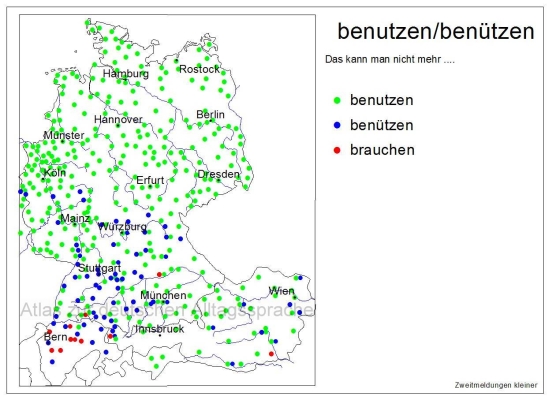 I think in southern Germany and Austria "benutzt" is as valid and common as benützt. I would rather use "benutzt" (or "gebraucht") than "benützt". I'm from South Tyrol which is near Austria and Switzerland.

I wasn't sure about Switzerland, so I googled "benutztes original" site:ch" just to see if there are any web pages containing a typical part of small ads. In fact, it seems to be common in Switzerland too.

For me (Viennese), I use both words and they have a slightly different flavour for me. "benutzt" has for me the flavour of using something up. A used hanky would be "benutzt" not "benützt".

On the other hand, "benützt" is more about ongoing use or right type of use as in "Please don't use my towel as doormat."

Therefore, the fact that Viennese people will tend to say "Das kann man nicht mehr benutzen." does not imply at all that "benützen" is not used frequently.

In swiss-german "brauchen" is normally used.

But if we're writing (or talking Standard-German for that matter) both are used. I think it depends a bit on the dialect the person speaks: for some "benutzen" will feel more natural for others its "benützen".

To answer your question, "benutzen" as well as "benützen" are understood and accepted in Switzerland.

Are translations for Germany different to those for Switzerland and Austria?

German is a pluricentric language, like English and many other languages, too. Think about a english-learner, who asks:

How does »Farbe« translate — »color« or »colour«?
All resources list both »color«, and »colour« as valid but indicate that »colour« is used regionally in United Kingdom.
Are translations for USA different to those for UK?

Is "benutzt" also accepted in Switzerland and Austria?

But I want to give a more canonical answer for all words that are not used in 100 % of the area where people speak German:

If you write a book and want to sell it, it is hard to sell it in Germany when it is written in Austrian or Swiss German. But Germany makes up 86 % of the whole German-speaking market. So what does every publishing house in all three countries do? They ask the author to translate it into German German, or they let the lectors do this job.

So every person who lives in Austria and ever read any book was reading texts in German German. But nobody in Germany has ever read a book written in Austrian German.

Whenever in Austria you watch an other TV station than ORF, you will hear German Standard German coming out of the speaker of your TV set.

But when you are in Germany, it is very unlikely that will find a TV station where people are talking in Austrian or Swiss German. And if you find them, you will not be interested in their program, because it deals with local Austrian or Swiss topics, or topics that you find in every other station too. (And they use this funny local kind of what they call German, that is hard to understand sometimes.)

The effect is that everybody in Austria and Switzerland will understand almost all terms that are specific for German Standard German. But most of them will use their own Austrian or Swiss term.

Particularly younger people living in Austria also actively use German Standard German, because they are used to it from TV and internet.

On the other hand: Almost nobody in Germany is able to understand specific Austrian or Swiss terms, because they never get in contact with them.

So to answer your Question:
»Benutzt« is understood in Switzerland and Austria because almost every word, that is part of German Standard German is understood there. If it is accepted depends on the age: Old people won't actively use it, but they still understand it. Young people also use it actively.

Are there any reasons for this difference?

But I guess, you want to know the reasons, so here they are:

German language never was ONE language. It was always a mixture of many different local dialects. At different times some people tried to generalize those dialects, and one of the most successful was Martin Luther when he translated the Bible into a language, that was nobody's native language. He translated it into a kind of German that was a mixture of many German dialects. Luther choose those words and terms, that were most common, and so he invented a new Language, that became a new standard. He not only had to find a standard for the vocabulary, but also for grammar, because grammar also differs between dialects.

People still kept speaking their local dialects, but over the centuries the influence of the language used in the Luther-Bible became stronger and stronger. Later some sovereigns and potentates also made efforts to create a more standardized German, but since Switzerland, Austria and Germany had different sovereigns, and because they had to standardize different sets of dialects, they came out with three different standards, which still exist and are used by the people.

Those three standards mostly have the same orthography, but they differ in vocabulary, grammar und usage of terms.

A tip for learners

But do not expect to understand everything that is spoken in Austria or Switzerland if you only learn German Standard German. But this is just the same problem that almost all Germans have when they come to Austria or Switzerland: After some weeks they get crazy here because they don't understand their new colleagues and neighbors. They thought that if they are German native speakers and go to a German speaking country, then they will have no problem with the language. But they are wrong.

Not the answer you're looking for? Browse other questions tagged translation etymology single-word-request austrian swiss-standard-german or ask your own question.

27
Why do we have two equally used terms for “toe”?
5
Why is “Zeile” but not “Zeiger” differently pronounced in the south?
9
Is there anything like a dime?
2
Project planning terminology
2
Southern Austrian Dialect word for “Patenonkel”
4
“Dachboden” or “Speicher” as “attic” in Austria?
6
Why »Rettungsarbeit« is used only in the plural form?
7
Adapt to Austrian grammar and spelling as Swiss expat
3
How to translate “Trinkets, odds and ends”
0
this, these, that, those, diese, das relationship