In translating some of the Middle High German of the Carmina Burana, my edition (piano/vocal edition of Orff's settings published by Schott, 1996) has the following verse:

I believe I read somewhere that this was a scribal abbreviation for "und/unde", but I can't remember where and can't find this information again. It would make sense, yielding:

Is this correct? I would also love any references (online or otherwise) confirming this if possible.

It would be nice to tell us your sources too.

Generally speaking I would agree. uñ is surely translated with und.

Yet after some googeling I found some other versions of your quote:

Yet they weren't using your variant so I had to search for the original which seems to be on Google Books (Bibliothek des Literarischen Vereins in Stuttgart, Literarischer Verein in Stuttgart., 1847): https://books.google.kg/books?id=e6osAQAAMAAJ&pg=PA209&dq=%22chum+un+mache+mich+gesunt%22&hl=de&sa=X&ei=R6RZVa2pGom8swGdyYDoCQ&ved=0CB0Q6AEwAA#v=onepage&q=%22chum%20un%20mache%20mich%20gesunt%22&f=false 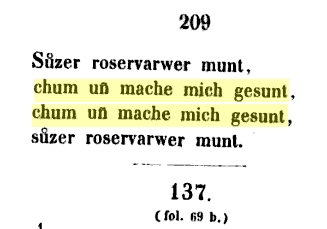 There seems to be a version by the German composer Carl Orff who translated un with und as well. Yet his writing it without the tilde. Probably only for reasons to write it less confusing.

https://www.atanet.org/publications/beacons_10_pages/page_68.pdf uses unde instead of vnde - which is only due to the Latin similarity of u and v. (Like the first version in this post)

It's difficult to say which which version is the "original" facsimile from the first text which appeared. I imagine it might be either vnde or un - just for practical uses.

Not the answer you're looking for? Browse other questions tagged abbreviations middle-high-german or ask your own question.

0
How would I translate cm (centimeter) into German?
17
“n/a” in German?
8
Meaning of the abbrevation “o.g.” and position in context?
11
What is the meaning of abbreviation »'n« and »'ne«?
8
Plural of English abbreviations in German?
4
“6 Dess” on older German postcards
3
What does the abbreviation »ankl« mean in German?