Does a "A free online Talking Dictionary of German Pronunciation" exist?

It helps me out a lot to hear how a word is pronounced in order to remember. I often use Duden, but sometimes it does not provide an audio recording of the word I´m looking for. Other dictionaries have often a fake voice or simply horrible recordings and for me it does not make sense to use them. Which online dictionary or tool do you usually use in order to hear how a word is pronounced?

In English I always use this one: Howjsay And it is really great! Do you have something like this also in German?

pronunciation resource
Share
Improve this question
edited May 21, 2015 at 9:18

A very good tool is provided by http://www.aussprache.at

In the Window "Suche" you can search for a word (example: search for »Chemie«). The findings are shown in the window above (for »Chemie« you find »Alchemie«, »Biochemie«, »Chemie« and »Chemielaborant«). Click on one of those findings.

And left of each written pronunciation you have two buttons to hear it. The red button is a female voice, the blue a male voice.

All six speakers are native speakers of their variation of German Language, and each speaker is a professional speaker. (I can only identify the Austrian voices, they are both speakers in Austrian Radio and Television.)

When you compare the pronunciations in different countries, you often will find that there are differences (like the pronunciation of »ch« in »Chemie«, the »ä« in »Käse« or the »s« in »Wiese«), but they are all correct and used in the respective country.

dict.cc provides the pronunciation. You just have to click the audio some users have uploaded. It's not always available, since it's sometimes the computer who speaks (but as I hear, that's the case in the dictionary you linked). 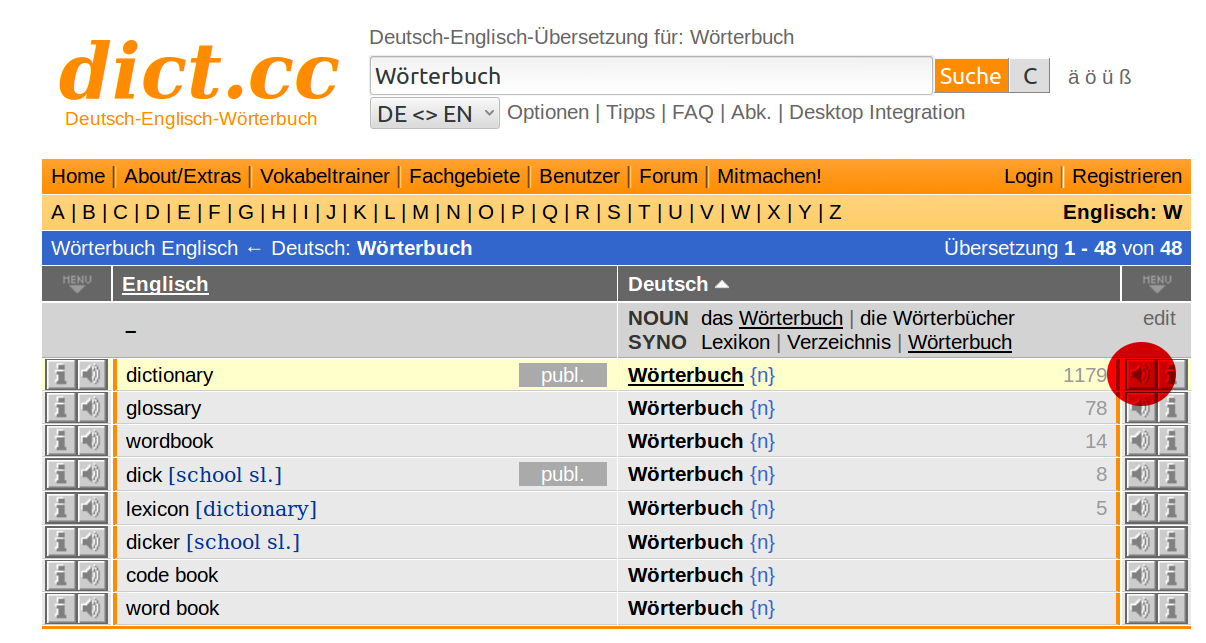 This one is good. Some words have several speakers with a map showing the region they are in. It even has Swiss German speakers and words for which few resources exist. This has helped me quite a bit since I live in Switzerland. Forvo

Not the answer you're looking for? Browse other questions tagged pronunciation resource or ask your own question.

1
Is there a German Dictionary with audio support?
31
Resources for learning German