In a recent discussion we talked about the phrase meines Wissens but I recalled a variant with a t: meinet Wissens. Is this a regionalism or what? If I google it the first dozen hits or so come up from Google Books, but here is an example from a discussion group forum:

Anyone care to comment on the use of this expression?

EDIT: Takkat has pointed out something one of his comments that must be so obvious to all Native German speakers that they simply took it for granted: that meinetwegen is a real word but meinetwisses isn’t. Could it be that the use of meinetwissens has nothing to do with the regions where wat/dat is spoken, and simply a case of people transferring over from the correct form (meinetwegen) to a similar-sounding one that is incorrect?

As @sollniss already mentioned, this is just a regional pronunciation of the word written literally. The tone of the text is rather informal and the author probably didn't worry too much about using standard spelling (you can tell just by looking at nem instead of einem).

However, this is not exclusive of Berlinerisch. This map shows other regions that feature the pronunciation (it is particularly popular in the so-called Ruhrgebiet): 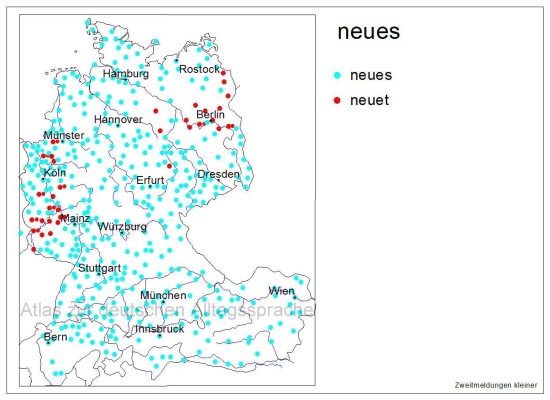 It's also worth noting that it is normally believed that the pronunciation with the /t/ is newer and came from the standard pronunciation, which is actually not true. It's completely the other way around. The /t/ sound shifted towards an /s/ sound.

The only widely accepted spelling is "meines Wissens"

It is as early as the 16th Century when the term "meines Wissens" was used in written German documents. The earliest Google reference dates back to 1539:

Another spelling was never used, at least not within the limits we can search by Google (search hits for "meinet wissens" were exclusively from scanning errors of small prints or Fraktur).

Misspellings are not rare

Still, results in all newer media including poorly reviewed journals, chats, blogs, or forums reveal that "meinet Wissens" is found surprisingly often with variants such as "meinet wissens" or very often "meinetwissens" (we event found entries for "meinentwissens").

It remains speculative as to why people use this spelling. One reason may be that it was influenced by regional dialects where "meines" is pronounced "meinet".

Another rather likely reason may be that people who are not sure about the correct spelling use similar words they know such as meinetwegen. This would also explain why the occurence as a composite (which it is not) outnumbers other variants.

Not the answer you're looking for? Browse other questions tagged dialect regional or ask your own question.

8
Best way of expressing "for all I know" in German