Just heard about the greeting Moin which is prevalent in Hamburg at least but seemingly not in other non-harbour like cities. I hear Morge quite a bit, and of course Guten Morgen, but just wondering what other ones you might hear?

In Austria you don't hear »Moin« (only immigrants and tourists from Germany might use it). »Moin« is one of those words of who most Austrian think that it sounds very ugly (not as ugly as »Quark«, but close to it). Sorry, German friends, we like you, but we would like you even more if you wouldn't say »Moin« when you visit Austria.

Most common in Austria is:

It sounds like »moañ« where »oa« is a diphthong (quickly slide from o to a) and ñ stands for the ng-sound at the end of »Gong«.

If you want to be funny (and annoying if you use it too often) you could also say:

It sounds like »morgän« (no diphthong) and the part »gähn« ist spoken like in »gähnen« (it means »give a yawn«), but with an extra long ä to make clear, that you don't want to say morgen (in english: morning).

The »official« greeting in the morning, of course is:

You can find more about how to greet in Austria here (in German): Polite alternatives to "Grüß Gott"?

(Sorry, I can't speak about regions in Germany, or Switzerland; only Austria)

As others have already said, the traditional Moin is not a morning greeting but is used in the North all around the day. Compare with this map from the Atlas der deutschen Alltagssprache showing what one would say when entering a shop in the afternoon: 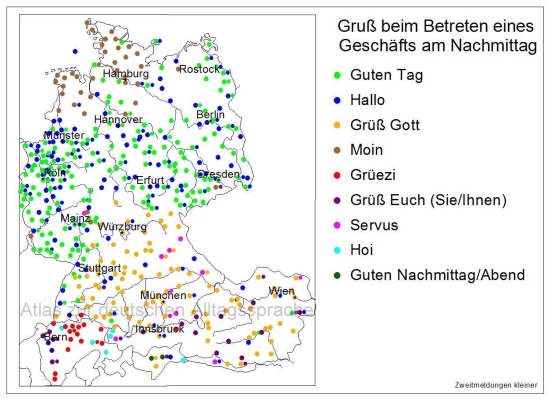 However, as often, the analysis is convoluted by the simple fact that Morgen, short for guten Morgen and definitely a morning greeting, is often shortened even further to things like Morng or Morjn (depending on region; the North-East would say Morjen anyway) from whence it is not a long way to make it sound like Moin. So there are definitely people out there that would use something that sounds like Moin in the sense of Morgen. When I from (Western) Bavaria (people definitely not suspicious of using Northern expressions) say Morgen — regardless of whether the morning or tomorrow is meant — it sounds approximately like Moing. (The vowel quality is still distinctly different from Northern Moin, but I can’t clearly put it in writing.)

Generally all possible ways that one can say, smile or grunt Morgen can be more or less accepted morning greetings.

Now this isn't going to be a complete answer. But as a native speaker I had long been of the understanding that Moin was related to Morgen, essentially a condensed form. Turns out it might not. It's debatable and likely one of those mysteries that won't be solved without a time machine.

This (partial) answer shall address the misunderstanding a little, but it's too long for a comment (marking it thus as CW).

Moin or Moin Moin is often uttered as a greeting - also all day long - by people hailing from the "Northern" parts of Germany. However, what encompasses "Northern" is open for debate. I guess for anyone South of Bavaria's Northern border, the rest is "Northern" ;)

A better term would be Low German parts referring to the lack of bigger mountains, not some other quality of the language!

The now official version of the word's heritage is that it doesn't stem from a shortened Morgen (morning) but rather from Middle Low German mōi / mooi (for: good, pretty). But its origin is actually still debated.

The fact that the use can be proved for 1828 in Berlin and that it was described as a morning greeting suggests that the Middle Low German hypothesis is only part of the truth.

Curiously Moin is also in use in Switzerland, which makes the Low German hypothesis less credible - if only for that regional use of the word.

My take on the matter is that the word while pronounced and spelled the same these days, likely originated from different words in different regions (and perhaps at different times). I can fully subscribe to the Middle Low German hypothesis and still maintain that perhaps Moin also originated in Berlin from Morgen.

Not sure why some linguists insist on a single source hypothesis.

Not the answer you're looking for? Browse other questions tagged colloquial salutation or ask your own question.

5
'Blau machen' and other phrases for absenteeism
2
Friendly Greetings
13
Dialect of a story from the “Koch-Buch für die Deutschen in Amerika” (1897)
13
What greetings were common before “grüß Gott” became universal?