Recording numbers in the German language

The rules for recording large numbers are not much different from English. The main difference to English is that in German, , and . are swapped. The comma is used as a decimal point, and the dot is used for grouping thousands (optionally, can be the empty string or a blank as well).

Like Stephi said in a comment, the "569,0" could be an implicit abbreviation where a bank person is talking about Thousands or Millions of currency and just drops the tiresome zeros. I'd expect a small annotation somewhere which explains the abbreviation "scale", like "569,01 ... (footnote: 1: in Tausend Euro)".

The 34,8000 only makes sense in a context where a minimum decimal precision is mandatory. But I've never encountered that in hand-writing. This is something usually done in Excel sheets only.

So in summary, the numbers in your document either conform to some house rules (ie. a common notation used by the relevant industry), or they just lack some context, like the footnotes I mentioned, but they are not something I'd consider standard notation. 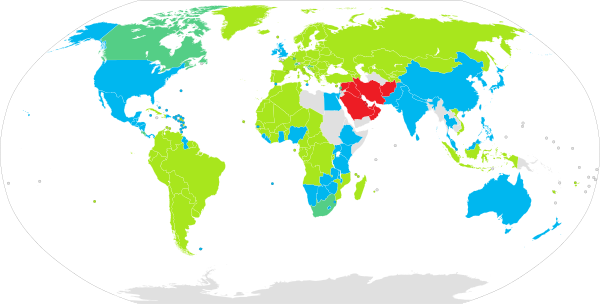 In Countries where the comma is not used as decimal separator (not-green countries in the picture), it is used as list-separator, for example when you want to list the elements of a set. This is also the international standard:

In countries where the decimal-separator is a comma (green countries), the semicolon is used als list-separator:

Oh the hours I've wasted on these kinds of problems!

Not the answer you're looking for? Browse other questions tagged numbers or ask your own question.

9
How are probabilities written in German?

17
How to write ordinal numbers in German?
6
When do we capitalize numbers or fractions?
75
Why are German numbers backwards?
1
How to count the numbers downward
6
Problem: listening comprehension improving steadily *except* for numbers
0
Numbers working as adjektives
2
Numbers working in place of nouns
2
Numbers in Swiss-German dialects