I'm trying to grasp the difference between Kugel and Ball.

So I took such spiky toy ball kugel thing: 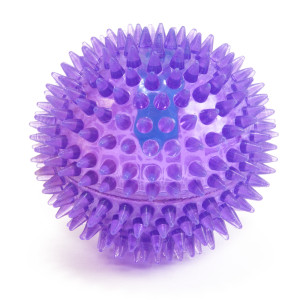 and went to ask a German person what that was. "It's a Ball", he said. "Because it's shaped like a Kugel, but a Ball is serving a greater purpose and is not about the geometric shape." (He really said that!) 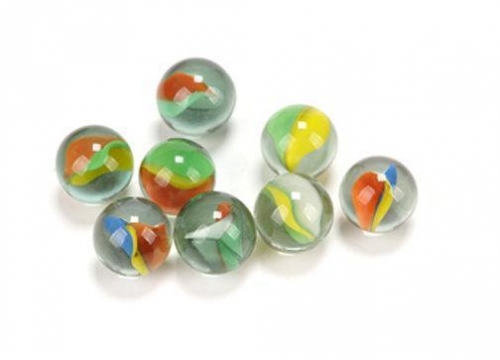 He said, that's definitely more of a Kugel over a Ball. I asked him if marble balls had no greater purpose and he said he didn't know. :(

Somewhere I have read that every Ball is also a Kugel. And a Ball is made of flexible material. But that's not true in all cases, is it? I couldn't really find a satisfying answer to that on the Internet.

It’s rather hard to grasp. Let’s attempt to approach it from different angles.

In their maths classes at school, around year 9 German pupils learn about the sphere which is always called Kugel in maths class.

The marbles are definitely not Bälle, they are Murmeln or Schusser (and give or take probably twenty other regional names). You could describe their shape as Kugelförmig though.

In divination, you would always use a Glas- (for the cheapskeets) or Kristallkugel, never a -ball.

If I had to extract a rule here, it is Ball if it is somehow thrown or propelled and the main incentive. The Bowlingkugel is just the tool to throw a strike. The Billiardkugel doesn’t actually ever touch your hand and the main way of manipulating it is with the queue. But it breaks down with Kugelstoßen which is basically propelling the damn thing (and hoping it hits the sand and doesn’t starve before that). Learn those that use Kugel and treat Ball as the standard case in sports.

Note, however, that journalists with synonymitis may also use Kugel to refer to a ball of the Ball type above, most often in football.

When children play, they will always play Ball and not Kugel. (They might kugel (verb) around, though.)

Some decorative dust-collector is a Kugel much like the divinator’s tool above. Unless of course it is a porcelin football, in which case the Fußball takes precedence.

Moogles have a Kugel on their head, not a ball. Likewise Kokonoe Rin has Kugeln in her hair.

Maybe the final conclusion is that a Ball is something that you can perceive as a toy or that you can throw and play with — this covers quite a few cases but not all of them.

Kugel is the translation of sphere. And most of the objects you play with are called ball, e.g. Fussball, Handball etc. I think it isn't that wrong to say that the hard materials like metal or glass are called Kugel and the softer ones ball. At least I can't think of any one that doesn't follow this rule.

I put the mathematical definition of Kugel aside. Others have elaborated on this quite enough. Instead, I focus on what makes a Ball (usually shaped like a Kugel) different to a Kugel. This can easily be answered by looking at various definitions of Ball.

First off, it may have a shape like a Kugel but this is not necessary; think of American football or Rugby. And it may be inflated with air.

But there are two main criteria which makes an object being called a Ball rather than a Kugel. The first criterion is that it's used as toy or for sports. This alone doesn't differentiate between Ball and Kugel, since some Kugeln are used for sports and games, too.
The second criterion, however, is the key difference to Kugeln. Bälle are elastic. The degree of elasticity may vary. Some balls are still hard to form whatsoever, others break right away when you try to crush them. But they are elastic. This is not true for Kugeln (think of billiard balls, bowling balls, marble balls). Try to form them!

There are similar words in German language, like »Kogel« (round top of a Hill), »Kogge« (broad but short sailing ship), and all of them belong to a family of words round the word »Keule« (cudgel) which is a stick with a thick, round end, and the Englisch word cudgel in fact also is related to this family. In other languages there are similar words for »Kugel«: Danish kugle and Dutch kogel.

So, from it's etymology a »Kugel« is something that is round and hard.

A Kugel can be:

The meaning »bullet« comes from medieval times, when the first guns was invented. The bullets of guns in those times was shaped like balls, and they was hard, so they was named »Kugel«. Later the shape changed, but the name stayed.

Sometimes you can read, that the German word »Ball« (as well as the englisch »ball«) has it's origin in the greek word βάλλειν (ballein) which means »to throw«. But this is wrong. The word »Ballistik« (the science of throwing) comes from βάλλειν, but not »Ball«. The true etymology is a little bit complicated, but very interesting:

The Middle High German word and the Old High German are the same: »bal«, and this is also the Dutch word. The English word »ball«, the French »balle« and the Swedish »boll« have all the same origin, as well as the english »ballock« which literally means »little ball« but means testicle. They all come from the Indogermanic word »bhel«. And »bhel« means: to swell, to well up, to bulge, to blow up.

So »Ball« (in German as well as in English) means: A thing that is blown up.

And so also the english »balloon« and the German »Ballon« have the same etymologic root as »Ball« and »ball«.

Also intersting is, that the indogermaic word »bhel« also transformed to the greek word φάλλος (phallos), which is the greek word for the penis, and this is also something that can swell.

So, under this aspect (»Ball« = a thing that is blown up) it becomes much clearer what »Ball« can mean:

Derived from this usage many round sports devices are called »Ball«, even if they are not really blown up. It is rare, but the balls used in Billard and Bowling sometimes are also in German called »Bälle«, but more common still is »Billardkugel« and »Bowlingkugel«.

The confusion may be sorted a bit if we have a look at the etymology of both words.

So whenever we use Kugel there is a reference to the shape of the body (as also used in the mathematical term) whereas when using Ball we refer to the consistence, and springiness of a mostly spherical body.

I think some of the confusion might derive from the different use of the word of "ball/Ball" and "sphere/Kugel" in English and German:

Ball: in German, "Ball" is related to the construction of the item, i.e. it has a shell and something in the centre (typically air), and is designed to bounce back. Hence a football is a "Ball", but a snooker ball is a "Kugel". There is a slight connotation of that a "Ball" is designed to play games, but I think this rather derives from the fact that they usually are used this way, rather than this being part of the inherent meaning of the word.

Kugel: is a "sphere" in the mathematical sense. In the everyday sense however, it is a ball (English) which is solid, i.e. fully filled with material and does not have a shell. If I did not know the word for Jan's mentioned "Murmeln", I would definitely call them Glaskugeln (and not Glassbälle).

Not the answer you're looking for? Browse other questions tagged differences or ask your own question.

13
Using "nötig" vs "notwendig"
10
Usage of so and also
1
"Hingegen" and "während"
1
Differences between "wusste" and "habe gewusst" in the main clause, and using "kann" and "konnte" in the subordinate clause
6
Difference between "umarbeiten" and "bearbeiten" and "überarbeiten"
0
Using gern + mögen/möchten within the same sentence?
4
Differences between "reichen," "ausreichen," and "hinreichen" and the idea of "enough"
2
Difference between "Migrant" and "Einwanderer"
1
Using a preposition with the verb "passen"