I got a bottle of Black-Wood whisky for Christmas and this phrase is on the pamphlet included. From my searching online, it might mean something like my only vice or it’s my one and only treat but I thought you all here could provide better context. 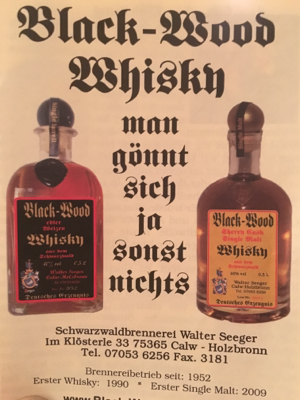 This is a common expression. The phrase sich etwas gönnen means to allow oneself something, in the sense of an indulgence. The word man is an indefinite pronoun. The sentence

One does not indulge in anything else.

We do not have other indulgences.

Since we do not have any other indulgences...

The we here refers to someone drinking the whisky. The sentence is used as a jocular excuse for that one indulgence.

I am sure that there are better ways to express these things in English.

The meaning is that you should/can allow yourself some pleasure (by drinking this alcohol). However, nowadays the slogan has always an ironic touch. Common figures are, for example, an alcoholic who say the slogan several times a day (and obviously allows himself too much). Or a very rich person who already owns several cars, buys a new one saying "Man gönnt sich ja sonst nichts!".

During my research I also found Man muss sich auch mal was Gutes gönnen. (A bit of what you fancy does you good.), which is at least in the German translation close to the slogan Man gönnt sich ja sonst nichts!.

Man gönnt sich sonst nichts would mean One doesn't allow oneself anything else, or maybe more naturally There is nothing else one allows oneself.

The ja weakens the sentences in a way that what is said in the sentence is a known fact, so a possible translation is:

As there is nothing else one allows oneself.

I would say, at first look, that the phrase would literally mean:

One just grants himself/herself nothing else.

Man is an indefinite pronoun that means "one", "they" or "you" and it is construed as a 3rd person singular. It is the subject of the sentence and it refers to the reader of this pamphlet.

Gönnt is the 3rd singular person (man + gönnt) of reflexive form of (sich + verb) gönnen verb. Here, sich etwas gönnen means to allow or grant oneself something, as gratification or something pleasurable.

Ja, that basically means "Yes" in German, is an adverb and it is used here as intensifier, to emphasize something that is a known fact (the whisky is so good that you don't need anything else). As intensifier, it could mean "really", "just", "of course" and so on.

Sonst is an adverb that means "normally", "otherwise", or "else".

Basically, the phrase would mean that there's just nothing else better than this whisky for you.

Considering the context (you drink some whiskey for your own pleasure), I would say that the phrase means:

Of course, one doesn't indulge in anything else.

One doesn't indulge in anything else, as you know.

Indulge yourself in nothing else.

1
Looking for comprehensive English-German dictionar(y/ies) in a database format
21
What means my car's displayed diagnosis “KÜHLMITTLE NIEDR MOTOR ABSTELLEN”?
5
How to say “does that count”?
1
What are the differences between 'die Gerechtigkeit' or 'die Billigkeit'?
11
What does “die Augen aufschlugen” mean?
3
To “get something going”
7
Translating “beschränkt” in a mathematical/physical context
1
Expressing “off the hook” in German
1
Translate “Wenn der Teufel dieser Stadt etwas Böses antun will, lässt er noch einmal so etwas wie die Schlange bauen.”