What is the difference in usage between “Möhre” and “Karotte”?

I've been doing a bit of German practice and encountered the words Möhre and Karotte. Supposedly, they both mean carrot, but I can’t see where these would differ in usage. Any ideas?

The use differs from region to region.

The linguistic atlas Atlas zur deutschen Alltagssprache shows the areas of distribution of „Möhre“, „Karotte“, and other variants: 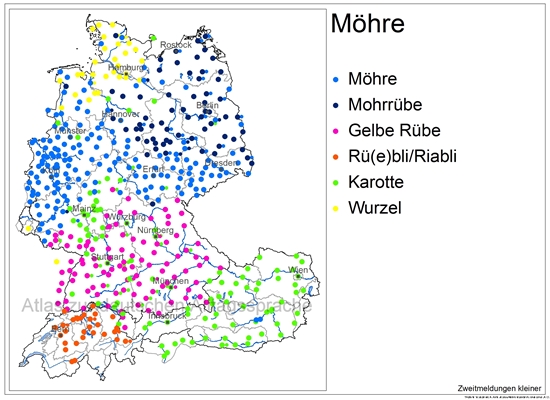 In theory they have different meanings: Möhre is the species (Daucus carota), and Karotte is one subspecies (sativus) of Möhre, but as the Karotte is the only commonly cultivated form subspecies of Möhre, they are synonyms as long as you are not talking to a biologist.

I'm from the southwest where "gelbe Rübe" is a commonly used term (see Loongs post), but in my experience it's not really in use elsewhere and people might have difficulties understanding it.

"Möhre" and "Karotte" are both pretty well understood everywhere in my experience, so you should be able to use whichever.

If I know nothing about the audience (i.e. regional preference), I'd personally use "Karotte" for more formal settings (e.g. scientific work) and "Möhre" for more informal settings (e.g. childrens books or restaurant menus), simply because "Möhre" sounds softer than "Karotte". This is entirely subjective though and might be caused by the order in which I was exposed to the different terms.

There is no difference in meaning, but these two as well as the missing third term gelbe Rübe have (in my opinion: strongly) different regional distribution. So in conversation, simply switch to the other term if receiving strange glimpses.

As others already said there is no difference in the meaning of Möhre vs. Karotte apart from a regional different preference in usage.

When looking at the etymology of these words we may find a clue as to why there are so many apparently different words for the same thing in contemporary German.

The oldest words are Möhre and Rübe that were already known in Old High German (mor(a)ha and ruoba), used for almost every edible plant root (Wurzel) in those days. Regionally Wurzel is also used for a carrot until today.

To sub-classify these edible roots we used their color with Rübe, hence the terms weiße Rübe, gelbe Rübe (the color orange was not yet defined those days), or rote Rübe (used for beetroot).

This color code is present untit today but at the time the color scheme was applied in some regions, other regions started to exclusively use Möhre for carrots. This also is why we have the mixed-up term Mohrrübe.

Karotte on the other hand is a relatively new word introduced as a loanword from French carotte (from Latin carota) by the end of the 16. Century. It is used until today, sometimes in parallel with the older terms, including the botanical term daucus carota sativus.

Not the answer you're looking for? Browse other questions tagged word-usage differences or ask your own question.