"Nein" vs "nee", is there any difference?

The only time I've ever seen Germans say nein is in the movies or in textbooks. I've also heard a politician say nein when she wanted to make a strong stand again a comment. I'm guessing nein is more forceful and formal language than nee, which seems to be slang.

So I'm guessing if I don't want my language to seem weird I should use nee to negate a sentence and not nein, especially with younger people and in casual settings like a bar. Or is my impression wrong?

If you want to learn German, then you learn standard German, which will be understood in all countries where German is spoken. But »nee« is not a standard-German word. It is a dialect word. »Nee« is part of many dialects, spoken mainly in mid and northern parts of Germany. But there are also German dialects, where »nein« is another word: 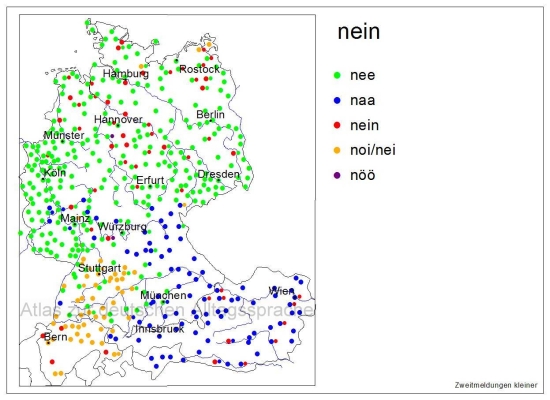 If you really want to learn one of the many German dialects, you better should learn standard German before. So do not replace »nein« by »nee«. Everybody will understand you if you say »nein«. And even if you say »nee« in a region where people use this word: Nobody will believe, that you really speak the local dialect as long as you have any non-German accent.

“Nee” is not slang, it's simply dialect. This form of “nein” occurs in more than one, but definitely not in all German dialects.

I am from Berlin, and even though I do not speak a real Berlin dialect, saying “nee” is one of these things that happen when I speak sloppily, but not in all instances, so I say “nein” often enough and would not find it in any way strange if someone else uses it, especially not if German is not that person's first language.

No, there is no difference. only that "nee" is slightly more slang. You wouldn't use it in an official paper.

While others have stated it is dialect, I personally would say that saying "nee" is acceptable and will be understood in every German-speaking region, it may just not be the most common way of abbreviating "nein".

I speak little German and understand far less spoken German but I did spend a few months in Koblenz. I almost immediately adopted "nee" because it just sounded so much more polite after hearing it a few times.

My mother is from Lübeck. Nee is used when correcting a thought or speech the way Americans say, “bring me one, no, two beers” or if someone says something and you are correcting them. Nein is used if you want something or did something or against an action “I want to go somewhere” Nein!

Nein is final, while nee is arguable.

I am a journalist and native German. NEIN is the official word for "no". Therfore you should always use it for formal exchanges/ official purposes. Also use it in private conversations when ist gets serious/ you want to make a clear statement. Nee, nö... is pure slang and dialect used in the northern regions, like Hamburg where I come from. Yet every German will understand it - just like na, noi... slang/ dialect that´s more used in the southern parts

I usually use "nein" only if I want to make sure the other person gets the answer right (and there is not much context, mimic and gesture involved). Any situation in which a misunderstanding would force the person to ask again. E.g. at the city administration or at the counter of the supermarket when people have to ask me if I have a paypack card.

I am native German (with Swabian / south-western-German dialect). Usually I use several forms of saying "no": "Nein, danke" when declining an offer, but in general I am switching between "Nö", "Nee", "Nein" or "Noi" unconsiuosly depending on mood and situation, whereas the latter "Noi" I may mostly use when I am among other Swabians.

I think that all of these variants are generally understood by Germans, but when talking to someone from an other region of Germany, the Swabian "Noi" might be considered as inappropriate - like "He is so uneducated, he can't get over his rural dialect".

Not the answer you're looking for? Browse other questions tagged slang standard-german spoken-language or ask your own question.

25
Are there any German Internet slang acronyms like "LOL"?
3
Are there any resources to learn German using the 10000-sentence method?
4
What is the difference between drin and darin?
2
“One in twenty” Translation Difference
0
Difference in Meaning Between "be-," "er-," and "ver-"
0
Difference between "in" and "zu" regarding time
1
Is there any rule related to the position of 'nicht' in a sentence?
2
The American slang term "ayyyy" and the context it encompasses, is there a German equivalent or would it just be the same?
2
Is there any German resource that airs television programs and/or films, with transcriptions, that can be easily searched?