Demographics and geographic use of “oder wat” (alternatively “oder Watt”)

I recently visited a major manufacturer of electrical equipment in Berlin. Among engineers and technicians I frequently heard "oder wat?", with 'wat' being pronounced the same as one would pronounce Watt in German (as in the unit of measure). I wasn't sure if it was a play on words given that Watt is used frequently in that environment, but after googling a bit it seems like "oder wat" and "oder Watt" return a few tens of thousands of results (with the former being more popular) as a synonym for "oder was".

I was wondering if this is an expression limited to a geographic area in particular? I know that "oder was" is quite strong to begin with (i.e. not something you would/should use at work or in a formal context); so is this simply dialectical use and therefore "OK" (note the quotes), or does it have any added meaning/emphasis? I was also curious if it would be seen as a marker of someone of a blue-collar socioeconomic background?

As others have already stated, it has nothing to do with James Watt or the SI-unit Watt. It is merely a dialectal pronunciation of was.

Historically, this difference derives from the High German Consonant Shift.‡ Proto-Germanic had a plosive sound /t/ at the end of the words which would turn into es, das and was. This sound shifted in High German to become /s/. The shift has been dated to around 600 AD according to Wikipedia. Since the shift only affected High German, other Germanic languages such as English (it, what), Dutch (het, het, wat) or Swedish (det, -(e)t, vad). 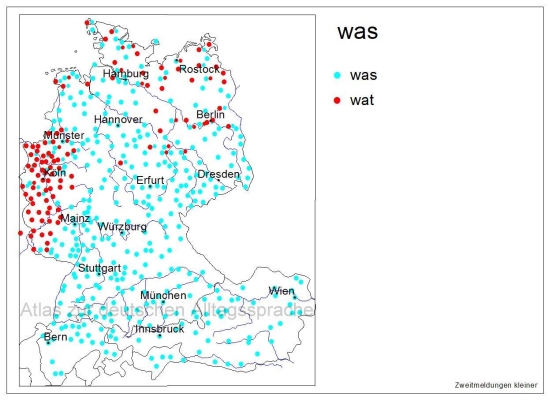 You can still see the St. Goar line in the very West but it has disappeared when leaving the Rhine area eastwards. However, when speaking their traditional dialects, people North of the St. Goar line will always use wat.

The Atlas der deutschen Alltagssprache is a survey-based attempt to research the colloquial use of German across the German-speaking area. It does not attempt to capture only dialects or only standard German but rather the language actually spoken — often a mixture between ‘pure’ dialect and ‘pure’ colloquial standard German. (Thanks to Chirlu for reminding me to point that out.)

‡: It’s not entirely correct to say that was is Upper German while wat is Low German. Low German is usually defined as northwards of the Benrath line which separates the pronunciations of to make (maken in the North, machen in the South) and Upper German (sometimes unclearly called High German) usually as southwards of the Speyer line which separates the pronunciations of apple (Appel in the North, Apfel in the South). The St. Goar line separating was and wat is in-between these two, in the area usually called Central German. It does separate a number of dialects from each other, most notably the group of Rhine Franconian from Moselle Franconian.

All Low German dialects will use wat and all Upper German ones was, though.

German has a large number of dialects and of regional variants loosely based on the dialects of a larger area. One of the fundamental differences between these dialects is whether they participated in the High German consonant shift or not. Part of that shift was that words such as wat and dat became was and das. This map shows the approximate distribution of the variants: 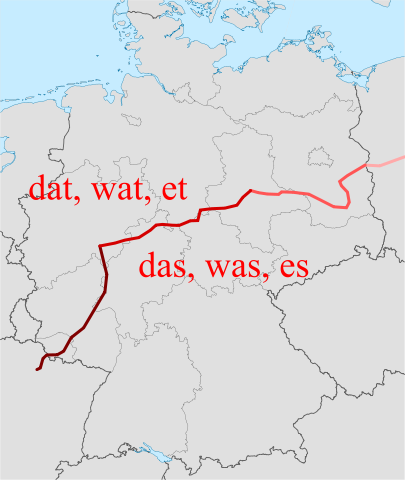 Although standard German uses was and das, people from the northern half of Germany may occasionally say wat and dat instead. It is completely unrelated to the SI unit Watt, which was named after James Watt.

I don’t share your perception that oder was is “quite strong”, if you mean strong language. It may be unsuitable for formal texts but that is purely for stylistic reasons.

You are indeed right, "oder wat" is a synonym to "oder was". It is just an even more colloquial term for it, you would not use any of them in written German. You can literally translate it to "or what" in english, the usage is the same.

Its usage is not limited to an engineering background tho, its has no relation to the pysical unit "Watt".

I don't have reliable information about the geographic or demographic use of it, but in my experience it is most common around middle-aged people. I don't think I have ever heard younger people use that term. Maybe someone else has more detailed information about his topic.

36
Kann man sich entschuldigen oder nur um Entschuldigung bitten?
5
Why “ein Uhr” and not “eins Uhr”
4
“I am undecided between X and Y” - Expression
5
Is “es macht mir Freude” correct and used?
6
Wieder- oder zurückkommen?
5
Can you use “unter der Sonne” to express the idea of “the best there is in the world”?
2
How to use the expression “also echt” in conversation?
3
When to use the expression “Das lass ich mir nicht zweimal sagen!”
4
Use cases and explainig for “Mahlzeit”