Handschrift in Bible inscription – what is this word?

The following inscription is in a German Bible I inherited. What is the word I have enlarged below the first photo? The German looks to me like the following:

I believe the translation is possibly (for now without rearranging the order):

The ninth of March 1814 was to me a little son into this world born we have to him the name Johannes in the holy [?] given/imparted[?]?

(Is mit gedeild an older version of mitgeteilt?)

I'd assume from context that it's supposed to be

Mitgeteilt probably means given / imparted / assigned, which would be zugeteilt in modern German. The standard meaning of mitteilen is to inform somebody about something.

The text reads like a birth notice and as such it is only natural for the word you are looking for to read something like Taufe — it is spelt Dauffe here.

1814 predates all normalised orthographies of German, so the spelling in this text is essentially random as long as the letters give the sounds they should. This explains why some words look so different from nowaday’s spelling, notably mit gedeild (mitgeteilt), Dauffe (Taufe) and Mertz (März).

The entire notice translates to:

On the 9th of March a son was born to me into this world (full stop missing) We have given/assigned him the name of Johannes in the holy baptism — 1814.

Thanks to both of you. I do believe that you are correct about the word being an old form of the modern word "Taufe."

It does look like 'Dauf-e', because the long 's' doesn't usually have a cross bar. However, other writers in the same family group used the character in the superscript as an 's'. I have decided to post an earlier birth announcement from the same family (a generation earlier) to show the use of this 's'. Note the 'S' on the front of the words 'Sohn' and 'Sein' on the third and fourth lines. (I thought it looked like a fish standing on its head, so I called it a break-dancing fish.)

I suspect that the writer in my first post was not very educated, and couldn't spell, so it's possible that he misspelled 'Dauffe' as 'Daufse'? He was a German-immigrant farmer, born in Shenandoah County, Virginia, and moved to Licking County, Ohio. The dialect in America may also have diverged somewhat? 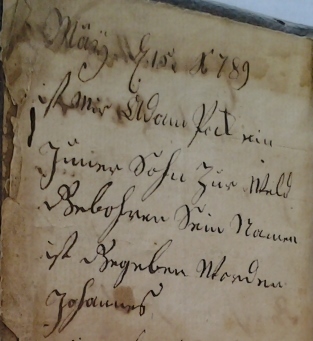 10
Erkennung einer alten Handschrift
0
Translation for an autographed inscription
3
How to Translate this Handwriting into Legible Text
4
Have been trying to translate this.. hoping it some info of a great grandfather
3
Full address of this letter?
5
troublesome Gothic script word in Bible inscription
3
Interpretation of one single handwritten word
0
How to Decipher this Handwritten Word
0
Interpretation von Kurrent Handschrift
1
Transcription of letter in Kurrent ca. 1880 - difficult word