A teacher, I once had (native German), said there are three translations for English "there is/are":

I've only heard "es gibt" before. Is this a regional thing? Do people actually say the other two?

According to the Atlas zur deutschen Alltagssprache, "es hat" is a variant that is mostly heard in the south-west of Germany and the German-speaking parts of Switzerland. 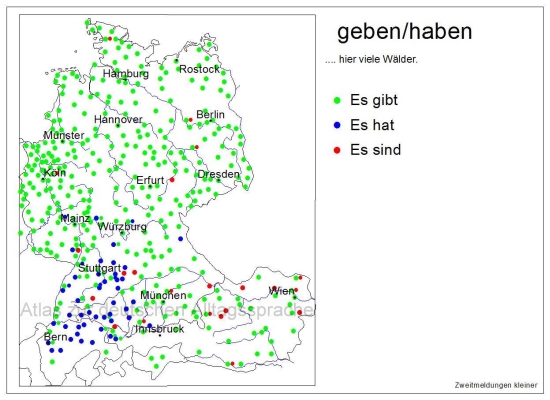 Note that the examples are somehow constructed. I'd use "Es gibt" e.g. to explain which points of interest are somewhere, like "es gibt an diesem Platz eine Pizzeria, ein Museum und einen Zauberstabladen". You can of course also say "an diesem Platz befinden sich [...]", which may sound a little more sophisticated.

I was hoping to have some feedback from some of my more learned Yiddish correspondents before weighing here, but in the absence of prompt replies to my inquiries I’m going to answer from my own incomplete personal knowledge. We definitely don’t use “es gibt...”: that would be the surest giveaway of a German-educated person trying to speak Yiddish. If anything it would have to be “es git…” like the Swiss, but even that does not seem to be idomatic with us. The two forms I know for sure are:

“Es gefinnt sich a wâgen af der gasse…”, where the “ge-“ prefix has somehow become a part of our present tense, and

I notice from a discussion in another thread (which I can’t recall at the moment) that “findet” is also used in German, and with a bit of the reflexive going on as well, although not identical in form to ours. If I get some better information on these usages, I’ll post an update.

Stick with "ist" says the native, you can't go wrong there. If you want to sound more "elaborate" use "steht, parkt, fährt" for the respective situations.

Not the answer you're looking for? Browse other questions tagged translation regional synonym or ask your own question.