Does the word "Fahrenheit" mean anything in German?

Is Fahrenheit a real word in German? Does it come from a concept or from a name?

The German physicist Daniel Gabriel Fahrenheit was the eponym for the temperature scale still used today. This is an excerpt from his famous publication on the freezing point of water: 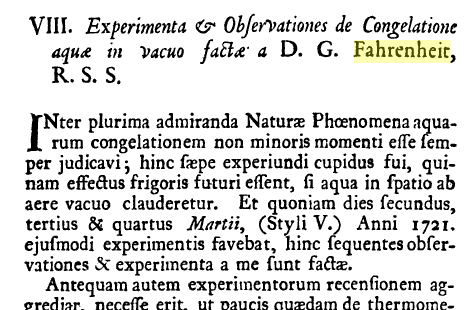 As the other answers have already pointed out, "Fahrenheit" is simply the name of the physicist who invented that temperature scale.

However, since the German language makes good use of word compositions, one could try to construct something from its only possible parts, "Fahren" and "Heit".

"Fahren" is an infinitive form of a verb and can be translated to "to drive".

"Heit" is only used as a word suffix DE: link is in German only in Standard German, often describing a condition specified by its prefixed word. For example, "Schönheit" will describe the condition of being "schön", i.e. beautiful. You will find "-heit" mostly in conjunction with an adverb, sometimes also a noun, but not a verb such as "fahren". In English, a related suffix would be "-ness" (as in happiness) or "-hood" (as in childhood).

So no, even if you would decompose it syntactically, the word "Fahrenheit" wouldn't make much sense.

The closest nonsensical English translation would be something like "drive-hood" or "drive-ness".

If we want to know more about that family name, we'd have to turn to onomastics - something I don't have much experience with, so take everything said below with a large barrel of salt.

A quick search leads to a possible explanation:

Daniel Gabriel Fahrenheit's family roots seem to be in the Hildesheim or Rostock area - both places in Northern Germany where variants of Low German were spoken.

In this light, "Fahren" could be derived from "varen", which could be Low German for "vor dem"DE, translated to "in front of the".

"Heit" might be an old or Low German spelling of "Heide"DE, which translates to "heath" or "moor".

So maybe the family lived at a place near a moor or heath, and that's where their name came from.

No, Fahrenheit is just a proper name - not even a very common in Germany. Daniel Fahrenheit was Prussian physicist who proposed the temperature scale in 1714. It's worth mentioning that the Celsius scala is the official one in Germany though.

The only meaning you'll find in a dictionary is - like in English - the Grad (degrees) Fahrenheit.

As others have pointed out, "Fahrenheit" is a proper name. According to the Online Etymology Dictionary, that is

This suggests that the name is a short form of "Erfahrenheit" which would be more precisely translated as "the state of being experienced".

Fahrenheit, Celsius, Réaumur and Kelvin were all physicists whose names have been used to name a temperature scale. None of these words has any meaning in German, except as their use in naming temperatures, like

Any attempts to pull the word Fahrenheit apart and trying to give it any meaning based on the parts is nonsense.

Fahren means to drive and heit is a suffix that makes an adjective a noun.

E.g. schön=beautiful and schoenheit=beauty. So Fahrenheit means loosely interpreted the state of driving.

As stated before, the literal translation of "Fahren" being "to drive" and the suffix "heit" being "the state of" would literally give the direct translation as "Driver" (ex. the actress Minnie Driver)

I'd translate Fahrenheit as "homelessness." Fahren, to drive, or, loosely, to be "on the road." -heit, state of being. So, the state of being on the road, which, if considered as a permanent state, is not having a home.

Not the answer you're looking for? Browse other questions tagged meaning etymology or ask your own question.

3
What is the meaning of the name "Fahrenheit" (or its etymology)?
1
Bedeutet "Fahrenheit" etwas außer einer Maßeinheit für Temperatur?