I’m curious to know whether Low German dialect is still used in Germany or not.

If so, in which areas? Is it both either spoken and written or only as a colloquial spoken language?

The Low German dialects are still spoken in northen parts of German, and in eastern parts of the The Netherlands. These dialects are not reflected in everyday writing.

There is a map on Wikipedia depicting regional distributions of Low German dialect variants:

There even are radio and TV shows in Low German (Platt). Mostly for documentation, and to preserve the dialect, we may also find written text in Low German. However these text are not officially used.

The low German dialects, collectively often termed Plattdeutsch, have been declining for quite a few centuries but they never became fully extinct. This had to do with the perception of dialect speakers having a lower social status, being from the countryside, enjoying lesser education and all sorts of other prejudices. For some reason, these always affected the North more than it did the South where dialects are more often perceived solely as regiolects and not as sociolects. An anecdotocal case in point is a former colleague of mine whose parents live in a village where occasionally Platt is still spoken. She said she understood it but couldn’t speak it herself.

On the other hand, more modernised if you wish versions of Low German dialects are and have been emerging across northern Germany. These dialects are much closer to what is taught as Standard German but still contain marked phonetic and semantic influences of the older Plattdeutsch dialects — for example the use of lütt instead of klein for small. These newer dialects have a much stronger speaker base and will probably survive.

In recent years, however, there have been marked efforts to preserve the old Plattdeutsch and to teach it to the young generation; including staging theatre performances in Platt and more. One of the key players here is the Ohnsorg-Theater in Hamburg, which exclusively stages plays in Platt.

Concerning the question about written versus spoken: Since the establishment of a more or less common spelling of German, influenced largely but not solely by Luther’s bible translation, written German was always more or less a variant of Standard German and rather far away from most actually spoken dialects. No official writing system for any dialect ever truly existed. However, in all parts of Germany traditional stories such as fairy tales were often told in dialects and thus sometimes written in them as well; one of the most well-known examples of a text written in Plattdeutsch is Von dem Fischer un syner Fru (Of the Fisherman and his wife). The late 19th century saw a rise of dialect literature in many parts of the country and though I would know most about the Bavarian examples (see my current avatar) I would be very surprised if there weren’t also marked and well-known (across the North) Plattdeutsch examples, too.

The principal difficulty with writing in Platt is that every village has their own forms, pronounce at least some word slightly differently such that there is no common codification system in use. Also, some phonemic features of northern German are very hard to codify into writing — arguably, getting the Bavarian Stoa or even Huosi correct from scratch is much easier than producing something that renders the Hamburg pronunciation of Stein well. Official documents have probably not been written in anything Platt-like since the fall of the Hanse.

The areas associated with Platt are well shown in the map in Takkat’s answer. Traditionally, the Uerdingen line is associated with the border between Low and Central German; ‘Low’ being the northern dialects. The common feature of all of these is the usage of i(c)k and related forms for I rather than i(s)ch (or i in the very far South). 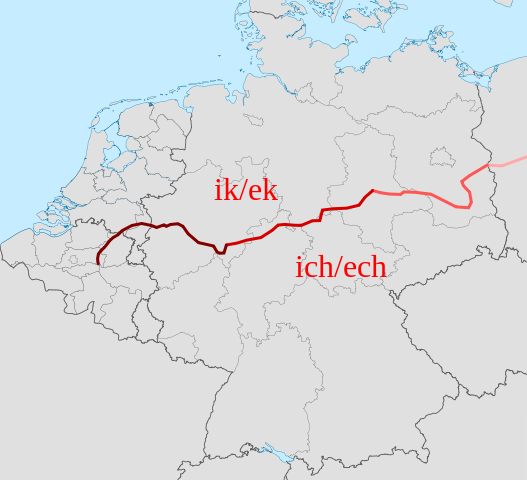 Not the answer you're looking for? Browse other questions tagged dialects low-german or ask your own question.

26
Is there an online German dialect dictionary?
0
Is this a dialect of German or incorrect usage of the language?
4
What is “Hochdeutsch”? Which dialect should I learn?
15
Do Germans understand Pennsylvania Dutch (Amish German)?
13
Dialect of a story from the “Koch-Buch für die Deutschen in Amerika” (1897)
2
Looking for the origin of a possibly idiomatic German phrase, 'schnapp-shnoot'
7
Is the Schwäbisch German dialect used more than regular standard Hochdeutsch in Baden-Württemberg?
6
What are some words only used in Hessen?
3
Is the Berlin dialect strongly influenced by French?