What English IT Phrases/Words Should Not be Translated into German?

Working in the German IT industry as an English speaker, you slowly get the sense of which English words and phrases should be used in German and which should not, e.g.:

Does anyone have an exhaustive list of these, including programming terms such as "for-next-loop" and "inheritance" etc?

It depends on your audience: In my experience IT guys tend to use English terms a lot, since a lot of the existing literature is in English anyway and nobody cared to invent/establish the "correct" translation. There are a few exceptions to that rule: When speaking, e.g. hard drives will often be referred to as "Platte(n)".

Some people (e.g. my university professor) insist on using German terms as much as possible, in this case I just go with their request. Same goes for other groups of people which may be unfamiliar with IT stuff, older or not speaking English very well. In this case terms like "Reiter" for tabs help, since e.g. my parents are (due to their age) familiar with "Hängeregistern" (the thing in the picture) and the "Reiter" on top of it. 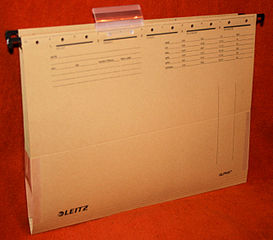 There is no definite list, since it depends on many factors, like your audience, the topic, the situation.

But especially with IT terms the recommendation is to use those in English. It's for example hard to use a German IDE, since all the common terms like compile, build, package, deploy are often not even recognizable in German. This recommendation is not only a matter of taste but has a very practical side. The other week I had a problem with my Oracle application server and it would print out the exception message in German! While this might be more understandable to me (assuming it was not translated by a machine), it's of no use putting it into Google in the search of the source of the error.

So, whenever technical terms are involved, there should be no translation in order to have a common and worldwide base. But besides them, when it comes to business discussions, especially if done among Germans only, there's no need to use all those "Bullshit-Words" managers like to...

At first I disagree that "Reiter" for "Tabs" is borderline. It's a lot below the belt! I've got a task where "Reiter" was mentioned and long I have no idea what's going about in that task because the only translation that, for example, Google Translator gives, is 'rider' or 'horseman' :)

It strongly depends on what environment you're working in. If you're working in pure German environment, it's probably OK to translate everything possible, as long everyone understands... But when you're going internation, or considering doing so in the future, you should keep at least the terminology in English.

In my opinion, German translations of IT terms are too hermetic, they are simply not understood by people from outside, even if they have quite a good German skills (the infamous Reiter attacking).

Additionally, try to find help to change some settings of Windows or Firefox, if you're using German version. The solutions are mostly in English, and you have to think hardly, how how could that option be called in German to apply such solution...

From my experience, people tend to translate everything, including "inheritance". But then they have tremendous problems using English documentation and stick to German translations only. It's your choice, anyway. Just be aware of consequences.

Not the answer you're looking for? Browse other questions tagged word-choice or ask your own question.

13
Which words or phrases should non-native speakers avoid to prevent unintentional offense?
7
What is the best way to translate "all the" if not "die ganzen"?
4
English/German one word for "in progress"
3
What is the difference between the words "Ergebnis" and "Resultat"?
13
What should I reply for "Sorry" / "Entschuldigung"?
3
How would “add folder” and “add file” would be translated in the shortest way into German?
3
Translations of "child psychologist" into German (nouns with preceding multifunction adjectives)
1
Is there a commonality in German "lächeln" and "lachen" which is not in English "to laugh" and "to smile"?