I recently got a Deutsche Grammophon CD with recordings of songs by Dietrich Fischer-Dieskau. When reading the texts, I noticed the translation of the title of one of the songs. Intuitively I knew it wasn't correct. The only reason why I'm posting this question is to find out if there's a better translation.

Anyway, the German text is "Blicke mir nicht in die Lieder", which is translated as "Don't look at my songs."

In my naive opinion (no German speaker) this is a poor translation because there's no posessive about the songs in the original sentence. The mir is more like a dative (?) (don't do this to me).

Intuitively I know the meaning of the original German sentence but the reason why I'm writing is to see if there's a more accurate single-sentence English translation. FWIW I've tried to come up with an English translation myself but it's rather difficult (no native English speaker either).

Credits first: Gerhard has already pointed out the pun that may be going on here, while tofro has shed some good light on the context of this sentence / line, which does sound a bit odd indeed.

Since your confusion seems to lie, mainly, with the Dative case being translated as an English genitive / possessive, I'm adding yet another answer to address that.

While you are right in that a German Dative was translated as an English genitive here, this translation is actually quite accurate. There is something in German called a "dativus possessivus" (possessive dative). This is a dative whose semantics indicate possession:

Notice how English - which doesn't have a dative (any more) - defaults to the possessive in order to translate this phrase?

The same thing is going on in the verse / song title in question:

Hence, I find the translation quite accurate. The only thing that could be criticised is that it loses the beautiful pun pointed out by Gerhard, but I don't see a way either to put it into English and not have it get "lost in translation". If everything could be translated perfectly, there wouldn't be much incentive to learn a language any more. ;)

For further study, you may look into the types of the Dative case in German. Unfortunately, I couldn't find this in English just now, so it's in German. But with a bit of digging you may find an English-language page.

The translation is only half of the story. In this poem by Friedrich Rückert we may also have an old spelling Lied in the meaning of (eye-)lid: 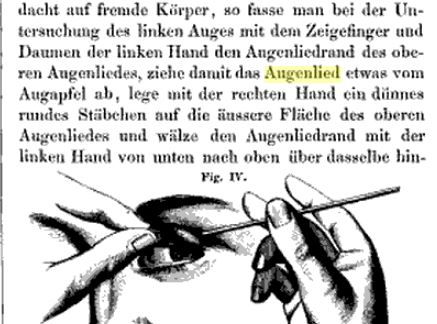 This is the original poem:

Rückert may have intended this pun (i.e. song and eyelid both would have the same spelling) but it was originally written as a poem, not as a song.

That actually is a difficult piece of text - Rückert (the original poet) has left out quite a bit of words in order to make the poem go. The "mir" is actually dative and gives a hint to what's meant and the rest of the context clarifies it further.

The rest of the poem makes it clear the poet doesn't want to show his half-baked lines while he is still working on them - Only when it's done and perfect, it should be visible to the public.

The dative actually is an expression of "don't do that to me", but that is actually hard to express in English.

Don't you look over my shoulder at my songs

would somehow transport the dative.

The construct you are stumbling upon is called Dativus possessivus, denoting to whom the accusative object belongs (In your case the songs, belonging to me). Further examples are:

Hello everyone: please do not mention anymore "song" in this connotation!

There are two meanings of the German Word "Lied":

Not the answer you're looking for? Browse other questions tagged meaning translation word-usage meaning-in-context german-to-english or ask your own question.

12
What is the reason why the translation of “Speed” is “Geschwindigkeit”?
6
Meaning of »abhanden kommen«
4
Is "Eigentlich nicht" the proper way to translate "Not really" (in a specific context)?
13
Who was married?
2
Is there a good abbrev' or an alternative phrase for Exklusiv oder?
5
Du kommst auch nicht zu kurz
3
Role of "einfach" in a certain context
3
Looking for a German translation of "Il faut toujours viser la lune, car même en cas d'échec, on atterrit dans les étoiles"