What would be the proper English translation of »Drops« in this sentence?

The two below paragraphs come from the taz.de article “Frankreich im Wahlkampf. Es ist das Ende einer Epoche.” (My question refers to the next-to-last sentence of the second paragraph.)

What would be the appropriate English translation of the German noun Drops above? According to the Reverso Dictionary,

Is the author really saying that François Fillon is a conservative fruit drop?

jmd., der durch sein Wesen, Benehmen auffällt
(someone who stands out by their nature, behaviour) 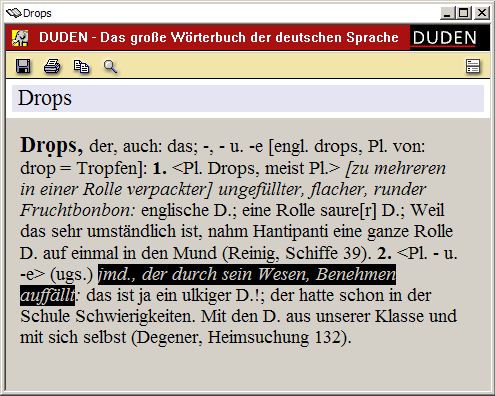 I am actually not completely sure either what this phrase is supposed to mean. I can only offer two stabs into the dark:

There is a colloquial idiom saying

meaning "everything is done and dusted.", "the matter is finally settled and cast in concrete", also sometimes implying it was not the most optimal outcome. This would be the "standard" context the word "Drops" is used in German (at least in cases where you don't relate to the real thing).

How that pertains to the context, however, is not fully clear to me. It might be it relates to the fact they finally had a candidate, even though he was a complete underdog, and so maybe not the best possible choice - but, alea iacta est.

On the other hand, it might easily be the sentence doesn't even relate to that idiom.

The sentence might also relate to the not completely sweet nature of Drops always having a sour end to swallow - This would fit to the predominately socialistic orientation of the French voters having to swallow a sour conservative candidate for the sweet revenge with the leftists that sentence is talking about.

I'd rather have chosen

to transport this intent, though.

Maybe the author was fascinated by a mix of both and thought this was a good metaphor - And in the end failed to explain himself.

I have no clear and obvious explanation to that sentence, but I doubt anyone else has. This is maybe not the best example of illustrative wording.

This is not a standard expression to describe someone in German, so there's no immediate translation that comes to mind. However, we can approximate one by analysing the register and connotations of this expression:

Given all of the above, I would suggest political dwarf as a translation, which conveys most, if not all the meaning of the German expression: dwarf carries the meaning {small}, while political makes clear that this is not meant in a physical way {body size}, but rather refers to his {miniscule impact or significance} in politics. It is mildly {derogatory} while at the same time clarifying that this is not the opinion of the journalist, but rather refers to Fillon's rank in the political hierarchy / public opinion.

Not the answer you're looking for? Browse other questions tagged meaning english-to-german or ask your own question.