Leute vs. Menschen vs. Völker?

An earlier question (see here) asked for the difference between Menschen and Leute. I would like to understand how "Volk" relates to these (like in the Reichstag inscription, see picture below). Is it more professional or something? I mean, it's carved on the Reichstag building, so it's pretty significant... Several dictionaries listed it as more 'folks', but I'm not sure that connotation matches things like this- 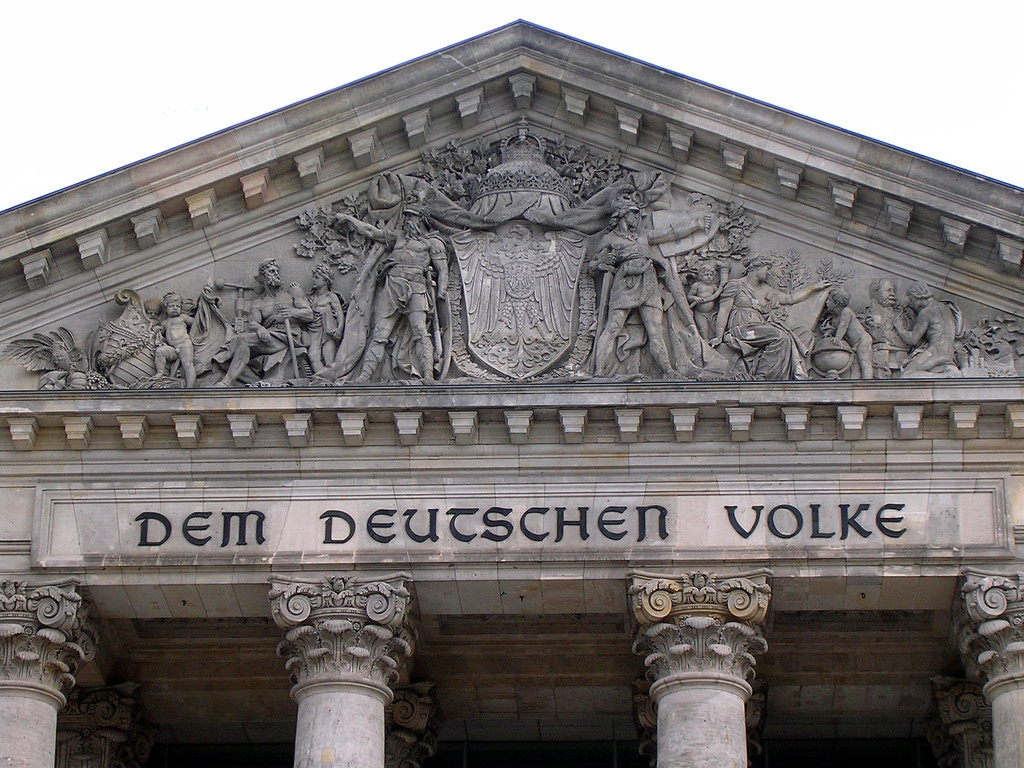 It seems like a very formal usage, at odds with a 'rustic folk' connotation.

How does this compare to the others? They all seem to mean "people," but with different connotations. What are the differences?

There is no word Volken, it's das Volk. It means »the people«, as in the first sentence of the U.S. constitution:

Volk means the whole of the people of a country, in contrast to the individual people.

It's often used in a political context but also in compounds as Fußvolk, Bienenvolk, Volksfest, Volksbank, and Volkswagen.

Volk refers to people in the "ethnic" or national sense of the word. The reference to rustic "folk" is actually a formal one (even if you don't believe that rustic folk themselves are formal).

Leute is a collective noun referring to "people" generally, not to specific kinds, or groups of people, like Volk.

Menschen is the plural of individuals, and is better translated as "persons," than as "people."

Volk shares its root with English folk. Not surprisingly, it has the same meaning as the English word (as defined at m-w.com) in several aspects.
In a plain and general sense, it divides people into groups of culture, history, descent or language.

The word, however, covers much more meaning than this. The population or citizens are a Volk (das deutsche Volk). And so is a herd of animals, a swarm of insects etc. (Bienenvolk).
And the working or lower classes (the common people) are called Volk (gewöhnliches Volk). In the latter case, you can interchange the word with the other words.

Except for the sense of "lower or working classes", there's a plural: "Völker".

Leute is basically a collective noun and means people in general. It shares some meaning with Volk and Menschen when it comes to the sense of "common people".
But it can be used for any group of random people. Like "guy" in "you guys" or "folk" in "Hey folks". It's also used for family or friends ("Meine Leute"). Both senses are unique to Leute and neither Volk nor Mensch(en) can be used here.

Finally, Menschen is the plural of Mensch which represents a human individuum. Both Volk and Leute cannot refer to a single person.

Normally a Volk belongs to one Nation-State/Area of settlement. See point two: http://www.duden.de/rechtschreibung/Volk

Not the answer you're looking for? Browse other questions tagged word-usage usage or ask your own question.

12
What is the translation of "people"? "Leute" or "Menschen" or "man" or "der Mensch"
15
"Personen" or "Menschen"
27
Menschen vs Leute
2
German "für die klugen Leute" specific translation?
1
Which of the following phrases ("Ein Saal voll von Menschen" or "Ein Saal voll Menschen") is grammatically correct?
1
Which of the following notion does „ein Saal voll Menschen“ really denote?
1
Menschen aus aller Welt haben diese Region bereist
3
Leute VS Man - which one is it?
1
Correctly expressing "provisions" in German