Who wrote these handwritten sevens?

Are these German handwritten sevens? (The one looks like a German one, but to me the sevens look like they would be some other nationality.) By the way, writing is 1945.

...... yes I am 100% positive this handwriting intended "177" and the context is electro-penciling of serial number on a manufactured item (a Mauser pistol) by assembly-line personnel. This handwriting does not look German to me and therefore might be that of a displaced worker - out of curiosity I am trying to devine the writer's nationality

Here is an example of two more pistols. The seven of "127" looks normal. The sevens of "177" and "176" appear to have been written, in this different style, by the same person

Thank you all very much for your insightful thought and responses - I have learned quite a lot through your generosity !!!

These numbers - especially the 7 - are handwritten numbers in the

As you can see on this website, in this handwriting script the 7 has a curved top and the horizontal line in the mid:

According to Wikipedia this font was used up to the mid of the 20th century in the whole german-speaking area. So, this 7 is presumably a "german 7".

There are three versions of the digit 7 that are in use in Germany, Austria and Switzerland since the 1940’s:

Sorry, I don't know which versions was in use in Germany (BRD) after World War II, because I didn't find examples of writings from that country that shows the writing of digits.

The British and American seven (upper line is straight, without middle-slash) never was in use in German spoken countries (and still isn't taught in schools here). 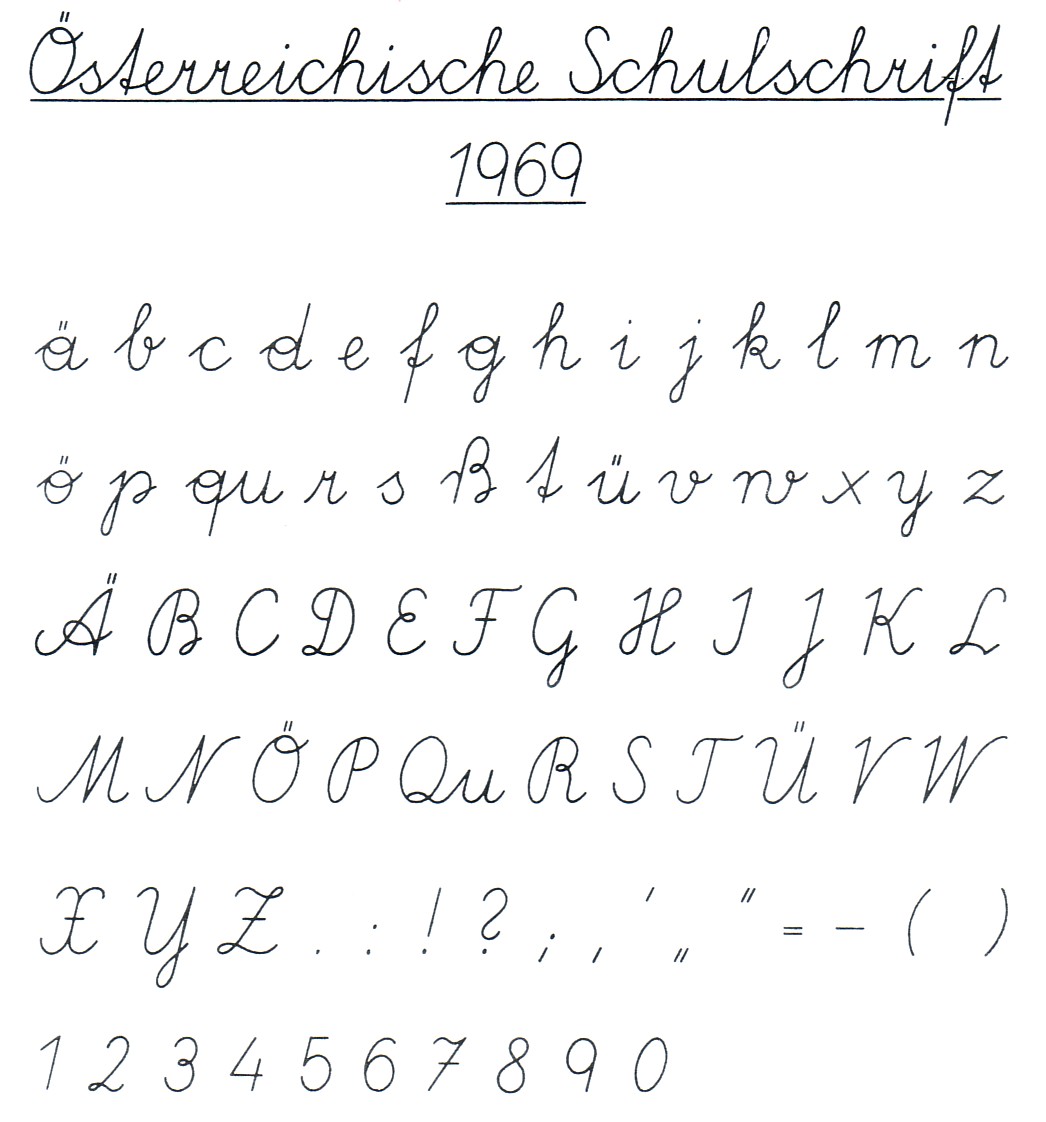 As you can see, the digit »7« has exactly the form you showed (well, with a much more intense curving at the upper line, which I interpret at the writers personal style)

Since 1995 there is an additional form in use in Austria.: 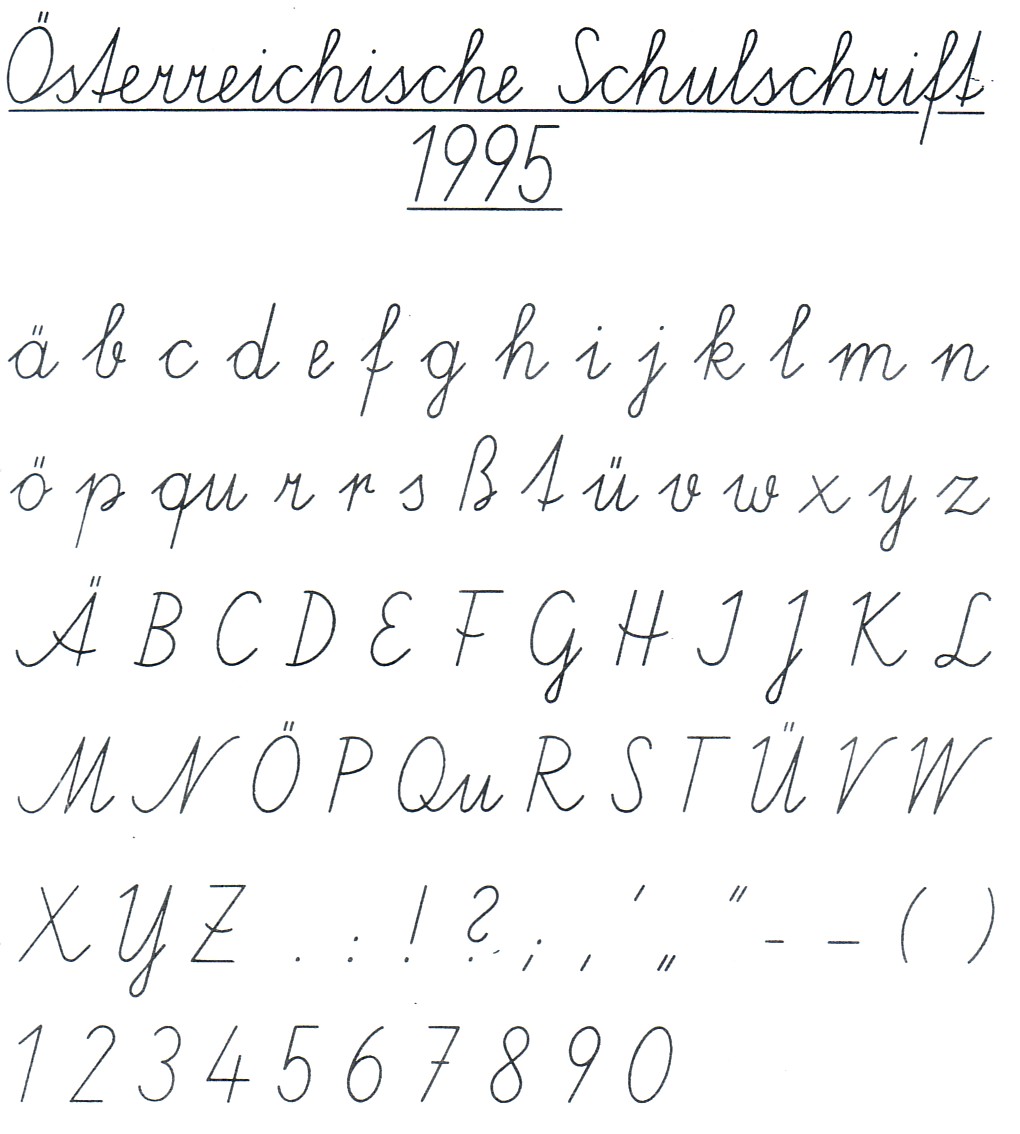 Since 1995 teachers can decide if they teach the writing from 1969 of the newer version from 1995. Both versions (but no other version) are still taught in schools in Austria.

When looking at the digit »7«, you will see that in Austria this digit has in both versions a slash in the middle, while in German schools the digit »7« is taught differently:

This writing is from 1941 and since then it was used in Germany: 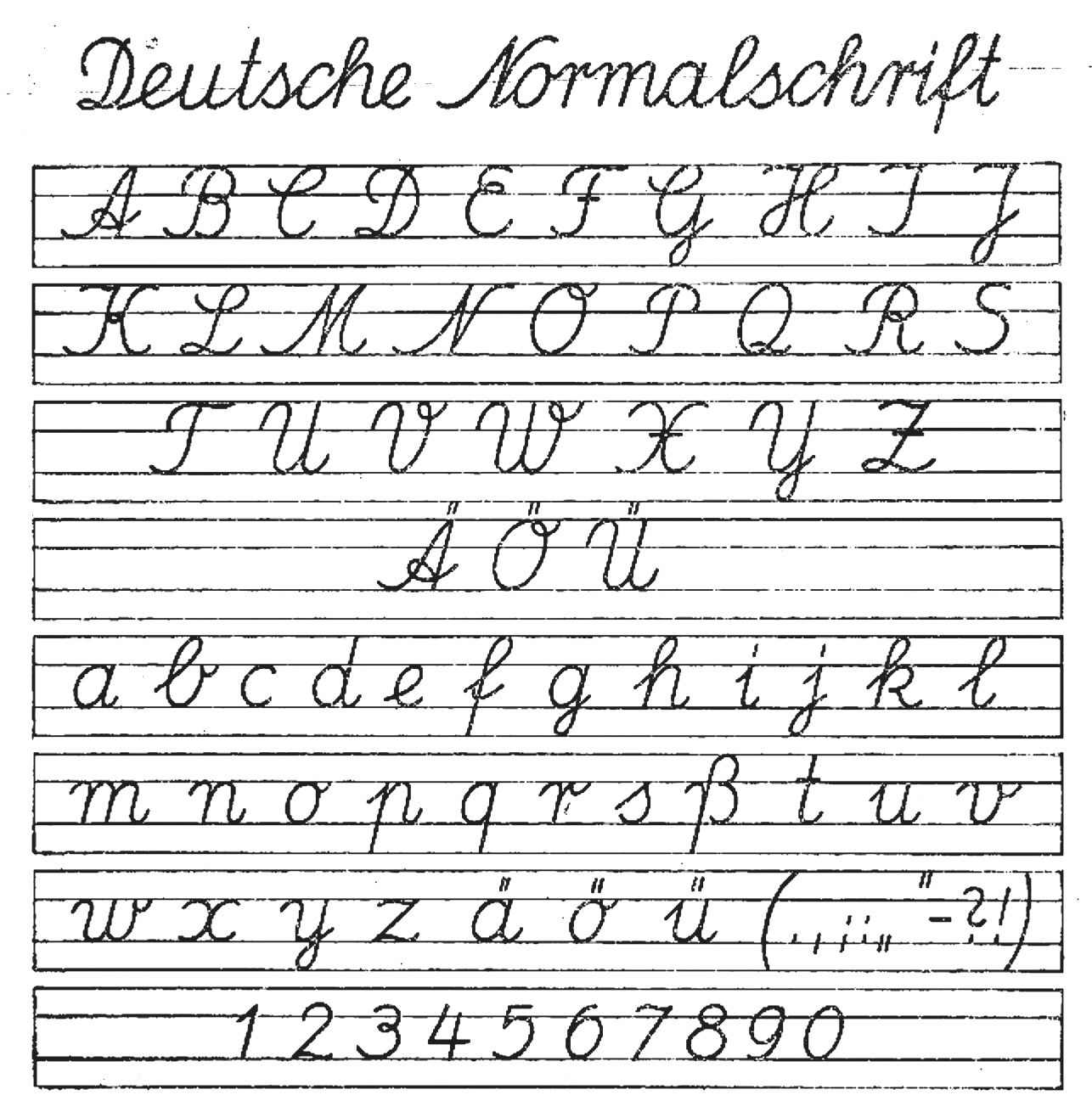 As you can see, the upper line of the digit »7« is curved, but there is no middle-slash.

Sorry, I didn't find examples showing digits for writings taught in BRD after WW II, but here is a writing form 1958, used in DDR: 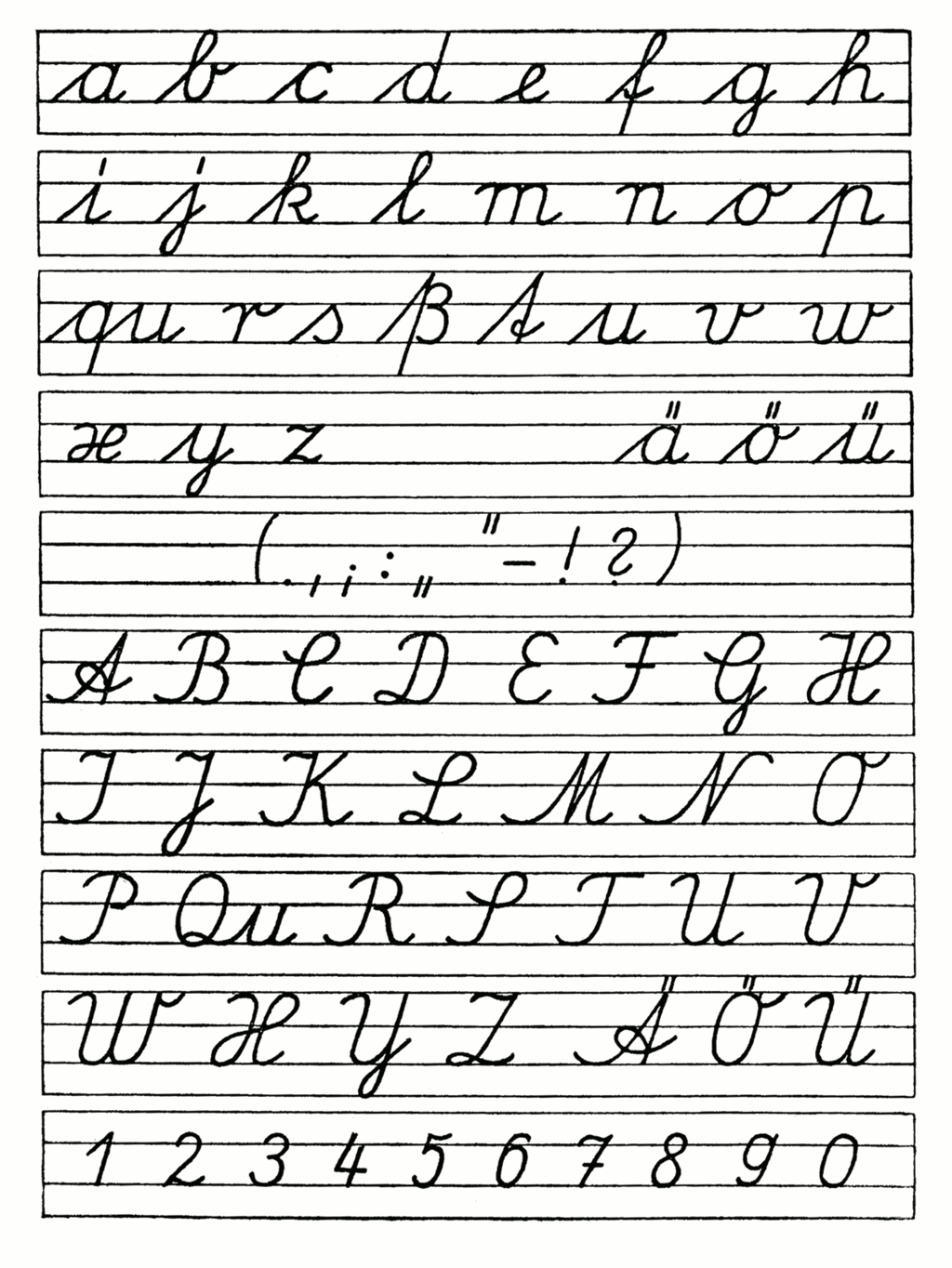 But 1968 he writing was reformed in DDR, and the digit 7 was changed: 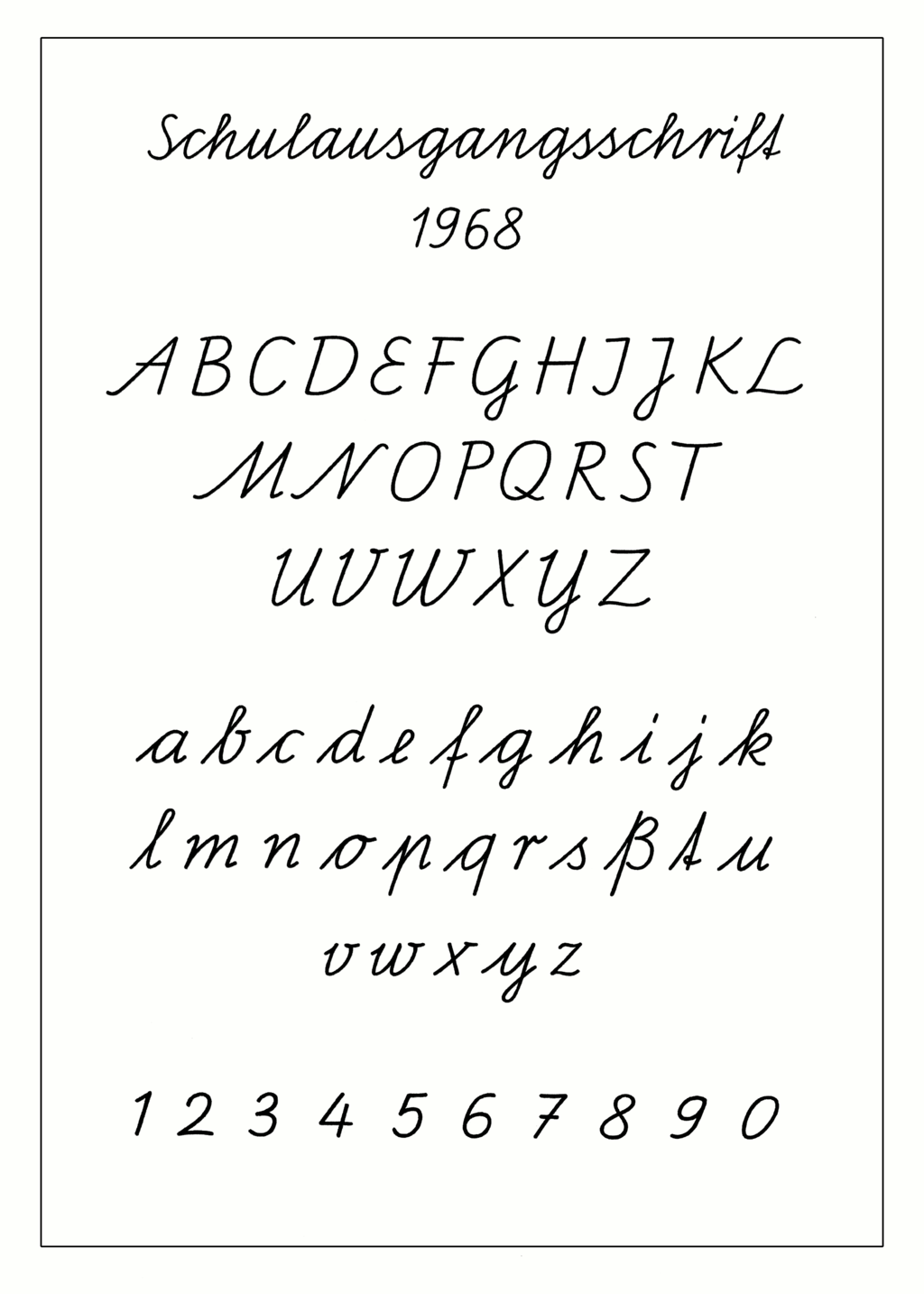 The next example is from Switzerland, 1947: 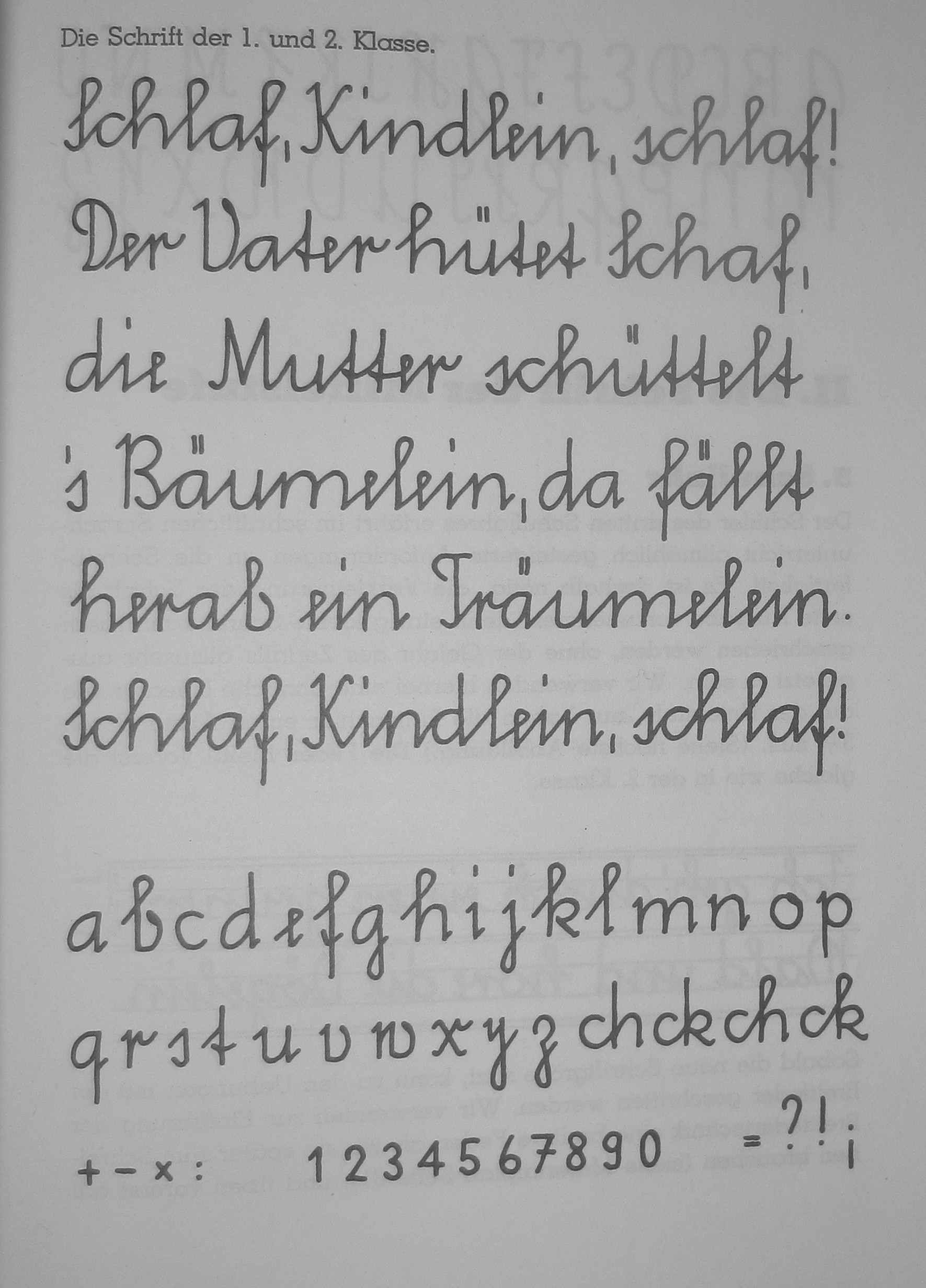 As you can see: The upper line of the digit 7 is not curved, but there is a middle slash

To me it looks like an over-emphasized version of the font I learned at school in 1983, which is the "Lateinische Ausgangsschrift". Unfortunately, Wikipedia only has the alphabet part available as an image, but there's a font for download by Pelikan, a German pen producer, where the numbers are written like this:

So, the 7 has a wavy top and a dash in the middle. That's exactly how I would write the numbers if I were told to write like in elementary school.

I'm generally careful when it comes to handwriting versus PC fonts, because not all letter combinations are available as ligatures and therefore PC fonts have technical limitations. This does not apply to numbers, because the digits are always written separately.