What does “6 Waben” mean on a German train ticket?

I have have a train ticket from Germany:

What does 6 Waben mean? I found that it means 6 honeycomb, but this does not make much sense to me in context.

"Wabe" means "honeycomb". It refers to the (kind of) hexagonal grid that one can often see in maps of the public transport system of a city or region such as this one: 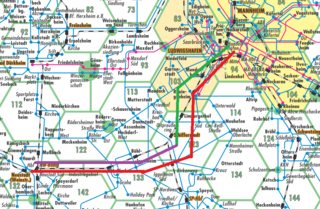 So "6 Waben" means that you may travel with your ticket through up to 6 of the hexagons (including the one where you start).

Traditionally, train tickets were from A to B with every combination of A and B having an independent price not necessarily deduceable from other combinations C and D. What you had to pay also depended on whether you took the bus, tram or train from A to B. Nowadays, the public transport of many urban areas is organised in a transport association that will have the same fare from a number of places close to A to a number of places close to B regardless of the mode of transportation.

Typically, the fares in transport associations will follow some kind of zone regime. Two versions are most popular:

With your ticket, you can cross exactly five zone borders — but you can choose the direction you travel in thanks to the hexagonic general structure.