I have been studying German in my spare time for 10 months, so I still have many things to learn. In a grammar book, I have seen a sentence from an excerpt:

How shoud I directly translate the middle part in English? I found 'spüren' is to 'feel, or sense (vt.)'. What's the subject word of the verb 'spüren' here? Is it ich or Luft?

ADD : it turns out as Björn Friedrich answered, the book has omitted a substantial part of a sentence there. That's why I asked about this strange sentence and I'm relieved what I leared and understood is correct. 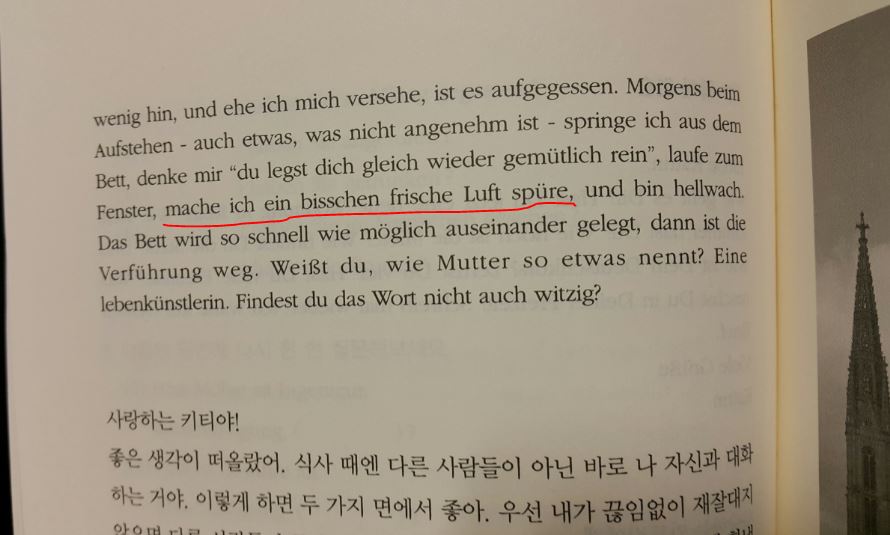 This is a serious error in your book, because a whole segment of the sentence is missing. The original sentence is from the Tagebuch der Anne Frank:

There are two verbs in that side clause: "machen" and "spüren". "Frische Luft machen" is literally "making fresh air" but figuratively means "opening the window and letting fresh air in". To me "spüren" would belong after the colon.

So grammatically correct would be: ". . ., laufe zum Fenster, mache ich ein bisschen frische Luft, spüre, und bin hellwach." In this case the structure is like this: Ich verb1, verb2, verb3 und verb4. So "ich" is doing all the actions and is therefore the only subject in the sentence.

As already pointed out, the above german sentence is not correct german. So either you mistyped something, or the book you are using is not one of the best. Even the sentence constructed by Higgs_Bosons is not quite correct german, as the verb "spüre" still needs an object - what are you feeling/sensing? (In regards to your question, the only thing making sense would be to sense the fresh air...).

But still, to "make" something in german is considered bad german in most cases - teachers like to point that out with the sentence "Sei kein Täter - sei kein Macher" - loosely translated to "be no maker, be no doer" with a pun on the the word "Täter" also meaning "offender" in german (and a "Macher" being a hands-on person), since to make and to do are (mainly) auxiliary verbs in german.

So the - in my eyes - correct sentence would have to be something like "..laufe (ich) zum Fenster, öffne es (das Fenster), spüre die frische Luft und bin hellwach."

Not the answer you're looking for? Browse other questions tagged verbs or ask your own question.