“Verwesern” title, what does it mean? [closed]

I recently needed to translate some old texts from King Frederick I of Prussia and his son Frederick William I.

I saw several times a word Verwesern between a list of honorifics, but translating this word brings me something like To Decay or To Rot.

Anyone can figure what it means in this context?

Or here in Von Policey 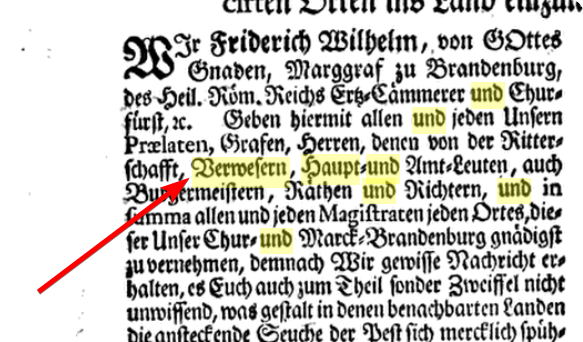 A Verweser is a substitute, someone who either

The latter is the meaning in your case. Note that the title or description is no longer used in contemporary German, except in Swiss German in the former sense for temporary jobs or for protestant priests. It can be used in bureaucratic lingo in the former sense, but it's probably not something the average person would actively use.

As you are asking for Verwesern, that’s simply dative plural.

This is an old word. As we can read in Wikipedia it describes a supervisor or custodian.