Stereotypes: could it be that this joke is not from German cultural background?

I recently heard this joke:

This is not from a newspaper or so, it was part of a conversation in a business context in a large German company, and all participants were home-grown Germans.

My problem is: I do not get it. I know about various stereotypes in German everyday culture about certain characteristics of certain nations, so Italians are said to be chaotic (but very communicative), French have excellent cuisine (but are believed to be unorganised), etc. However, in this joke some things seem awkward:

The question is: are there regions in Germany where German cuisine is said to be bad, and there are stereotypes regarding Finns that would fit the joke (and even make it funny)? Or could it be that this joke has been taken and directly translated from some other cultural-linguistic area, e.g. the Anglosaxon world or so? Or where (geographically) would those exact stereotypes be living?

(If someone feels like remarking that this is not a question related to rules, grammar and lexems of German: well... I would argue that stereotypes are as much part of a lingustic system as rules of grammar are.)

As some commenters were asking: no, the company where this took place has nothing to do with Finland in particular (beyond selling their products and services to Finland as to any other country in the world). Finland has not any particular role here. And it is a genuine German company, no Scandinavian roots, ownership, history, or whatever. Management is predominantly German, although as everywhere in companies of that size various foreign individuals may be hired, too.

This is another variation of a very old joke that is made up of similar stereotypes with variable nations.

The oldest internet reference I found was claimed to date back to 1970:

Another reference in books scanned by Google dates back to 1992 and English variants (possibly original source?) are from the mid 80ies of the Last Century. Of course there are plenty of variants from Swiss bankers to French cooks, and more.

The stereotype used depends very much on the political background and intention of the joke-teller. There is no such universal stereotype that would hold true everywhere and in any time. Nationaltities and professions are grossly exchangeable.

So the variant you had quoted in your question may have been told in a Finnish hotel for example, or at a Nokia meeting, or any other meeting, where the joke would work for specific local reasons.

The question is: are there regions in Germany where German cuisine is said to be bad?

Some may argue, all of the regions are known for their bad cuisine. In reality this is somewhat supported by the dominance of the simpler, basic food items that are seen as typical for a certain region. Two examples: 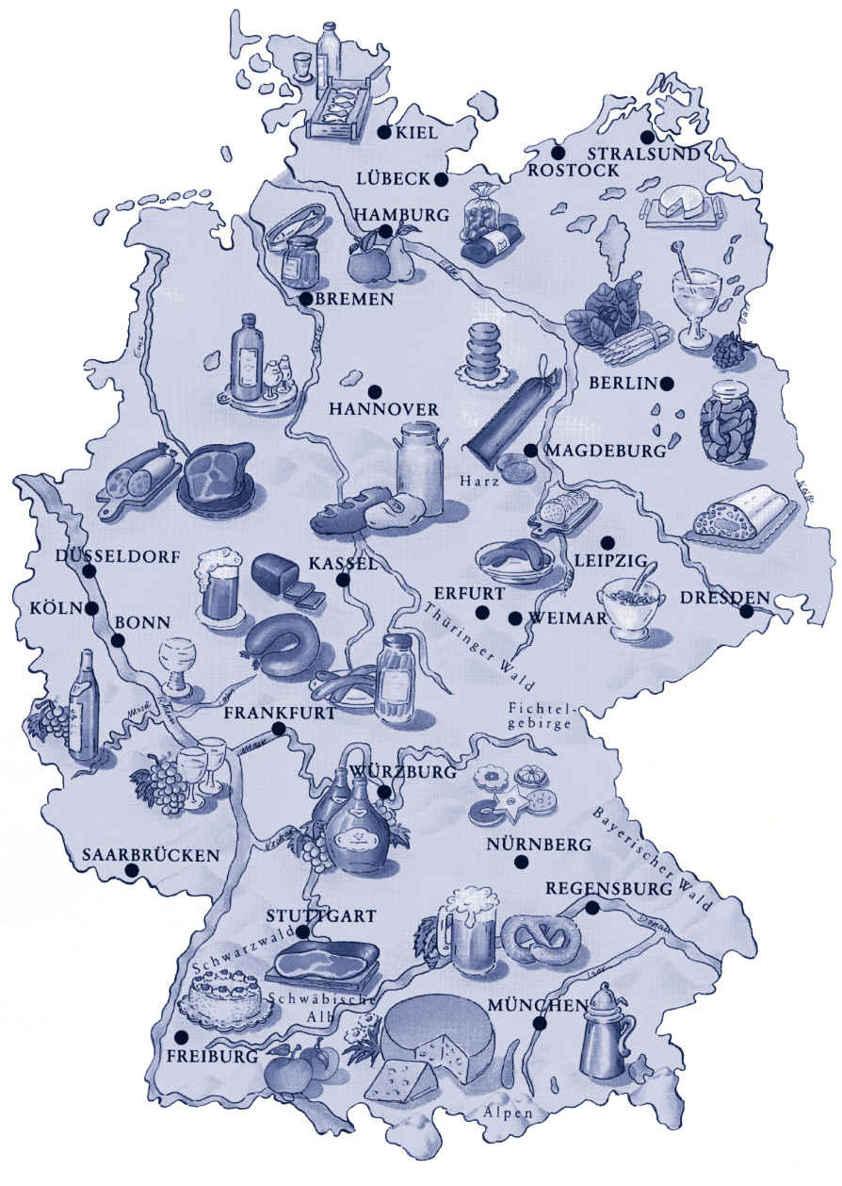 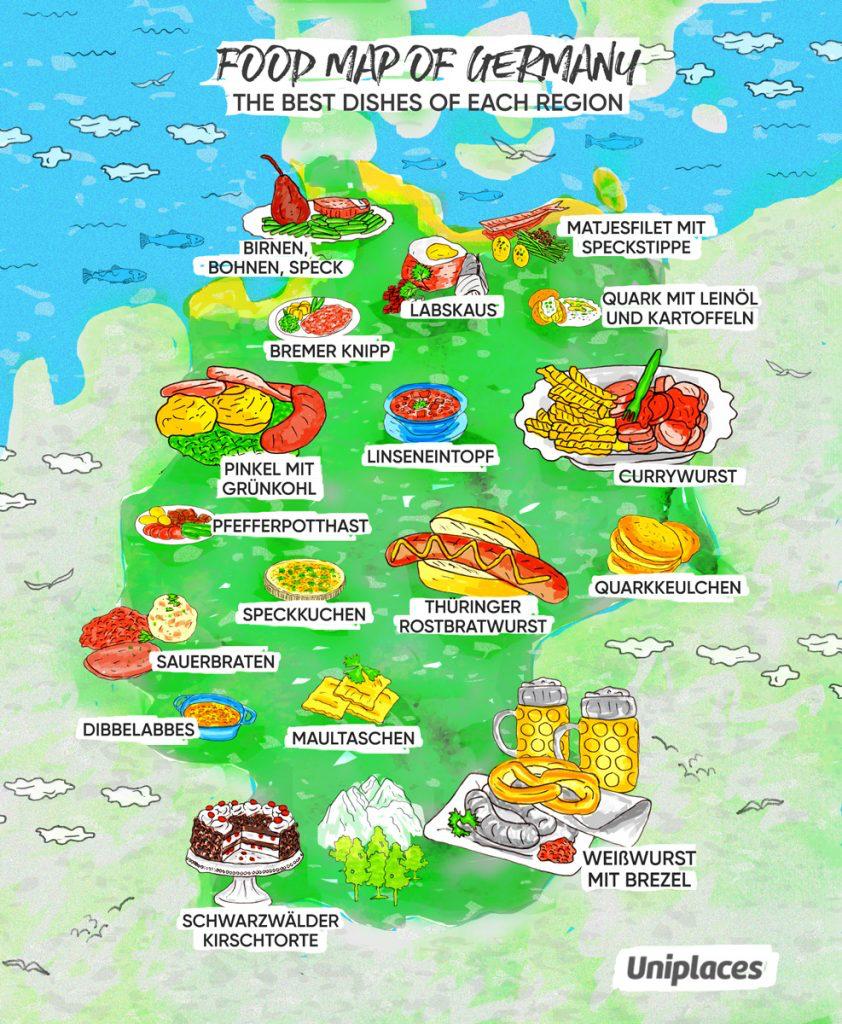 That would translate into a generalisation that German food is not very sophisticated, like illustrated here Top 10 Things to Eat while in Germany:

Germans are know for their traditional German cousine around the world. What many people don’t know is the fact that German cuisine is so much more than just sausage and meat.

But then this post lists Spätzle, Bratwurst, Currywurst, Bratkartoffeln, Sauerbraten, Maultaschen, Leberkäse, Schnitzel, Rouladen, and Gulasch. Indeed, much more than sausages and meat!

These stereotypes are not always based on good research, but apparently really widespread:

Given that France and Germany had fairly equal access to foodstuffs and spices, why did French cuisine reach such great heights and the general French populace eat so well, while German food is unremarkable?

To be fair, while the German cuisine might have a widespread bad reputation, the reality for sophistcated cooking in German gastronomy seems to look somehwat different than the stereotype, according to the Guide Michelin: 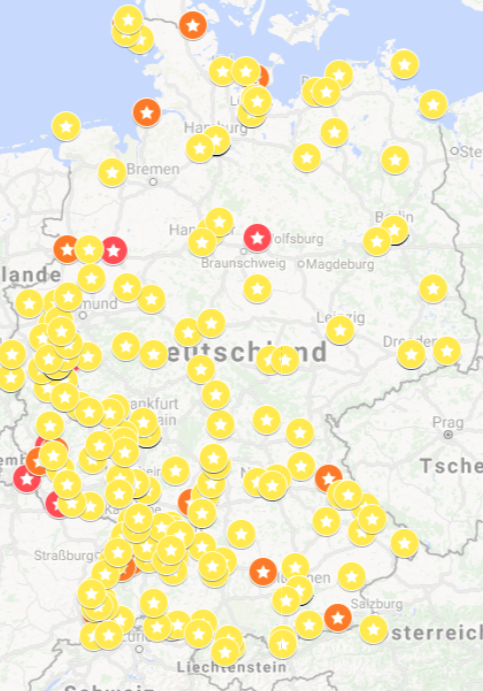 Further more, this map seems to indicate a pattern of regional variation. Germans have apparently some excellent cooks to the South-West, near the French border. For French tastes?

Given the role change for Finnish personnel as a receptionist:

"Das Klischee-Image eines Finnen ist das eines sturzbesoffenen Typen, der keine Lust hat, mit irgend jemandem ein Wort zu wechseln.
(Source: Focus (The stereotypical image of a Finn is that he is always very drunk and not in the mood to talk to anybody.)

Although from a German perspective an English cook might serve also very well as the stereotypical bad food preparer, Germans are known to be as wrongly placed in a kitchen if sophistication is expected. The same principle applied to a receptionist: You want a friendly and reliable person that has to talk to the guests. One of the least likely candidates to be good at this job is by cliché the Finn.

Apparently the joke originates from xeroxlore (now called faxlore), but is very widely shared in its basic construction among almost all Europeans:

In heaven, all the policeman are English, all the car mechanics are German, all the cooks are French, all the hotel keepers are Swiss, and all the lovers are Italian. In hell, all the policeman are German, all the car mechanics are French, all the cooks are English, all the hotel keepers are Italian, and all the lovers are Swiss.
In general, jokes that depend on national stereotypes are in bad taste, but we submit that the one above is an instructive exception. It does not choose a stigmatized group and heap further abuse on it; instead, it targets a number of the most economically powerful nations on the planet and attributes both the best and worst of traits to each of them. But for our purposes, what is most interesting about the joke is that its humor depends on the audience’s knowledge of a great deal about each of the nations; heaven and hell are distinguished by whether the assignment of occupations takes advantage of the nations’ envisioned best traits or exposes their worst ones. In other words, the joke aligns a collection of nations in a field of attributes.

And this seems to 'work' because:

The few target nations within Europe on which there is comparable agreement are the British, Italians, and Germans. […] Only the stereotypes of the British, Italians, and Germans are as widely held as those of these non-European nations.
(From James Shilts Boster & Kateryna Maltseva: "A Crystal Seen From Each of Its Vertices: European Views of European National Characters", Cross-Cultural Research, Vol 40, Issue 1, 2006.)

If this explanation is any good, the joke should be very unfunny by now.

Not the answer you're looking for? Browse other questions tagged jokes or ask your own question.

11
A joke from “The Magic Mountain”/“Der Zauberberg” translated into English?
2
What does »Guat« mean in this joke?
24
A joke in German that I don't understand. Is it a language difference or is it that I just don't get it?
9
Can someone explain why this German language joke is funny?