I was wondering if somebody could help me with properly expressing a an "incendiary" or "inflammatory" speech/comment in German.

Would anybody be nice enough the correct way to express things like this, and what the differences in the 3 above mentioned words are?

This is a complex topic.

Good German translation for the first sample sentence about the school principal:

Good translation for the second sample sentence about the head of state:

In both cases you could use hetzerisch. It depends on what you want to say.

hetzerisch: somebody tries to make others feel extremely negative about others, perhaps even act agressively against them; the author (he or she who uses the word hetzerisch to describe he utterances of a third person) finds this unethical.

aufrührerisch: quite similar; however, as opposed to hetzerisch, the author sees the person acting aufrührerisch more part of the action than simply telling others to act. A figure like President T would rather be hetzerisch speaking than aufrührerisch because usually he does not do anything concrete but speaking; e.g. he instigates others to use violence, but he himself does not personally beat somebody. Importantly, aufrührerisch is directed against some sort of an authority.

aufwieglerisch: similar to aufrührerisch, i.e. the person acting or speaking aufwieglerisch is seen as part of the movement; also, whereas aufrührerisch is clearly unethical, aufwieglerisch can be meant, sometimes, not that much negatively. There may be situations where one can believe it being a good thing to aufwiegeln others (e.g. citizens in a municipality to take action for some cause in public interest, against a lazy municipal administration); anyway there is an element of "we from below oppose against them up there".

I used skandalös in the president example although its meaning is a little bit different as it relates to (real or imagined) public outcry over morally wrong behaviour or action. But in a sentence like this, in the context of politics, and with the social setting as it is (US society, democratic order, a president acting in a strange and devisive way) you would rather not use aufrührerisch or aufwieglerisch. Eine Menge zu etwas aufrühren or Leute zu etwas aufwiegeln is typically an activity done by people from below, not by those on the very top of a hierarchy. You could, however, use hetzerisch, because jemanden zu etwas aufhetzen can be used for people from below or from above. Hitler, clearly at the top of a hierarchy, still could aufhetzen his followers, and so can President T. So I easily could have used hetzerisch in the second sample sentence; but I wanted to offer an alternative, so I chose skandalös.

The main difference of skandalös as compared to aufwieglerisch, hetzerisch and aufrührerisch is that the latter three all are used for actions where he who speaks (say, President T) clearly wants people to get excited (and perhaps violent), whereas skandalös is used for cases when he who speaks (say, President T) did not clearly intend people to get excited (and angry) but they anyway do. With skandalös it is expressed whether the author thinks that President T intended to cause public outcry or did not intend it; it simply happened. We saw this hilariously in July 2018 after an infamous press conference in Helsinki. The key figure (President T) caused public outcry, and we suppose that in this case he did not intent to, but we are not sure; we use skandalös to describe the effect of the speech, not the intention.

For your sentence about inflammatory comments it would therefore be important to know what you want to say: Do you want to say that these comments cause public outcry (= skandalös), or that they were meant to instigate hateful feelings and actions against the EU (= hetzerisch).

From the elaborate discussion above I derive the following suggestion of bipolar semantic parameters (or slide controls, if you like the image) to differentiate the terms.

For hetzerisch and aufrührerisch I would quantify the semantic values as follows: 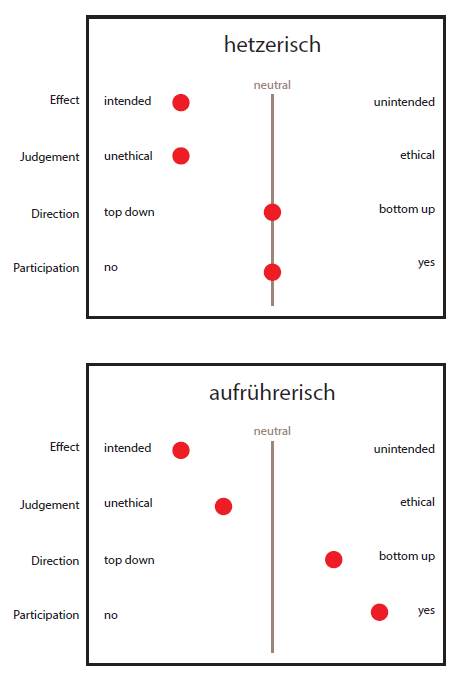 As was said before there is no universal translation to incendiary or inflammatory. It all depends on context.

Whenever diplomacy such as in example 2 is involved we will not use the direct translation for incendiary in German presumably because of its closeness to fascist rhetoric. We'd use much softer adjectives such as giftig, hitzig or use sticheln as a verb. So all of the follwing would be possible for a translation of the quote in the question:

In other contexts such as in example 1 from the question we prefer to use a verb to point to the incendiary nature but use a more precise adjective for what is wrong with the comment:

Last but not least if it was an incendiary speech there is a widely used composite in German mostly used in a fanatic religious or political context:

And some everyday words to have something to compare:

At a rough estimate the English terms will be found about 10 times more often than the corresponding German terms.

19,000 German hits for »der aufrührerische Kommentar« corresponds to 190,000 hits for the English term, which is way more than the most common phrase "inflammatory speech" with only 60,700 google hits.

Not the answer you're looking for? Browse other questions tagged meaning translation english-to-german german-to-english or ask your own question.