I was reading a text, and I found those two sentences:

I don't understand why the preposition changed from "auf" to "in".

Though you could read auf as a place, it's not too likely the roof of the hut is meant. Instead, it's the hut as an institution.

The reason is because die Hütte in this case isn't a booth but a lodge in the moutainside. There are usually only footpathes which go there, and a ropeway and/or helicopter landing place. It isn't just indoors, but also the Biergarten which commonly accompanies a hut. Some alpine lodges allow you to eat your own provisions at their outdoors tables, some not. It all depends on their general pricing policies.

That's clearly about indoors only. Auf doesn't match here. You should of course wear your shoes in the rocky Biergarten. Don't have to call the helicopter for you then.

There are some idiosyncracies possible with these phrases.

The most fitting and most often chosen word relating to the usage of a preposition for a situation where someone really is just in a hut, the edifice, is German in der Hütte. So it is more the auf that is perhaps slightly unusual.

The preposition auf refers to the hut as an institution. As such, it includes the outside parts of the hut as well, such as the terrace where foods may be served. The inn keepers only make money from the foods and beverages they sell (the accomodation expenses go to the owners of the huts, usually the alpine clubs) and are therefore unhappy when hikers bring their own foods. 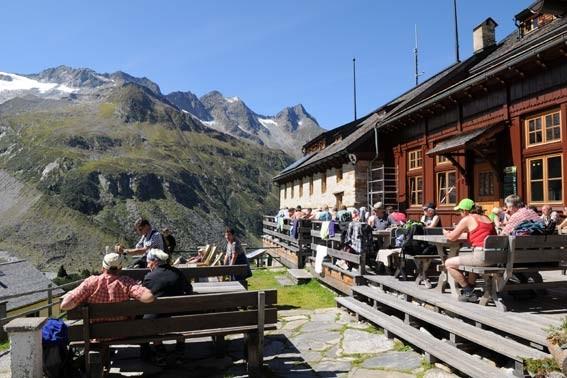 The preposition in on the other hand refers to the hut as a building and means only its inside. You can wear your shoes on the terrace.

auf can be used with other buildings/institutions:

auf dem Dorf wohnen not in a city; can also mean a lonely house in the countryside outside of a village

More examples can be found in dictionaries.

German prepositions are as inconsistent as Englisch ones:

Auf der Hütte solltest du deinen Proviant besser im Rucksack lassen.
At the hut you should leave your provisions better in your backpack.

Du solltest deine Schuhe nicht in der Hütte tragen.
You should not wear your shoes in the hut.

It changes from auf/at to in/in for no reason. Just because it is possible and to have some variation.

Not the answer you're looking for? Browse other questions tagged prepositions or ask your own question.