How to differentiate between sie (they) and sie (she)?

I am starting to learn German and I'm trying out Duolingo, I've faced this problem several times.

If I understand correctly "sie" means both she and they. So if there is no context, can I distinguish between the both? 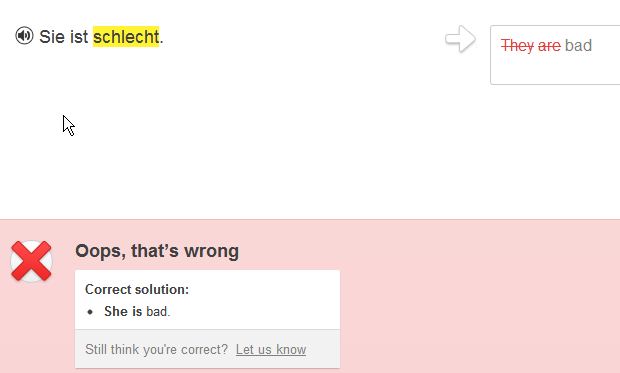 Could I have known which one does it refer to?

How do you do it normally, by context and only context? I know that they are always pronounced the same.

In each case you conjugate the verb differently. Here the verb is sein meaning to be.

Although to add to the confusion here, there is yet another pronoun Sie meaning you in the plural or polite form. In the middle of a sentence you can see that it is capitalized but in spoken German or in the above examples there is ambiguity. "Sie sind schlecht." could also mean "You are bad." This can only be distinguished by context.

To keep the explanation simple:

If "sie" comes with a verb in singular, it means she.

If "sie" comes with a verb in plural, it means they.

There's one more option apart from those explained in the fellow answers, namely a change in gender in translation:

if the object in question is some kind of fruit, for example. In English, you speak of orange and lemon as neuter, whereas in German you use feminine gender for both Apfelsine and Zitrone.

You can already figure out exactly the same distinction in English if it is presented to you as a puzzle. Even though it's not something you usually have to do, because it requires a context in which you don't know what it is that a name refers to. You are just confused when you have to do it in German because you haven't internalised German verb conjugation yet.

Here is the puzzle:

A British pop fan made a confession about his bad taste. Put his sentences back into the correct order. Start with the two that are about a woman.

Sie sind schlecht = "they are bad" because "sind" means "are", referring to a plural "they".

this does get more confusing though in the first example because "sie" with a capital "S" can also mean "you" in a more formal way (e.g. talking to a boss, coworker, or someone you just met) (in German this is called "sietzen", whereas when you're referring to a person in a more casual way, e.g. a friend or family member, you use "du". To refer to someone using "du" is called "dutzen" in German). If "sie/Sie" used at the beginning of a sentence like the first example, you just have to use context to figure out whether the author is referring to "sie" as in "she" or "Sie" as in "you". In the middle of a sentence you can tell by whether or not "sie/Sie" is capitalized.

Not the answer you're looking for? Browse other questions tagged difference meaning-in-context or ask your own question.