'Fladry' is a comparatively recent adoption in English from Polish, with a putative origin in German. The Double-Tongued Dictionary gives this definition and partial etymology:

fladry n.pl. a string of flags used to contain or exclude wild animals. ... Etymological Note: According to Polish Scientific Publishers (Wydawnictwo Naukowe PWN, SA), fladry is the plural of flader, which comes from German. It is not specified which German word, but it’s probably related to flattern ‘to flutter.’ It is probably not related to the Polish flÄ…dry, the plural of flÄ…dra, which according to the Oxford PWN Polish English Dictionary (2002, Oxford University Press) means “1. flounder, flatfish; 2. slattern, slut.”

I have found 'fladry' in English in the sense of "a string of flags etc." as early as 1993, in a technical paper titled "Status and Management of the Wolf in Poland" (Biological Conservation; see, for example, the abstract).

Alongside the current efforts to manage wolf packs after their reintroduction to areas of the US where they may prey on domestic animals, 'fladry' has been adopted into the commonplace English lexicon, although it does not yet appear in OED or other well-established print and online dictionaries.

I am hoping for an authoritative answer based on at least one quotable source.

My guess is that the German etymon is, in fact, flader, a German word meaning "streak, vein". In the form 'flaser', which derives from a dialect version of German flader, the word finds current technical use in English to denote a structural characteristic of sedimentary rock:

Although the rock structure and a line of flags in fencing do not, at first blush, seem to resemble each other much, part of a diagram in a 1968 paper, "Classification and Origin of Flaser and Lenticular Bedding" (Sedimentology, Volume 11 (1‐2) – Oct 1, 1968), which attempts to more precisely define and subdivide sedimentary bedding types, appears to make a more graphic connection: 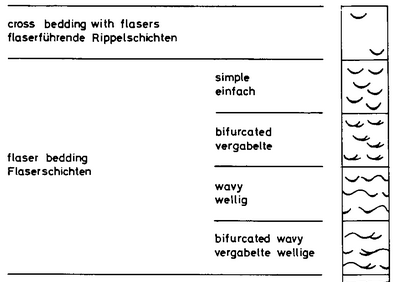 Further research turned up flader in a 1912 English-Polish dictionary, where it is defined as "streak in wood". Because Polish Scientific Pub. state that fladry is the plural of flader "which comes from German", and given that flader is defined in A German-English dictionary for chemists as "curl, speckle, streak", my guess seems somewhat supported by that evidence.

Beside the verb flattern (cognate to English flutter), the entry also suggests Flieder as a possible source, which as a hunting term apparently refers to Lappen und Schrecktücher (Kehrein, Wörterbuch der Weidmannsprache). Not only would this fit the meaning perfectly, it also has the advantage of being a noun, whereas flattern is a verb.

From the illustration of a fladry line in Wikipedia it is clear what this item would be called in German: 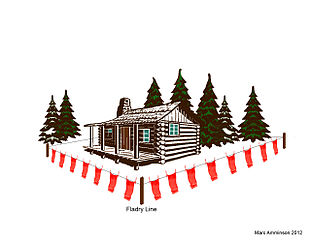 Therefore the etymology of fladry from the German flattern (to flag, to flap) appears to be quite plausible.

Up to the 16th Century it was written fladern or fladdern which is even closer to the English fladry. Other than an entry in the Polish Wikipedia section I could not find any further reference for a Polish origin.

The Flaser used as a technical term in geology is derived from another root, such as is the Fladen, the latter being close to Flunder (flounder).

Side note: a nominalized from of the verb flattern did exist (Flatterei) but it apparently was used figuratively only with a remote reference to "flapping" decorations.

6
What is a suboptimal question?
2
Etymology of ending "-keit" in relation to ending "-heit"
8
Comprehensive resource for Yiddish etymology?
12
Is there an etymological connection between the words “gut” (“good”) and “Gott” (“god”)?
3
"sich behaben"?
2
Why teilnehmen AN?
8
Why do Germans spell and pronounce "rocket" with an "a" (Rakete)?
16
Germans call glucose grape sugar? Origins for this if so?
1
German "Na Na", English "Now Now", and Russian "Nu Nu"