How to translate "Trinkets, odds and ends"

Me again, still writing my book and still naming all the chapters in Deutsch.

I'm trying to translate phrase "trinkets, odds and ends", but I'm really confused, as Google suggests "Schmuckstücke, Kleinigkeiten" for whole phrase, but for "odds and ends" alone it suggests "Krimskrams", and also "allerlei Dinge", "Quodlibet", "Jambalaya" if I try translating from Russian (that's my native language).

I've tried looking up translation of all of the words back to English, and none is translated as "odds and ends".

Context: the phrase itself is a quotation from video-game Skyrim, where traders of general stuff will greet player saying "Trinkets, odds and ends. That sort of things". Ideally, I'd very much like chapter name to match what those traders actually say in German version, given that they do say something similar.

So, what's the difference between these (and probably other) options for "odds and ends"? What's the right one?

Also, if someone knows what traders of general stuff say in German version of Skyrim, that would be really great.

P.S.: Please, let's not discuss whether there should be chapters, should they be named, what are other chapters names, etc. There is writers.se for that, and I guess I can figure out how to avoid repetition without posting list of all chapters

UPD For those who didn't play the game, or think that the phrase in game is odd: Please add some more realistic versions and explanation of difference between your options.

In the german version the merchants say 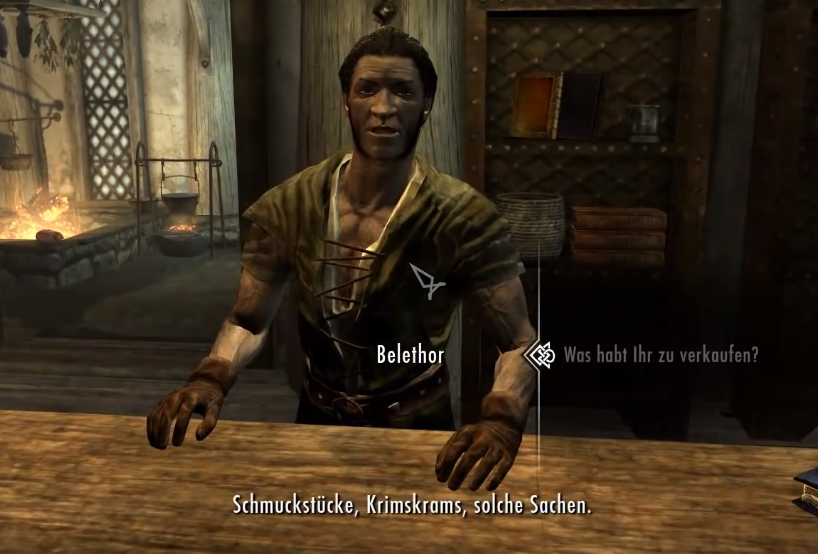 which is similar to @PiedPiper 's answer.

In addition I would like to mention the north-german

as used in another game

"Schmuckstücke, Krimskrams, solche Sachen" is the answer to the players question:

It's like a list of categories, not a complete sentence. One may say no one uses the word "Schmuckstück", but well ... trinket translates to Schmuckstück. Personally i would prefer

but that's my personal opinion. The answer given by the merchant is ok as well (from my point of view).

"But, no one talks like that!" Well, a few days ago i was talking to one of my friends and asked her what she did at the gym and she said: "Gewichte, Beinpresse, sowas halt." It was very elliptic, but a valid answer. Just as the merchants.

There is a German idiom containing two synonyms for goods of lower value "Tand und Trödel":

The second quote will also give you a name for a market where these goods are usually sold, it is called Flohmarkt. If it is a shop you may use Trödelhandlung or Trödlerladen the shop owner would be a Trödelhändler (or when ancient language was desired Trödler).

You may also combine synonyms like Trödel, Plunder, Kitsch, Firlefanz, or more to put emphasis on the variety. A sufficently ancient term for small ornaments or jewelry of lower value you may be Zierrat. So a line transporting the essence of "trinkets, odds and ends" could e.g. be:

The translation offered by the German locale of Skyrim is unidiomatic, nobody would talk like that.

Now as a picture has been published (see above) where we see a clichee mediaevel macho figure standing behind a counter, we have a bit more insight into the context. This helps us finding adequate translations.

The picture reveals that this is not at all a greeting formula (as initially presented). Rather a customer asks the trader what he has to sell:

The trader then answers something which in the English version seems to be "trinkets, odds and ends". Now, I suppose a native speaker of English, in the position of a shop holder, whould not say this either. Still, the wording can give us a hint what the goods are he sells (strangely enough the picture doesn't show it). In contemporary German, a possible thing so say would be

depending on what he actually sells, of course.

Now, if you want to use a more old-style expression (to avoid contemporarian language) you may say:

This would then suppose that the "odds and ends" he offers are actual "odds and ends", i.e. garment adorning materials, i.e. passements. Which is a bit out of fashion today, but was an important branch of textile economy in the olden days.

An alternative, likewise in the area of apparel accessoires, would be

Given that in the video game traders introduce themselves with

"Trinkets, odds and ends. That sort of things"

which is slightly self-disparaging, I would suggest that

would probably come closest to the spirit of the original

Update: The translation used in the German version of the game is "Schmuckstücke, Krimskrams, solche Sachen".

I'm not sure if you want to know which phrase the producers of the game skyrim used in the German version of the game, or if you want to know which phrase German native speakers would use in daily life. Because you never will hear the phrase from the game ("Schmuckstücke, Krimskrams, solche Sachen") in real life, spoken by a real native speaker in a normal conversation.

German native speakers don't use three words for this phrase (and »Schmuckstücke« is non of them!). They say:

Not the answer you're looking for? Browse other questions tagged translation english-to-german word-choice idiom or ask your own question.

4
What's the difference between "manch" and "viel"?
19
Meaning of "die Kurve kriegen"
0
What is the difference between "vorkochen" "kochen" and "nachkochen"?
23
Difference between "Ich möchte" and "Ich hätte gern(e)" and "Ich würde gern(e)"
2
How do I say "It's all about the marketing"?
1
Translating "A letter for the public to read" and German infinitive verb grammar
2
How to translate asset (in a track and trace software)
12
How to ask for a bank account "upgrade"?
7
What colloquialisms can be used to refer to a friend?