Is there some relative to Dutch word “kijken” in German?

Inspired by this question, I wonder if there is also some German relative (dialect or general) of Dutch word "kijken" for to watch or look at something.

I think for example I saw or heard somewhere a comment about "kieken", is this used?

An example where kijken is used

which google translates to

The German for kijken is

Both is standard German, and you can find both forms registered in Der Duden (most authoritative reference dictionary for German).

Kieken, in contrast, is a Northern dialectal form of kucken, and of course it is so to say the bridge to kijken.

There are many common phrases with kucken, e.g.

meaning something like: "*Oh, that's indeed surprising!" In Swabian dialect (in the South-West) this would be: Jo do guck naa!.

"That's surprising for you, isn't it?"

meaning something like: "Okay, I don't know yet, but we will see what brings the future; or simply: "Let's see."

a stereotypical bully phrase of oriental street gang members who want to intimidate somebody who dared to look at them. Pronunciation is then typically more like Wuss kuckstu!

Also a person can

i.e. look stupid after taken by unpleasant surprise by something.

There is a related question on StackExchange Is there any differences between “Gucken” and “Schauen”?.

One of the answers contains this plot from Atlas der Alltagssprache, which shows how people formulate a call like "Look (there)!" 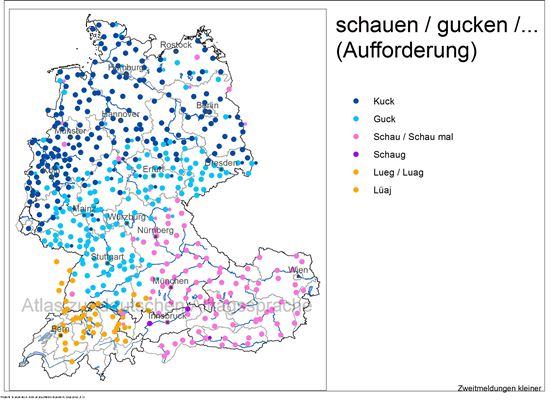 In the Berlin dialect there is actually "kieken" [ki​ː​​kən] as form of high german "gucken" and I guess that is a heritage of its low german roots. It has the tendency to swallow its surrounding morphemes, e.g. "Da kiekste, wa?" ("Da guckst Du, nicht wahr?") or "Kiekstn so?" ("Was guckst Du so?").

You ask whether there is a German "relative" (i.e., cognate) of the Dutch word. Yes, it is the North German "kieken". According to the experts on etymology, "kieken" is not cognate with "gucken". Their similarity is coincidental.

Not the answer you're looking for? Browse other questions tagged dialects vocabulary loanwords or ask your own question.

10
Is there any differences between “gucken” and “schauen”?

9
Is “Erkennungsausweis” an actual word in German?
9
Is there such a word as “Suppenkummer”?
7
Could you spell Dutch according to the German system?
14
Is Chutzpadik a common German word?
15
Do Germans understand Pennsylvania Dutch (Amish German)?
7
Are there any separable German loan verbs (from English)?
3
Can raus sound like räusch in some German dialects?
6
Is »Alterssuffkis« a correct German word or a misspelled one?
6
What's the meaning of the German word »ran«?