Here is a Hessian rhyme, probably about drinking:

I've had a stab at translating it:

Hoch [mit dem] something (or possibly erhöhen wir den something?)

something to do with your neighbour, some nonsense syllables?

Can anyone shed any more light on what göddertrobbe in particular is?

Schobbe is Hessian for Schoppen which means pint. Schobbe is also a synonym for the Äppelwoi, the Hessian apple wine.

Göddertrobbe is Hessian dialect and would be called Göttertropfen in standard German. (I am not familiar with Hessian, but I assume, it is actually Gödderdrobbe - with the t softened to d as well). That translates literally as god's drop, or drop of the gods into English. Tropfen is a very common metaphor for a precious drink. The composite Göttertropfen either means drink fit for gods or drink made by gods, or, more general, a drink which is somehow related to gods, vulgo divine.

stumbe is Hessian and means to poke.

gewunge is gewunken in standard German, i.e. the participle of winken, English: to wave. kurz gewunge is a form to impress an imperative here, so it translates to quickly wave!

Humbe pumbe surely is Humpen pumpen in standard German, but the meaning is not very clear to me. pumpen means to pump. I assume it is a demand to empty the tankards. Then the sequence of imperatives would demand a sequence of actions: Lift your tankard, poke your neighbour, wave quickly and empty the tankard.

jonathan already explained the words, because of that I won't explain them again. Also I'm not sure if these are two separate rhymes combined together.

Well, at least the second one is quite common. There is also a Hessian carnival society called "Sackschdoahogger" and it's like their official drinking motto. This is how they explain it:

is their official toast when drinking alcohol.

And this is what to do (link)

Get a glas full of alcohol

wave at everybody in the room (korz gewunke)

drink from your glas (Humbe bumbe). Empty it, if possible.

And if you still don't know what to do: Here is a video

Of course a Humbe/Humpen is more like a tankard than a glass but well ... we live in modern times.

It is a Hessian toast. jonathan.scholbach has translated it in his answer. "Göttertropfen" refers to Hessian apple cider whose sophisticated taste is revealed not to many foreigners ;-)

Here is an extended version of the second line:

For another extended variant see https://www.stupidedia.org/stupi/Trinkspruch .

And here is a photo from December 24, 2007. It shows an advertisement of a cider-press house in a subway station in Frankfurt. 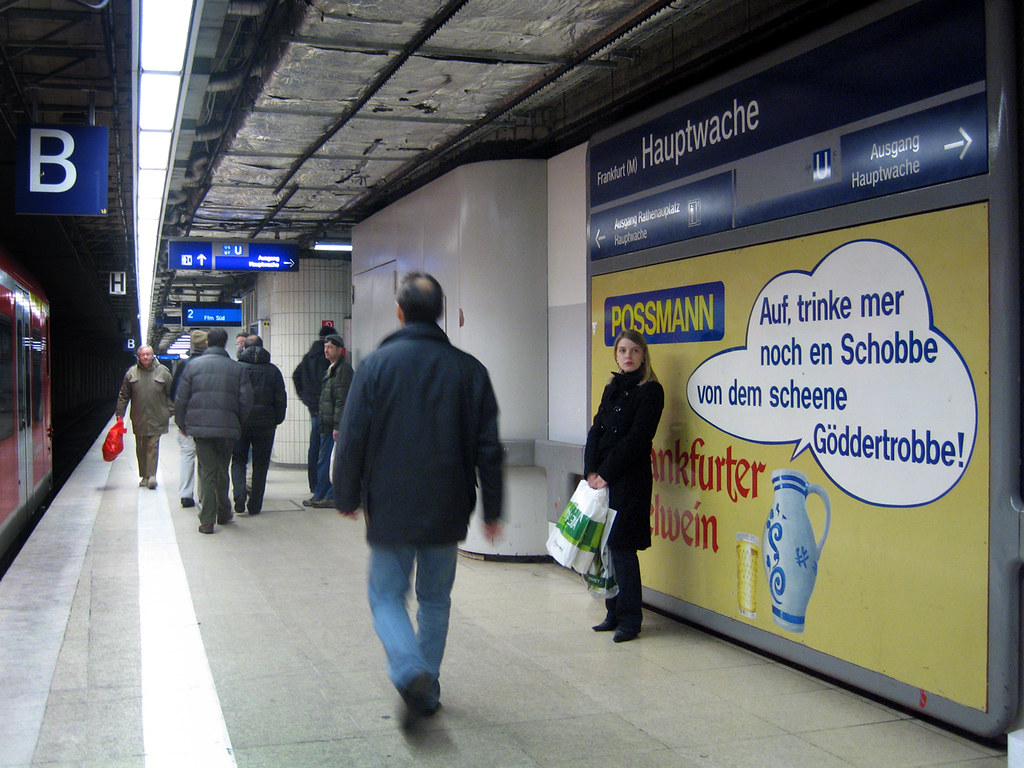 Not the answer you're looking for? Browse other questions tagged meaning dialects or ask your own question.

4
What is "Hochdeutsch"? Which dialect should I learn?
5
What does "spökerisch" mean?
3
What does “Foama hoam!” mean?
3
»Naa, gieh mer fott mit dem Saupanz un seim Gekaschper!« What is that?
0
What does "Ich han zwei Hölzigi dihei" mean?
2
What is the meaning expression "Haare auf den Zähnen"?
4
What TV shows are available in Austrian dialects?
6
What are some words only used in Hessen?
9
What could the old German (or maybe Bayrish?) word gestu:ep mean?