Which fighter has the right stance?

Here is the text we are transcribing:

Here is the picture: 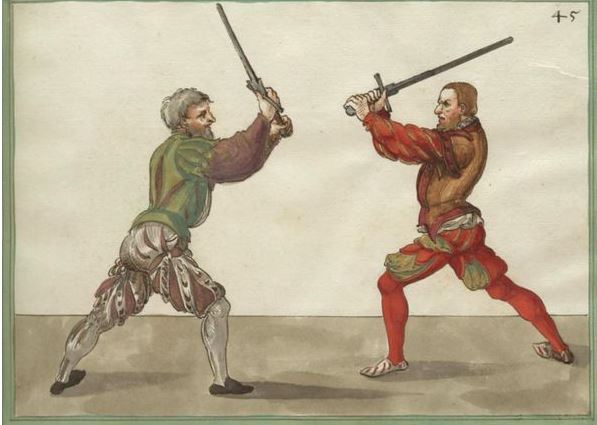 Which fighter adapts this guard correctly?

One important detail: prechfenster = Brechfenster – breaking window (where you can break in) / Stretched analogy being 'speaking window'. But it's really more like the 'strike zone'; perhaps better compared with the concept in baseball.

The break-window is described in Mair and Meyer as being a guard quite similar to Tag and used when "under" the sword of the opponent. From the depiction in Mair, we se that the guard protects above the head in a similar way to Kron Meyer includes several techniques from Brechfenster, typically contending with attacks that befall us when we stand in this guard, including attacks to the hands/fingers, and to the exposed openings and arms.
The counter-techniques are typically based on use of the Zwerch from the guard as a kind of Absetzen movement. The figure on the left below stands in Mair's "Break Window":

It happens like this in the Prechfennster (Speaking Window)[sic!]: stand with your right foot forward and hold your hilt in front of your head such that your thumbs are underneath, the point is high on your right side, and you look out at the opponent between your arms (as in left side of illustration). Drop the sword down on your right side as you step in with your left foot and strike him powerfully to the head.

If he strikes high towards you like this and you likewise lie in the Prechfennster and stand with the left foot forward, then displace the strike with your long edge with crossed arms as you follow outward with your right foot. Then drop the short edge down and strike on the left side of his head.

As the one to the left has his right foot in front, he is the one you seem to be looking for, as already noted.

Not the answer you're looking for? Browse other questions tagged history or ask your own question.

34
Which letters does the German alphabet consist of?
14
Do the noun 'Reich' and the adjective 'reich' have a common origin?
45
Does the German language have a Shakespeare?
16
Is the second verse of the German national anthem offensive? Why is it not used?
11
Which colour is "rosinfarben"?
5
Which word did people use before "interessant" got borrowed from French?
7
Why is the h in OHG "riohhan" geminated?
1
Did the gender of "der Ozean" change?