(„Engel“ by Rammstein, according to various people anyway)

Does anyone know why, in this line of the chorus, this song uses Gotte instead of Gott? I know it is a possible dative form. Is it antiquated? Is it expressing something particular here that Gott (in nominative or accusative?) would not, is it trying to imitate some biblical quotation, or is it meaningless? More than knowing what it means (clear in the context of the song), I want to understand it structurally (I realise it can take liberties as a song).

Link to the official "Rammstein - Engel" music video. Chorus in question starts at the 1 minute mark.

Does anyone know why, in this line of the chorus, this song uses Gotte instead of Gott?

Sure ... the song doesn't use Gotte, just Gott. Sorry, you were mistaken. Take a look at the official lyrics from the "Sehnsucht"-booklet. I made the picture by myself. It's blurry, but you will see no Gotte ;) 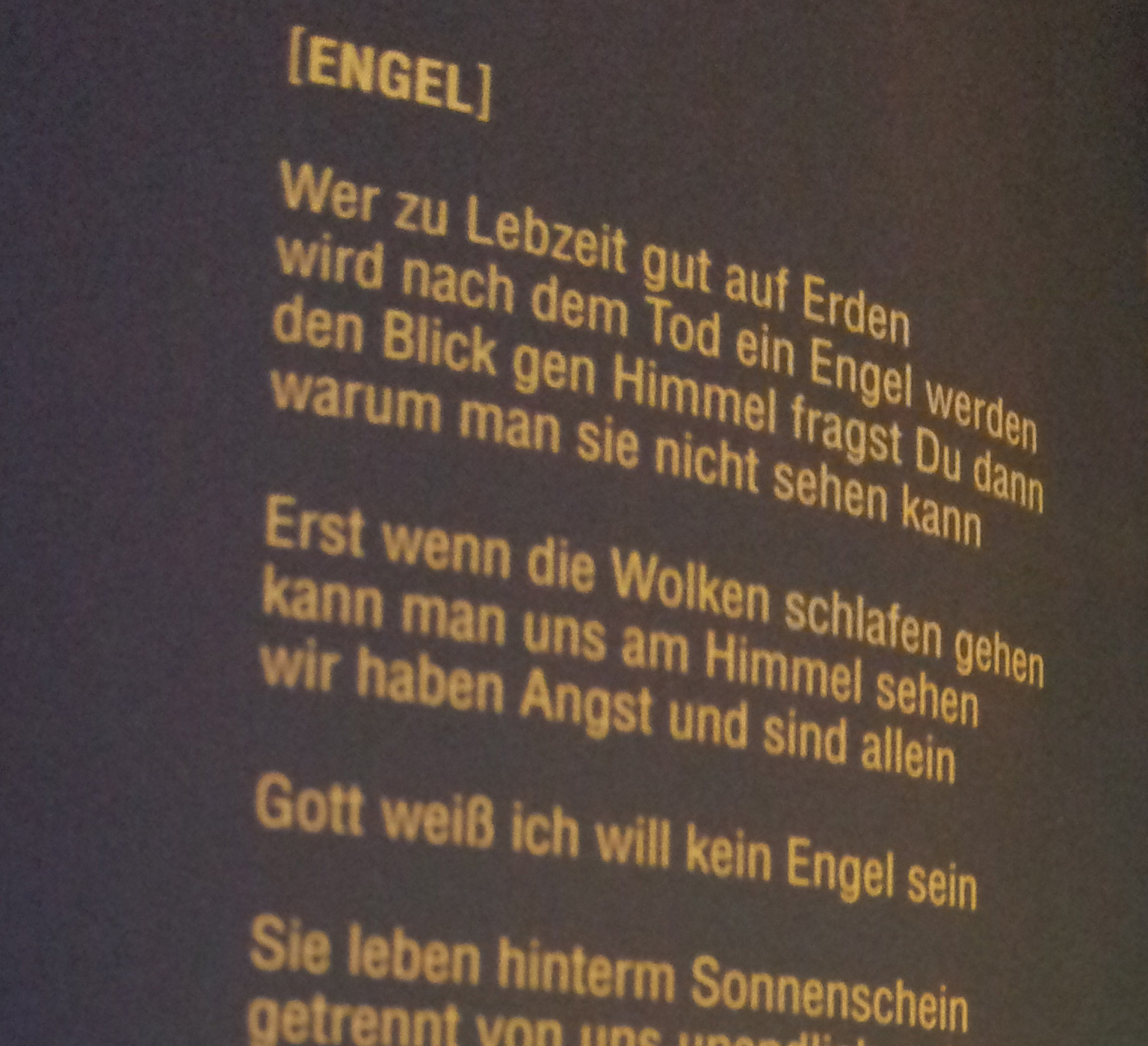 (I cropped the image, but believe me: all three "Gott"-lines are the same.)

It's nothing more than Lindeman's pronounciation and the typical teutonic Rammstein-sound. He just uses a typical hard t-sound at the end and stresses the word Gott, which creates this illusion.

Maybe you can hear it in this version.

Here are some other "Gott"-examples from native speakers.

To be honest: when the song came out in 1997 I was wondering myself.

BTW: Here is a (terrible) cover from Germanys The Masked Singer episode which aired this week.

In German, the fortis plosives are always aspirated, which means, that we always add a short breath sound after the consonant. So, [p], [t] and [k] in fact are [pʰ], [tʰ] and [kʰ] in German pronunciation. This is also is the reason, why before 1876/1901 many German words was written with »th« where you find just [t] today:

(Just to make it clear: In German digram "th" never was pronounced like in English. The sounds [θ] and [ð] never existed in German language. "Th" was written just to make clear, that the letter T is aspirated).

If you want to speak an extra hart T, you will find, that it is hard to make the [t]-sound louder without turning it into something that sounds like spitting. Instead you can make the aspiration (i.e. the short breathing sound) stronger. But it is a quiet sound, so the best thing is to make it longer and to mix it with a schwa-sound. But then it sounds like an extra "a"- or "e"-vowel after the T. And this is what you did hear in the song. It is just an extra aspirated T.

Not the answer you're looking for? Browse other questions tagged dative lyrics or ask your own question.