Why does "auf der Strecke bleiben" mean "to fall by the wayside"?

My first idea has been that the expression is related to the retreat of Napoleon's Grande Armée from Russia (or similar events), when many soldiers died of physical exhaustion, wounds, cold or whatever reason on the side of the road. It seems that this explanation isn't correct, though.

The "Strecke" is a place to which hunters bring the animals which they have shot.

P.S.: I hadn't read all answers before I wrote my own. @ChristianGeiselmann had already given a similar explanation. Jagdstrecke or short Strecke can also be used to designate the total number of animals shot during a hunt.

P.P.S.: If you want to see a "Strecke", you can use the Google image search for "Strecke Jagd". Most images are not released under a licence, which would allow to use them here. The photo below shows the "Strecke" of a driven hunt on hares. As seeing such a number of animal cadavres may provoke a strong negative reaction, I use spoiler tags. 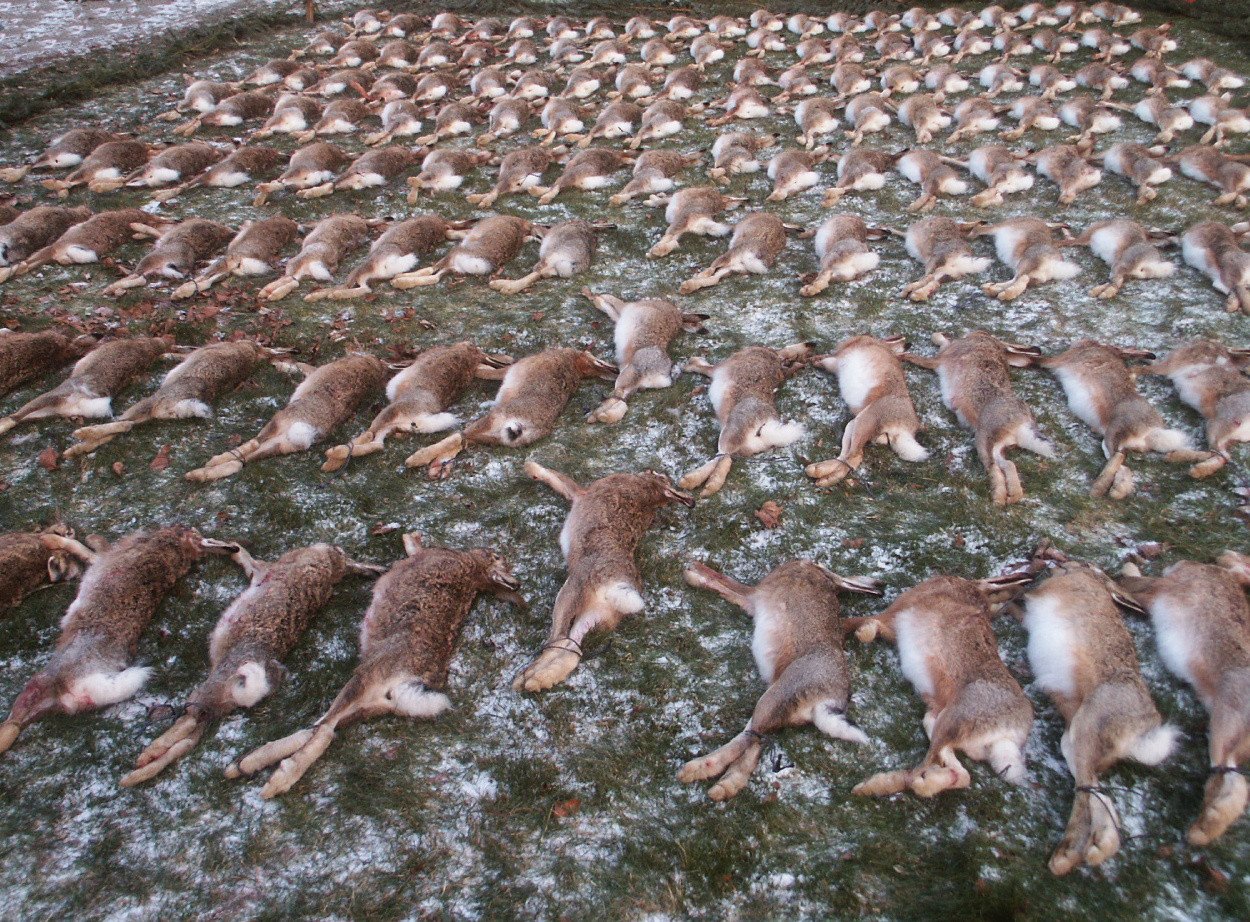 While "fall by the wayside" comes from biblical allusion, the German expression seems to be more of a metaphor. You failed something like somebody who stays on the track will never cross the finishing line.

Other than other people who answered here, I suppose that Auf der Strecke bleiben is not at all related to Strecke as track or route. Rather I suppose the phrase refers to an expression common with hunters. For them, by tradition since mediaeval times, Strecke is the quantity of animals caught and killed during the hunt, and displayed at the end of the event in a neatly arranged row somewhere on a meadow. Imagine hunters playing some music on horns in addition.

One could debate, perhaps, if Strecke first meant the entirety of killed animals, or the place to display them. I have no opinion here. In any way, today both meanings are in use metonymically.

Note that killing someobody is also

Admittedly Duden Herkunftswörterbuch (one of the more recent editions) claims that Auf der Strecke bleiben "probably" roots in sports, whereas zur Strecke bringen was related to hunting. But Duden does not give any evidence for this whatsoever, and I would dare doubting their judgement in this case. Rather than the relatively modern phenomenon of sports, a military context could be theoretically supposed, as Volker Landgraf did in his separate answer, with military men being left "on the track" during quick advance or retreat of larger military bodies. However, if that was the origin of the phrase, I would suuppose there were other words too like auf dem Marsch bleiben, which however does not exist. Contrary to that the existence of a phrase zur Strecke bringen which clearly is related to hunting, is a strong hint that also auf der Strecke bleiben is probably a hunting term.

My prefered literal translation would be "left/remain on the way/track" - never arrived or finished. (I would not translated it into "stay on track" - this would rather translate to "in der Spur bleiben".)

Imagine an army making a forced march, maybe being pursued by enemy troops. Some soldiers will run out of energy to march on and collapse so they stay on the track instead of reaching the destination.

As idmean has answered, it literally means

However, it is not so much about failing but rather about not being completed, being ignored/forgotten or being put at disadvantage, see here: German examples

I delibaretely chose the wayside translation, although you probably wouldn't say it this way in English. If needed, I can provide proper translations.

13
What does "auf Habacht" mean?
8
Does "aufrollen" have a colloquial meaning?
20
Does German have the "must we not" formation?
12
Expression "running out" in German
1
Is the expression "etwas ist vom Laster gefallen" used almost always figuratively?
10
What does »an der Hacke« mean?
8
What does 'Nummer' refer to in "Auf Nummer sicher gehen"?
3
What does the phrase "[jemanden] auf den baum bringen" mean and where does it come from?
2
Meaning of "stehend inne"
6
What does "Was erlauben Sie sich?" mean?