I need some Ge-En bilingual parallel text story books for beginners with illustration and in-situ translation of new or difficult words. For example I attached a picture of a Russian-German book. 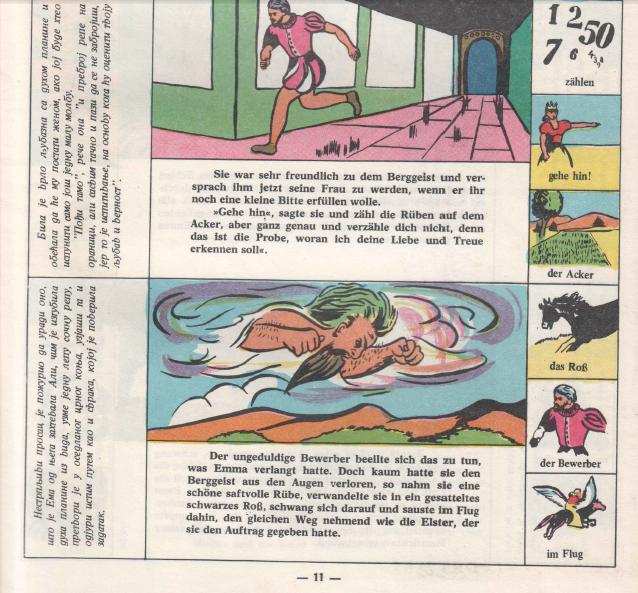 If you're in Germany, you could go to a bookstore and look/ask for Reclam pocketbooks. They're relatively cheap and frequently used in German schools to learn foreign languages. Larger bookstores or those close to universities may have a wider selection. (Of course, you can also order online.)

The "red series" consists of unilingual foreign-language texts with uncommon words explained in footnotes. Unless Reclam added a few titles for learners of German, they are of little use to you.

However, there is an "orange line" of bilingual texts. These are not some stupid, infantile texts, but mostly literature classics. Still, they are intended for Germans who learn another language: You'll find Shakespeare's Midsummer Night's Dream, Hobbes' Leviathan, Réné Descartes' Discours sur la Méthode, Ovid's Ars amatoria - but no texts from German authors.

If you prefer Russian/German, there are classic texts from Pushkin, Tchechov or Lermontov, crime stories by Daniil Charms, fairy tales,... Surprisingly, there is even Max and Moritz by Wilhelm Busch. (The style is clearly outdated, but as the text was written for children the vocabulary should be relatively easy and the illustrations will certainly help a lot.)

Right now there is only one series I can think of. A lot of it's stories are for children around the age of 4-5. They are like children picture books. But there are also some for "older" children.

Books like this one contain in-situ translation, but there are also books like these, which seem to be more interesting (at least storywise ^^). Take a look at the reading samples, but don't be confused: most books are pusblished in more than one language.

This is not a direct answer to your question because I don't think what you are looking for is what will help you most.

The example you provided uses somewhat dated language, which is all well and good but probably not the best thing to focus on as a beginner. In general I'd expect to find that kind of book either as translations of difficult texts or aimed at school children. The first won't really help you and the second might not be very interesting.

Additionally, you don't really need translations provided with the text if you keep a smartphone nearby. Use e.g. dict.cc or leo.org to look up the words you need (or corresponding apps for offline use). You can also listen to how the words are pronounced. If you are looking for phrases in context linguee is also quite helpful.

So just pick some book you have already read - and enjoyed - in English and find the German translation. Perhaps look up some genre-specific words first (I did this with Harry Potter and had to look up all the magic-related words). Then just start reading. Since you'll already know the context quite well it should be easy to fill in the gaps. And you can still look up what you can't guess if you truly need to.

Not the answer you're looking for? Browse other questions tagged german-to-english learning book or ask your own question.

6
Comic books in German for beginners
7
Any German books with included vocabulary?
1
Basic German books of novel to learn the language for beginners (1000 words or A1/A2 level)
1
Suggestions of German grammar books
1
Student books like English “Round-up” but for teaching/learning German language
1
I am looking for level A1/A2 German books in PDF format
6
Why do translations of German books read so differently from other books?
3
Rigorous German grammar books written in English aimed at teaching the most basic up to advanced (preferably without exercises) suggestions