Any help is appreciated.

I'm not sure how you access these address books, but if you look at urn:nbn:de:kobv:109-1-3497746, you find answers to two of your questions on page 53 of the scan ("Zur Handhabung"). In short, (1) the roman numeral (I, II, etc) gives the floor number and (3) the E at the end stands for "Eigentümer" (owner). According to the explanation, this is used for the owner of a house, though, not the owner of a business.

If you compare (2) and (4), Kgst. and Mb. appear at exactly the same spot. And since the T stands for "Telefonnummer", I would presume that what follows is, well, the phone number. And if it's the phone number, I would guess that Kgst., Mb. etc stand for different "phone districts" within the city (Daniel Hoffmann suggests Königstwusterhausen and Moabit, which sounds plausible). This seems sensible given how phone calls were initiated in the 1920s (ie, you talked to the operator in charge of your own "phone district" and told him which "phone district" you want to be connected to, then you were transfered to the operator of the target district, gave him the phone number, and then he transfered you to the person you wanted to talk to).

Update: On p 57 of said scan, at the top it says "T = Telephon, Amt u. Nr.", which confirms the above suspicion: The T is followed by the "Amt" (the office in charge) and then the actual number.

Update II: Inspired by another answer, I think I've now found some sources for these abbreviations. In the Amtliches Fernsprechbuch für Berlin - unfortunately, the closest in time I could find is from 1934 - there is a "Verzeichnis der Fernsprechämter und Vermittlungsstellen des Ortsnetzes Berlin". See urn:nbn:de:kobv:109-1-15377045, page 12 of the scan (non-stable direct link): According to this list, Kgst. stands for the Vermittlungsstelle ("transfer office") Königstadt. This list does not contain Mb., though (but as I said it's from a decade later). In the Adressbuch der deutschen Gummi-, Asbest- und Celluloid-Industrie of 1920 I found a list of Fernsprechämter that contains both Kgst. (= Königstadt) and Mb. (= Moabit). See Google Books (snippet view only):

Kgst is abbreviated for Königsstadt, Königsviertel or Georgenvorstadt a district of Berlin, see German Wikipedia.

For a list of historical Berlin districts, see either explanation of district map in the same article, or Brockhaus 1894-1896. In the map of Berlin Wiensstraße (ie instead of i from your excerpt) is listed in the respective region in quadrants H2/H3.

As already communicated by others, e.g. the abbreviations I, II or III designate the floor, T. a telecommunications connection (Telefonanschluss) and E an owner.

The Berlin Address Book 1923 contains a list of telephone exchange offices on page 4556 and is supplemented here as a source reference. 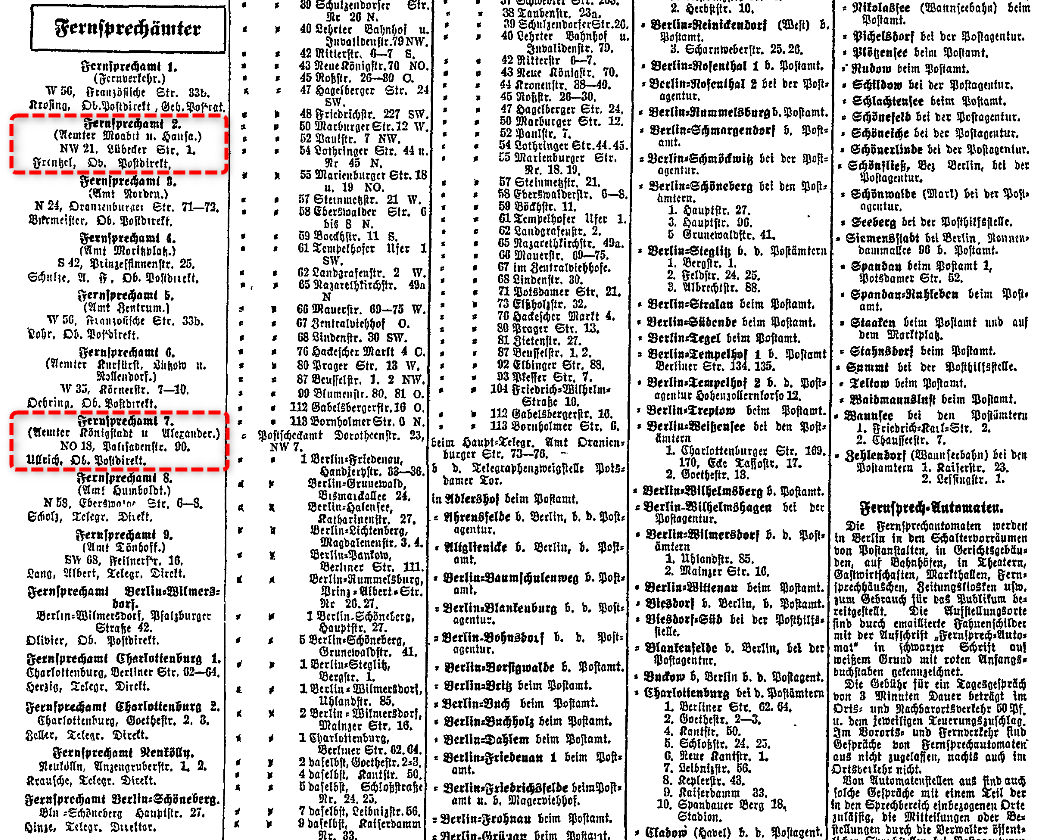 The telephone office 2 (Fernsprechamt 2) for Moabit and Hansa was located in Lübecker Straße 1. As you can see in Google Maps, Wiclefstraße 42 (from your question) is located in Berlin-Moabit nearby this historical office. Therefore Mb correctly stands for Moabit.

There also the offices Königstadt and Alexander are listed under the telephone office 7 (Fernsprechamt 7), which were accommodated together in the Palisadenstraße 90 starting from 15 August 1912. As you can see in Google Maps, Winsstraße 63 (from your question) is located in the northeast of the Berlin center nearby this office. Therefore and derived from the spatial and technical context Kgst correctly stands for Königstadt.

I dont know the answer, but I have a hint, you might follow. Kgst. might be Königstwusterhausen and Mb Moabit. Both are regions wihin Berlin. This can be evaluated by having a look on the map.

Not the answer you're looking for? Browse other questions tagged meaning abbreviation address or ask your own question.

14
How do I specify the floor number in the address for deliveries?