Why do Germans duschen instead of schauer?

I recently learned that in German, one uses the (I thought french) word “Dusche” to describe what in English would be called “taking a shower”. Meanwhile, the English word shower is apparently Germanic, comparable to Schauer.

die Dusche (noun); duschen (verb)
Before 19th century nobody used to shower. It came into German vocabulary as a medical term in 18th century, and became part of common language only in 19th century, when at first time people began to shower. Only rich people could afford the infrastructure and also public institutions. So for most people duschen or brausen (see below) was something that you could only do in a public bath. The word brausen was the term that was used by common people, duschen was used by aristocrats and other rich people who could afford to shower at home.

After WW II it became more and more common to have a shower at home, so in second half of 20th century both terms (brausen, duschen) was used side by side. Now (since the end of 20th century) duschen is the primary term and brausen is a less used synonym.

The French word douche has its origin in the Italian word doccia which means gutter or trench or channel. This word again is derived from Latin ductio which is a noun that means something like the tug, the lead. The corresponding verb is ducere (to tug, to pull, to lead)

die Brause (noun); brausen (verb)
These words have the same meaning as Dusche and duschen, but they have a different origin. Their origin is not very clear. Many experts think it is an onomatopoetic word that describes the sound of a waterfall, so it is similar to the English word swoosh. Also discussed is a relation to the noun Braus which today is only used in the phrase »in Saus und Braus« which means "in the lap of luxury". But I think the onomatopoetic root is correct (my personal opinion). Since the verb reflects to the sound, it also can be used when something makes a similar noise:

Dieter brauste in seinem Ferrari an uns vorbei.
Dieter rushed past us in his Ferrari.

btw: German brausen is neither etymologically related to English to browse, nor have these words a common meaning. (They are "false friends".)

As told in the section above, brausen was something that you did in a public bath. I lived for a long time in Vienna, and there are still some of those Brausebäder: 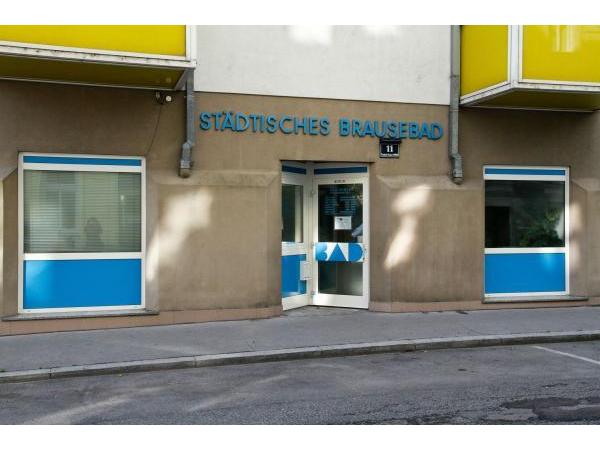 The heading over the door in this picture says »municipal shower bath«.

der Schauer (noun); schauern (verb)
A Schauer is a short stormy rain, but also a suddenly and intense sensation of fear and horror. It was in Middle High German »schur« and Old High German »scur«. It's meaning was all the time storm, hail, short and intense rain. Since there is no frightening thunderstorm in your bathroom when you take a shower, German speaking people never had the idea to give their Brause or Dusche such a negative connoted name.

3
Why in some places instead of "ja" they say "nu"?
7
Preposition for “Lauschen”
12
What is the reason why the translation of “Speed” is “Geschwindigkeit”?
3
Stochastic: Why are permutations (nPr) called variations in German?
8
Street, strait, Straße: Die Meerenge von Gibraltar?
8
Why do Germans spell and pronounce "rocket" with an "a" (Rakete)?
3
How did the word "Sinn" change in meaning from "interest" to "meaning/sense"?
3
What is "Grassicher"? or what could it have been a muddling of?
3
German word for "work-life balance"