Is Bavarian the 80th most spoken "language" in the world?

Yesterday I stumbled upon this infographic showing the 100 most spoken languages in the world.

For me Bavarian was always some kind of dialect spoken in Bavaria. Why is it seen as a language? Are the numbers correct?

Also see this Wikipedia article, where Bavarian is at the 72nd place: [List of languages by number of native speakers].(https://en.wikipedia.org/wiki/List_of_languages_by_number_of_native_speakers)

Thx to @DavidVoigt & @HubertSchölnast for pointing out that Bavarian includes a cluster of dialects spoken in Bavaria, Austria, and South Tyrol. 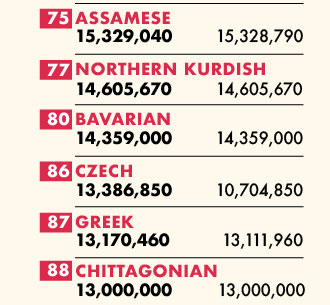 I don't want to discuss the difference between languages and dialects. German is a pluricentric language, which means, that there is not "a" single German. Through all the centuries from proto German up to now there never was only one German language or dialect. The situation is similar to the many branches of Arabic language, or Portuguese or also English.

Look at former Yugoslavia: In the 1990ies most of the people there spoke one language which was called Serbo-Croatian. Today, we count 4 languages that was classified as variations of Serbo-Croatian 25 years ago, although they didn't change very much in those few years: Serbian, Croatian, Bosnian and Montenegrin. The linguistic situation didn't change much, but the political situation did, and so within a few years one language became four distinct languages.

How different is Bavarian from Standard German?

In Bavarian also dative and accusative case are very often merged together to one case. This is the reason why many native Bavarian speaker still have difficulties to use the correct case when trying to speak standard German.

And, as you can see from the examples above, not only the grammar is different, but also the vocabulary. But still Bavarian and Standard German are very closely related.

Who is speaking Bavarian?

Bavaria is one of the 16 states of Germany. 13 million people are living in Bavaria. But many of the people living in this state are Frankonian who don't speak Bavarian.

Austria is a country that consists of 9 states. In 8 of them people are mainly speaking some bavarian dialect. Austria has 8.9 million citizens, and the one non-Bavarian state is Vorarlberg where 0.4 million people are living. Most of the people living in the 8 other states do speak bavarian dialects, but there are also many people living in Austria who speak other languages or dialects. (0.2 million People from Germany live in Austria, but also many people from Serbia, Turkey and many other countries.)

South Tyrol has 0.5 million people, but since it became part of Italy about 100 years ago, at the end of WW I, there are many people in South Tyrol speaking Italien now.

So, all together the number of 14.4 million people speaking Bavarian seems very plausible to me.

Boarisch (Bavarian) is also one of the languages in which Wikipedia is available. For example there is an article about Bavarian language/Dialects avaiable in:

Not the answer you're looking for? Browse other questions tagged bavarian or ask your own question.

2
Why is genitive case falling out of fashion in German language?

4
What is the Bavarian phrase/joke translated as "I'll give it to you if we have it"?
11
Are "Schmankerln" always Bavarian?
2
Simple past in spoken language
2
Origin of the Bavarian "In oana dua" ("all the time")
10
What does the “l” in “Christkindl” mean?
2
Funny train announcement in Bavarian dialect: What does it mean?
9
"Married since" in Bavarian
5
Bavarian German pronunciation
4
Why is the Ch in Chiemsee & Cham not [h] but [k]?