Stack Overflow for Teams is moving to its own domain! When the migration is complete, you will access your Teams at stackoverflowteams.com, and they will no longer appear in the left sidebar on stackoverflow.com.

Check your email for updates.

The etymology of the word "Stimmung"

According to Heidegger there is an existential bond between Dasein and Stimmung. I wonder if there exist an etymological link between the word Stimmung and the word Sein.

"Stimmung" derives from "Stimme", not from "Sein".

This should be difficult to decide, if the etymology of Stimm- is uncertain.

DWDS / Wolfgang Pfeifer at least isn't sure; Wiktionary instead agrees with Kroonen (fig. 1) linking several words for "mouth", which Pfeifer suggests merely as "möglich" (see the link to DWDS in @fdb's answer). Kroonen even links mouth itself, assuming a zero-grade *(st)m- would be an impossible cluster and therefore elided to *m-, thus also Latin mentum "chin".

Kroonen further aduces that a relation to PIE *steH- were "impossible in view of the Germanic evidence for e-vocalism" (viz stehen, stand).

One PIE root glossed "to cut" is mentioned in wiktionary and DWDS, but not by Kroonen. 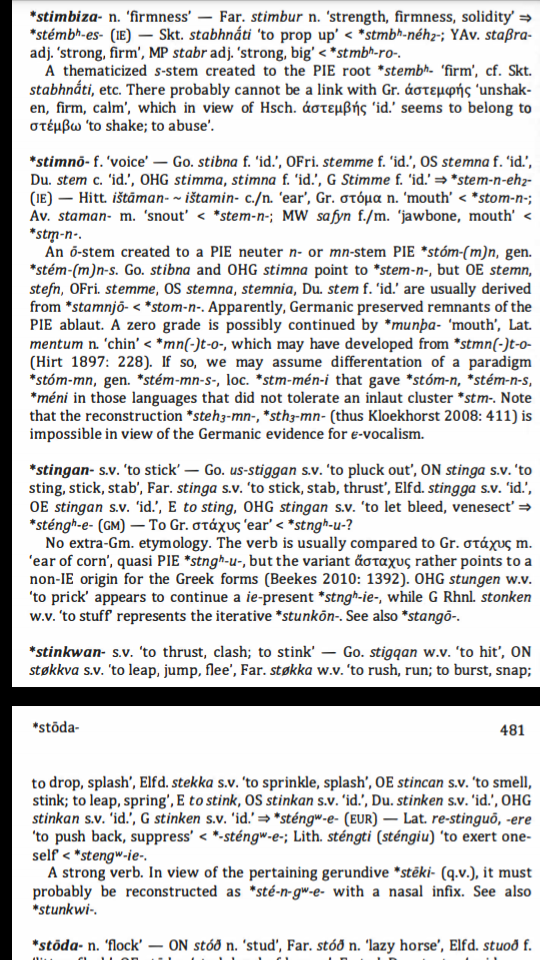 For sake of the argument, let's assume your hypothesis were correct, though.

There is a good comparison in system

From Middle French sisteme, systeme (modern French système (“system”)), or directly from its etymon Late Latin systēma (“harmony; musical scale; set of celestial objects; set of troops; system”), from Ancient Greek σύστημα (sústēma, “musical scale; organized body; whole made of several parts or members”), from σῠν- (sun-, prefix meaning ‘with, together’) + ἵστημι (hístēmi, “to stand”) (from Proto-Indo-European *steh₂- (“to stand (up)”)) + -μᾰ (-ma, suffix forming neuter nouns denoting the result of, a particular instance of, or the object of an action).

this would be *sem- + *steH-, but only through Greek. *steH- is one of the more significant roots. It should be really hard to say whether it had anything to do with sein, ist, PIE *Hesti-, *Hes-, and similar.

It's far from obvious how this should relate to "mouth" or "to cut", although it can be construed as a week verb to Stimme (vox), but the oldest sense being music related is notable.

Assuming conflation (or merger) of different etymons seems preferable in order to maintain your hypothesis while accepting Kroonen's. Whether it's possible, or even likely is another matter.

I want to add several tangents towards such a possibility, but this answer is already long enough and the shear amount of theory necessary to make it work is overwhelming for the time being.

Suffice to say that Heidegger was likely not making an argument from etymology, however a good argument towards it.

Addendum: If you are still interested, I can only recommend to investigate the roots next to "mouth" in Kroonen's dictionary very carefully. Just for example:

When searching mouth in Kroonen, several other terms appear beforehand that draw attention. In no particular order:

5
Etymological relatives of English "put" and "get" in standard and dialect German
3
Etymology of ending "-keit" in relation to ending "-heit"
2
Etymology and usage of "freuen" and "froh"?
12
Is there an etymological connection between the words “gut” (“good”) and “Gott” (“god”)?
10
Why did Heidegger say that, "German speaks being?"
16
What is the etymology of "Es gibt" in the sense of "There is"?
0
Grouping vocabulary by common etymology
9
Etymology of "Mohn"
4
Etymology of English 'fladry'
1
Etymology of “Fürst”