What is the most ‘understandable’ way to order sparkling water in German?

There are so many ways to express this and so many degrees and notions of what makes a sparkling water sparkling. When I first used the term "mit Gas" in German it was a humorous copy of how to express it during the vacation I had before (Spanish- "con gas"). Maybe the term "mit Gas" generally was imported into German, because "Gas" is usually not used for "Kohlensäure" (CO2) alone, but also for combustibles like propane, etc. (valid until correction ...)

The most understandable way in genuine German and my suggestion to express the order would be "Wasser mit Kohlensäure". Other expressions like e.g. "Sprudelwasser" are imaginable.

If only water is mentioned, you can specify, whether it should be sparkling or not, by saying something like:

Water that does not sparkle is also called

For me, the specification … mit / ohne Gas sounds weird. It may be a direct translation from the English with / without gas or the Spanish con / sin gas. I have only heard this from non-native fellow students and colleagues.

Nowadays, there are also water bottles with the imprint

For sparkling water there are various terms in German, and the common use in everyday life varies considerably in the various regions of the German speaking part of the world.

Therefore I offer here a community Wiki to collect the popular usage.

Think of how you would most shortly and clearly tell a waitress that you would like to have a glass of sparkling water, and don't forget to state your region.

If you want to make it absolutely unambiguously clear that you want the sparkling type, your options are:

I advise against using Wasser mit Gas. It will most likely be understood but in my humble opinion it is not the most idiomatic way of expressing sparkling water. Gaswasser does not work. In fact, reading it my brain first associated it with Gas/Wasser/Scheiße, a tongue-in-cheek generic name for any municipal utility supplier and waste remover (water and gas supply, sewage removal).

I'm from Germany and while I guess most people would understand "Wasser mit Gas", it definitely sounds very odd to a native German speaking person.

Actually, water with gas is the default in Germany. I myself usually just order "ein Wasser bitte". 99.99% of the time it will default to water with gas or you will be asked whether you want it with gas ("mit Kohlensäure").

If you want to make absolutely sure, just order "ein Wasser mit Kohlensäure". You can also say "ein Mineralwasser", which (similarly to "ein Wasser") will default to water with gas.

Because of these defaults, an order for water without gas must be different: Make sure to say e.g. "ein stilles Wasser" / "ein Wasser ohne Kohlensäure".

For utmost brevity, you might say "mit", and hope to be understood, at least if asked "mit oder ohne?"

Otherwise, the other answers apply. Kohlensäure would be my first guess. Sprudel is well acceptable. The bottle I'm looking at right now says classic, which is not even German, but shows a trend which I wouldn't have guessed existed, if it wasn't mentioned in a comment. Gas is outright wrong. Stilles doesn't help here, insofar the opposite nicht still, kein Stilles is suboptimal, whereas *Stilles is not being asked about (nor does it work with mit/ohne). Neither of these might have the right ring to it, as a matter of subjectivity, so I'm adding another one.

For the least troublesome experience, I would simply go with "Mineralwasser". You are -- rough guess -- about 50% likely to either be asked "mit oder ohne Kohlensäure?", or by default just given sparkling water.

There is an additional thing to watch out for, which is Tafelwasser. No, Tafelwasser is not tap water in a caraffe, as you would expect e.g. in France. If only it was! It is not particularly exquisite water either, as the word "Tafel" (which is a more courtly version of "table") would suggest.
Tafelwasser is the same as Mineralwasser (and costs similar) except for the tiny detail that Mineralwasser has a rather low minimun quality standard (indeed worse than tap water), and Tafelwasser has next to no quality standard at all. Tafelwasser is the worst, most inferior thing that you are legally allowed fill in bottles and sell -- way too expensive -- with the designation "for human consumption". While there may exist some Tafelwasser which is actually drinkable, I'd personally rather drink from the tap.

There's a lot of other words that one could use instead of Mineralwasser, but not all are easy to pronounce, understood everywhere, or rather colloquial, or trouble-free otherwise.
For example, Selters is normally understood just fine (if for no other reason because of "Sekt oder Selters") but technically it's a brand name like Tempo or Jaccuzi. While "Gib mir ein Tempo" will -- almost guaranteed -- never be a source of discussion with anyone, ordering Selters in a Restaurant may very well get you "Wir haben nur Appolinaris/Adelholzner/Wasauchimmer". So, rather than sitting there and wondering what the hell an Adelholzner (what kind of wood? I wanted water...) may be, you might as well just say Mineralwasser.
Or, say, Bizzelwasser? Well, it should be Bitzelwasser in the first place, again, Bizzel is a (deliberately misspelled) brandname. But ordering a Bizzelwasser kinda makes you sound like a 5 year old (or a 75 year old talking to a 5 year old). Sure, you will likely still get what you want, only just it may not deliver the exact impression that you want.
Sprudel? I'm guessing you will be OK with that in Bavaria (that is indeed the only word for Mineralwasser that my grandmother knows). Somewhere in the north? They'll probably still understand, but... not sure. 40 years ago, I got puzzled looks when I used the only word that I knew for that thing. Might have changed. Things do change. Sometimes.

Now, Wasser mit Gas is... just... weird. Don't say that, it's not German (not in a de-DE way, anyway). Not sure where this comes from, maybe Austria? They seem to have a lot of funny words like that. Schlagoberst? No soldiers will be beaten. Verlängerter? It's not as obscene a thing as you might think. Palatschinken? No ham involved, sorry. Doppler? Would you be surprised if that referred to a a bottle?

To add one observation: Mineralwasser will get you a sparkling water in almost all cases, but some waiters will not double check with you and might give you a flat water. I suppose that this is a regional quirk. I'm from the western region but the waiter/waitress might be socialized anywhere, so I can only guess why Mineralwasser sometimes didn't give me the desired drink.

As this happened to me a few times (an avid sparkling water orderer who used to eat out in restaurants almost daily), I started using Mineralwasser mit Sprudel to emphasize that I desire sparkling water. The term however is a little clunky and not the norm and may sound awkward.

As always with choice of words, it depends on the occasion and speaker. Saying Wasser mit Sprudel is fine and pretty informal. If I was eating out in a formal setting, I would use Wasser mit Kohlensäure. Both terms will ensure that the waiting staff does not have to ask you whether you want gas or not. If you use Mineralwasser, there is a relatively small but real chance that you end up with a flat water or that you have to go through the minor ordeal of clarification (At least in the west and the north). Since I want to avoid that, I do not use Mineralwasser without adding mit Sprudel anymore.

Do not say mit Gas. It is not used in Germany. It's a one-to-one translation from romance languages. It will most likely be understood, especially in restaurants but it is not the correct term and will at best sound weird.

If you want to be universally understood, I believe you have to go with «Mineralwasser mit Kohlensäure».

A nice overview of regional variation, including several ones not mentioned here so far, can be found at Die Getränke-Studie: Teil 2 – Kohlensäurehaltiges Mineralwasser on Kristian Baltruweit’s blog “Mapes Colorides”. He made a proper online survey in the style of the Atlas zur deutschen Alltagssprache and has evaluated 1523 answers. 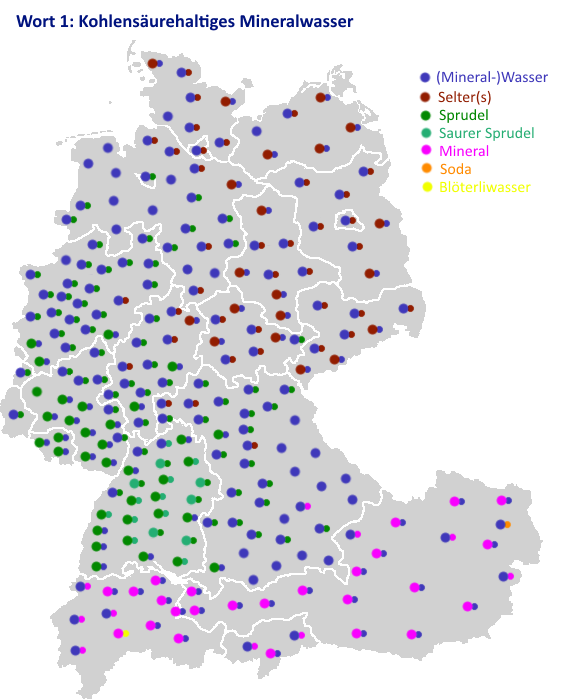 If you just want to be understood you might also say

and so on. Those words are more or less figurative, and any good German speaker should understand them. (Sorry to say that the service personnel in restaurants and bars quite often are not good German speakers.) Those expressions are not really colloquial in the sense of 'widely used', but one can come across them from time to time.

Once upon a time there was a long discussion about it on dict.leo.org. There you can learn details from different regional expressions for 'Mineralwasser mit'.

As different dialects abound in Germany (making communications difficult) as as they tend to often be quite different form one-another the first advice would be to stick to Hochdeutsch. There it becomes a matter then of saying "Ich möchte bitte Sprudelwasser". You might also just ask for water "Ich möchte bitte Wasser" and might then be asked "mit oder ohne Sprudel" (with or without bubbles) to which you would reply "mit" (with).

Since nobody mentioned it yet: If you only care about the carbonated part and not about the mineral part (i.e., if carbonated tap water is fine for you), you can just order Sodawasser.

If carbonated tap water is not available for some reason, the waiter will usually suggest carbonated mineral water instead, and you only have to agree.

You just order "ein Wasser". That's sparkling by default, though you may get the question "mit oder ohne Kohlensäure?" to which you reply "mit, bitte". The definite article is important: just asking for "Wasser" means potable water rather than an orderable item. While it would be rather unusual in Germany to get that (you'd never get it without the server making sure that you indeed mean "Leitungswasser"), the definite article makes clear that you order a regular beverage.

So I would use "Wasser mit Kohlensäure" for sparkling water in German.

At least in Germany this will be understood everywhere.

Not the answer you're looking for? Browse other questions tagged single-word-request colloquial or ask your own question.