What does "sich machen" mean?

Thus far I have seen the following translations of this phrase:

to do with yourself

One of several definitions listed for Tureng's entry for "sich machen," but this is the very first one listed. 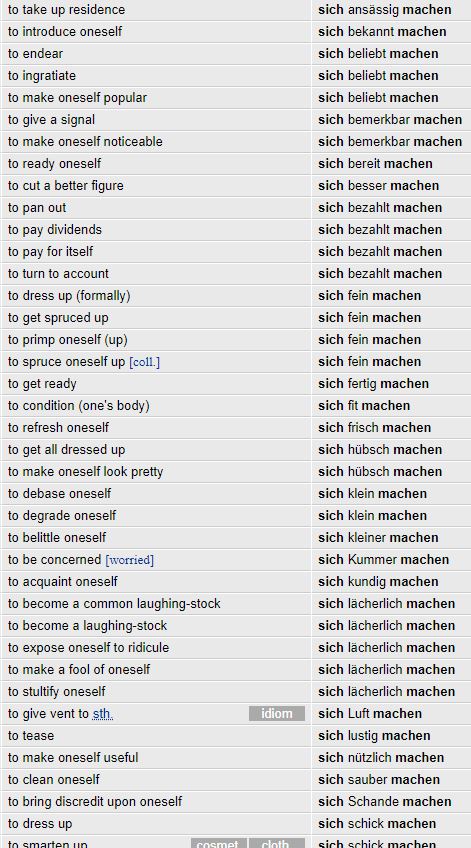 and I get what's happening there, but overall, the sources I've consulted with on this seem to be a bit all over the board on this. So, I still don't know what the phrase "sich machen" without any further contextual clues (as seen in the dict.cc list) means to most Germans. My guess is that in the most simplest of explanations it means "to do something with oneself."

In terms of my ability to use this phrase "sich machen," I think I could manage to cobble together sentences according to the translations dict.cc (and some others have provided), but outside of such specificity, my concern would be that something would get lost in translation and that I would do well to simply find another way to express such phrases as "to improve" or "to be arranged." What advice on this phrase would you give to students of German, especially those at the intermediate level or below?

As you've found out, it is very versatile when combined with adjectives or nouns.

A very idiomatic phrase that you didn't mention is

To make a fool of oneself (literally a monkey)

But what about a lonely "sich machen".

I only know this in the context of improving or showing advancement / proceeding. For example if you're doing a puzzle and you can already recognize some parts of the puzzle you could say "Das Puzzle macht sich (so langsam)".

Other than that, it doesn't really have a meaning without an additional adjective or noun. For that we can not give an answer as it is way too broad.

It's unidiomatic in English (for most cases) but try to go with "to make oneself something".

Yes, there will be a lot of idiomatic stuff you will have to learn. That is inevitable. Let's take a look at the unidiomatic part.

The basic use is as follows.

We have a subject that causes an object to reach a certain state. The state is expressed by a (resultative) predicative adjective, for instance sauber. This can of course be used reflexively.

This pattern should work for

The meaning can be a tad idiomatic with regards to the adjective: klein does not refer to size, but accomplishments (think English diminishing yourself); fein is well-dressed etc.

(English seems to prefer using specific verbs instead of a combination of general machen and an adjective, as the list of translations from dict.cc show.)

With regard to sich machen, seemingly without adjective.

Similar to some other verbs, leaving out the adjective results in a default meaning of good.

Note that the meaning is drifting into the idiomatic; it's not that he is good, but that he is doing well. The adjective no longer denotes the result of an action, as it does in the unidiomatic cases.

The list includes some constructions that are completely different in that they have a dative and accusative object instead of an accusative object and a predicative complement. (This is unfortunately obscured by the convention of using sich to indicate reflexivity – sich is both accusative and dative.*)

The pattern, on first glance, looks similar to

Er macht ihr Suppe.
He makes (cooks) soup for her.

*This might also be the reason for the horrible error under 22., where Wiktionary claims a dative is used. It's an accusative: Ich mache mich auf (den Weg), an die Arbeit.

"Er macht sich." - "He's making something of himself."

That is the only 'sich machen' with a definite meaning. Other uses of the words 'sich' and 'machen' together with another part muddy the waters, because that would be same as saying 'i made myself ...' (a sandwich? scarce? bigger? so many usages/meanings!

note: 'sich machen' works for the meaning given above, but can, different from the english 'to make something of oneself' also be applied to things that have no agency, with the same meaning of 'getting better'. "Das Wetter macht sich." - "The weather is improving"

Without context this is guessing, but if you mean "er macht sich" as a whole sentence, then is is a coloquial probably regional expression that means "he is prooving himself" or "he is showing a good developement"

Not the answer you're looking for? Browse other questions tagged meaning translation verb german-to-english reflexive or ask your own question.