is a common form of congratulation for weddings, and gift cards with this wording can be found in endless numbers. 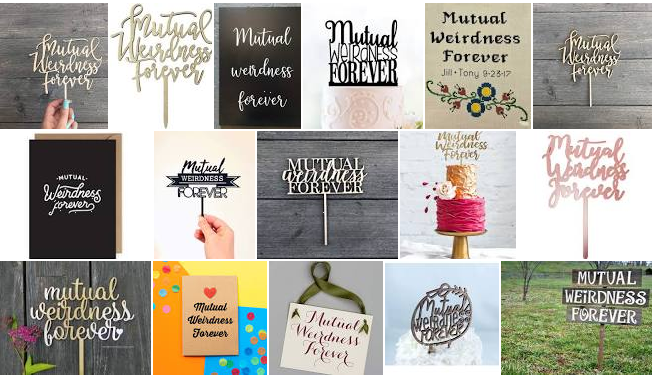 How would you say this in German? I need this for a gift for a couple who describes their relationship this way.

As a literal translation (“gegenseitige Seltsamkeit für immer”) obviously would not work – is there an established cultural equivalent in German?

As the meaning - or rather the pragmatics - of Mutual weirdness forever seems to be: being used as a jokular form of congratulation for weddings (or other love-related occasions), but a litteral translation to German is not possible with usable results, one could try to search for expressions in German that would transport the idea of good wishes for the longevity of the relationship in an ironic way, in completely different words.

This is a proverb, usually used to express the opinion that at some time in life two persons will find their significant other. Used for a wedding, it sounds a bit tongue-in-cheek, as obviously the couple is being compared to kitchen equipment and thus not taken very seriously.

This proverb is usually used to express the idea that different people do have different tastes and preferences. Applied on a wedding situation, it would be a friendlyly disrespectful way of acknowledging the relationship. (When hearing Tierchen I am thinking of a small mammal, for example a squirrel, so I imagine a couple of squirrels in love.)

I must emphasize however that the ironical use of these two proverbs at weddings is not at all established or common in the German speaking part of the world. I have never seen anybody use them on a wedding gift card or whatever. I just searched for possible ways to create something more or less equivalent to "Mutual weirdness forever".

Why not taking the English original? People in Germany are pretty much used to English catch phrases, your friends definitely understand English, and the card is a gift from you personally, so it is a genuine reference. - Unless you want to be extra-funny (or weird) and provide a German equivalent that everbody makes either frown or start because it is so unusual. In this case, of course, you may resort to the literal translation SwissCodeMen provided in his first comment:

as this is a formula that is actually used in wedding ceremonies of the Christian denominations, but using this on a gift card or so would rather sound like a dark, even malevolent way of thinking and can definitely not be recommended. It is bitter irony, but you were looking for joyful irony.

Without any intended meaning in English supplied (I also note, that none of your cards tries to depict something exceeding the phrase; so as assumed in some comments it might be a meme without much substance) a German translation seems to be

but this is so far from established, that I don't rember to have read it even once.

Not the answer you're looking for? Browse other questions tagged english-to-german phrase-request or ask your own question.