Why do translations of German books read so differently from other books?

I'm unsure whether my question is on-topic here, but it's about the German language, so I've decided to try.

I am an undergraduate student from Japan who learns foreign languages and loves reading books, especially historical ones. German is my third foreign language, so my German isn't yet good enough to effortlessly read German books, but I've read translations of some books by Remarque, Manstein, Hitler, and Bismarck. My impression is that German books, at least in translation, read quite differently from other books. It isn't a big stretch to say that I feel as if German books were written by aliens who think and express their thoughts differently from ordinary people. And my impression doesn't change when I read German books in English translation rather than Japanese translation. I've read many English books in the original language, including such historical books as The Second World War by Churchill, July 1914: Countdown to War by McMeekin, and Narrative of events during the invasion of Russia by Napoleon Bonaparte and the retreat of the French Army 1812 by Wilson, so I'm pretty confident to say that English translations of German books read pretty different from English books, which I find to be quite naturally written.

I'm curious as to why translations of German books feel so different from other books. Is it at least partially due to the German language itself, or is it something purely culture-related that makes such a difference?

To illustrate what I am talking about, here's a random sentence from an English translation of Bismarck's Gedanken und Erinnerungen:

I put a few questions to Moltke as to the extent of his confidence in the state of our preparations, especially as to the time they would still require in order to meet this sudden risk of war.

That's a very typical sentence from the book - a sentence that feels too artificial, bulky, and needlessly long. "Extent of his confidence in the state of our preparations," oh my God! I'd write much simpler: I asked Moltke how prepared our army was for war. That's the real meaning in the context, as you can check by looking in the book. Everything I omitted in my own translation is either insignificant or obvious from the context anyway. If I were to emphasize the interest to know the time period needed to prepare for war, I'd still write something simple: I asked Moltke how prepared our army was, and, in particular, how long it would take to get ready for war. And even if I were to convey all unnecessary nuances, I'd still find a way to write something natural, like this: I asked Moltke a few questions about how prepared our army was and how sure he was about that, focusing on the time needed to get ready for such a risk of war.

I looked in the original German text, and here it is: 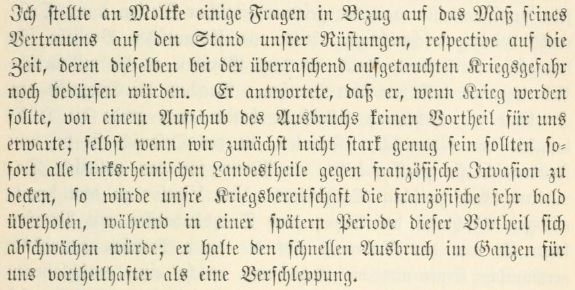 So as far I can judge, it isn't a fault of the translator. He accurately translated what Bismarck had written.

Sure, the sentence in its accurate English translation doesn't look weird to an extreme, but the thing is that when a whole book is written like that, it's a pretty special read, so I wonder what makes German authors routinely express themselves in such a way. Is it just how the German language works, or is it rather a cultural tradition to write like that?

There are many other aspects that make German books feel different. For instance, the sense of obligation is very often referred or appealed to in German books, explicitly or implicitly, or at least that's my impression from translations. More broadly, the way of thinking underlying writings of German authors seems to be tied to some set of unwritten principles or rules according to which decisions in life should be taken or how things should be. A contrast is often made between how things should be and how they actually are, and this results in a flavor of overall gloom.

I hope that German speakers can offer their perspective as to why translations of German books read differently from other books. Is it due to the German language itself shaping the way of expressing thoughts? Or do accurate English translations of German texts actually misrepresent them in terms of style and emotional connotations? Or is the effect due to cultural factors?

The answer to your question is actually simple:

The books you are currently reading are books from late 19th (or early 20th) century; moreover they seem to tend to be written by statesmen (politicians / bureaucrats; Remarque is an exception). Texts from that period and from that kind of people tend to use a very manneristic (complicated, convoluted, and noun-loaden) style. This is by no means good style, even not at the time, and definitely not today. Also, it is difficult to translate into other languages as a "style-true" translation would require doing things in other languages that are not common in those languages.

Or if you insist on using books from mid-late 19th century: compare a novel by Karl May (e.g. Das Buschgespenst) to a novel by Wilkie Collins (e.g. The Moonstone). Both are good authors (and both books are precursors of modern crime story literature). With them you will find that differences are much smaller.

Or if you want to compare a very good modern German novel with its very good English translation, take Wolf Haas' Komm süßer Tod. There is a version of the book available that has both the German original and a congenial English translation, issued by "Swiss Re" insurance company in about 2003 or so, as a Christmas present for customers and partners. I suppose copies are available in the second hand book market. 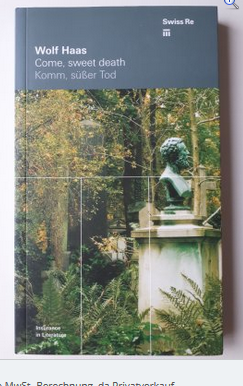 While I am native in German, I still had problems to understand the English translation. The German sentence is definitive complicated, but not as brain damaging as the English one. It took me quite some time to figure out why.

First, the translation is very literal. Too literal for my taste. "Ich stelle Fragen." should be rather translated with "I ask (questions)." than "I put questions."

And then there is the grammar problem. Some word orders are fine in German but are uncommon or feel clumsy in English, even if they are technical correct. On top of that, German allows many word orders, which are definite false in English. The German grammar is more complex than the English, yet it is also more flexible. Let me give you an example.
A word by word translation of Bismarcks sentence would be something like this: "I put to Moltke a few questions, concerning the extent of his confidence in the state of our armaments, with regard to the time, that they by the surprisingly arisen threat of war still would require." That is horrible English. If I do the same thing with an English sentence, the result is usually a proper German sentence. I admit, not a beautiful German sentence, but an understandable one. This means that an English sentence can often be translated into German with the same sentence structure, while the opposite is less likely. The translator of your book tries to keep the same grammatical constructs as in German, probably to stay as true to the historical text as possible. To illustrate how much translations can differ from each other, I have juxtaposed the quote from Bismarck with two other translations below.

The Translation in your book: "I put a few questions to Moltke as to the extent of his confidence in the state of our preparations, especially as to the time they would still require in order to meet this sudden risk of war."

Deepl (automatic translated): "I asked Molke a few questions concerning the degree of his confidence in the state of our armaments and the time they would need to be ready for the danger of war that had unexpectedly arisen."

My Translation: "I asked Moltke a few questions about how confident he is in the state of our armaments, with regard to the remaining time our preparations would need, if the threat of war would surprisingly arise."

All translated accurately what Bismarck had written. The difference is if they tried to stay as close as possible to the original or translated more freely.

The old-fashioned language is another problem. A modernized Version could be something like: "I asked Molke, about his opinion on the state of our army and how long they would need for preparations, should the war break out surprisingly." Retranslated to German it would be: "Ich fragte Molke, nach seiner Meinung zum Zustand unserer Armee und wie lang diese noch für Vorbereitungen brauchen würden, sollte der Krieg überraschend ausbrechen." But that of cause is a higher level of interpretation, which could cause other problems, especially with historical texts.

On top of that, Bismarck prefers long and complex sentences. This might be a cultural thing. But that is only my personal opinion, since I have neither examples nor evidence for it.

In conclusion the very literal translation, the use of complex grammar, the old-fashioned language and long sentences, make it so hard to understand. None of that is specifically typical for German. "The Will to Believe," by William James, includes all of these (with exception to the literal translation). And I am sure everybody can find a text in their native language with the same flaws.

Not the answer you're looking for? Browse other questions tagged translation german-to-english history style culture or ask your own question.

5
Is "zweisprachige Ausgaben" the right expression?
5
Reminding of own identity at the beginning of correspondence
1
"Sir" (used in translations from English into German)
11
Need help to read Fraktur from a 18th century book
1
Who is regarded as one of the world's leading experts on the German language?