Looking for a compound word that describes a sunbeam

The English term sunbeam describes the light-scattering effect visible when sunlight shines through openings like clouds or tree branches past a darker area. I'm hoping there is a stereotypically long German compound word that describes it: 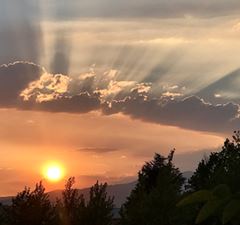 Sonnenstrahl is nice but I'm looking for a snide way to contrast the japanese term komorebi with a German compound word. Komorebi roughly translates as “the scattered light that filters through when sunlight shines through trees”. I'm hoping for a word that exaggerates the German ability to compound words, is not necessarily poetic, and is minimally already a part of German diction.

There is no word like the one that you are looking for. But you can always make one. Usually, compound words are short and describe a common compound concept. In this case, "Sonnenstrahl" (sunray) or "Strahlenfächer" (fan of rays) would be the longest I would go for and add more detail as a sentence (e.g. "Das Auffächern der Sonnenstrahlen über den Wolken" or "Die Wolken brechen das Sonnenlicht zu einem Strahlenfächer"). If you want to put these concepts in a single word, go for it.

Here are some occasionalisms (newly created (compound) words that are not considered standard German) that come to mind:

You can construct compound words as complex as you want but the longer it gets, the weirder it will sound especially to native speakers.

The effect in your picture you are talking about is called

which sounds poetic and may be the most beautiful of these three words (from my point of view).

But as you said in your comment you are looking for a word similar to "Komorebi", unfortunatly there is no official one (yet).

Not the answer you're looking for? Browse other questions tagged single-word-request or ask your own question.

4
Word for a dog searching?
4
Searching for a word that best fits in the context “Der Schüler —— eine Lernvereinbarung.”
5
Word for (allegedly) catholic terrorists
1
Term from economics that describes an oligopoly in the context of investment intensive infrastructure
4
Does a word in German exist that describes someone who works on something with passion?
19
Is there a German word for a food that a person likes but is bad for their body?
1
What is the German word of this small boat that you usually rent for two people?
4
German word for feeling suffering from the fact, that poor tools negatively impact quality of your work?
6
Looking for the opposite of Schadenfreude
5
Compound Word Neologism