There is a famous-ish quote from Ludwig Boltzmann, which, in English translation, reads (emphasis added):

The general struggle for existence of animate beings is therefore not a struggle for raw materials - these, for organisms, are air, water and soil, all abundantly available - nor for energy which exists in plenty in any body in the form of heat (albeit unfortunately not transformable), but a struggle for entropy, which becomes available through the transition of energy from the hot sun to the cold earth.

This is a beautiful quote, partly because Boltzmann, writing in 1886, foresaw concepts that wouldn't be fully developed until well into the 20th century.

However, the quote (in this English version) isn't quite correct, because it's not entropy that becomes available, but negative entropy, the same quantity but with a different sign. Boltzmann gives a definition of entropy earlier in the essay, so I know he's using the same sign convention we use today. It's always seemed odd to me that, being one of the first people to understand these ideas, he would make such an elementary mistake.

So my question is whether the original German text (below) can be read as meaning something different from the "struggle for entropy" of the English translation.

Of course, it's possible that Boltzmann made a mistake or (more likely) decided to simplify things for a popular audience - I'd just be interested to know if this is really what he said.

The English translation is from Theoretical Physics and Philosophical Problems (1974), p. 24, and the German original is from Populäre Schriften (1979), p. 41. (Here's a direct link to chapter, which seems to have a pdf link.)

(P.S. if this is more appropriate on History of Science and Mathematics please let me know. I thought it might be better here, since it's really about the German language.)

As first question there is:

I will use this link as "an original text" (PDF, wiley.com, print of 1976, p. 338, publisher note states that he reconstructed quasi invented this text which was a speech from 1905)

So Boltzmann is describing the fact that the creation of plants are "fighting for the right to create entropy". What he describes as "by catching more of the sunlight than neighboured plants and use the sunlight for chemical synthesis".

A well known term coined by Charles Darwin is "survival of the fittest", around the same time Boltzmann was doing his work. So the idea that "negative entropy" comes in and that the plants have to fight for it, sounds quite reasonable. Boltzmann simply goes the next physical step "what are plants fighting about". On high level, they compete for water, nutritions, light, heat. On a lower level they compete for the "right" to "produce" entropy. And a competition is often enough described as a fight.

Would you say this is a natural way to interpret the German text?

So yes, historically I think the "Kampf um die Entropie" is correct in the context of life. Leo.org lists with struggle many translations that fit very well to something that decides about life or death. It is neither a battle nor a combat nor a campaign.

So no, nowadays the term "Kampf um die Entropie" would mainly be used in terms of populism. Because today a physicist would know the rules and a biologist would know that there is nothing close to "Kampf". As battle or combat or campaign require the awareness of opponents and context.

While the survival of a plant is on a very low level determined by entropy - it sounds less useful to describe it even as a competition. The more basic/fundemental mechanisms are needed to explain a behaviour, the less complex situation is given. So I'm stuck on the observation level with light & water etc. to use words like competition or struggle. I can observe that plants grow where this fits best - and that it might fail due to ... . I cannot observe if and how plants grow because of entropy. The result just stays the same - the race about survival is among other things a race about light which is basically a race for entropy.

I beg to disagree with some of the other answers. To me, Boltzmann's German text is OK - though some alternative wording may have been more clear. The difference is that the German version is not directed, while the English version has a direction, and the wrong one.

In contrast, the English translation is clearly wrong.

IMHO the German "Kampf um Entropie" could be somewhat more literally translated to English "battle about entropy", "battle for entropy" corresponds more directly to German "Kampf für Entropie" - which would be wrong.

"Kampf gegen [against] Entropie" would have been a more precise choice of words, yes.

The German Kampf um x is not (as) directed as Kampf für/battle for or Kampf gegen/battle against are, it may have connotation of two sides with opposing direction (one of which would then be the 2nd law of thermodynamics). But is is also regularly used in everyday language to express one side, and whether that side is for or against x must be concluded from context.
Examples where I have the against side as first association would be: "Der Kampf um die Mülldeponie/den Klimawandel/die Anliegergebühren".

All in all, this looks to me like just one more example where the translation of deceptively easy technical language went subtly wrong.

Boltzmann uses the (very rare) word "disponibel", which according to LEO can be translated as "available". However, I think the secondary translation "disposable" might be more fitting and closer to the intended meaning. He is talking about (the potential for) change of entropy (as far as I understand) and the sign would then indicate a transfer of entropy (towards the sun).

If he really meant "available" in its ordinary meaning, he would have used the common word "verfügbar". He deliberately chose a rare technical term that derives from French "disponible". According to Merriam-Webster the word also exists in English and means "capable of being placed, arranged, or disposed of as one wishes".

Note that Boltzmann also uses the definite article. German has slightly different rules regarding use of articles than English but here he most likely means to refer to a specific entropy as specified by the subordinate clause.

... but a struggle for the [that?] entropy, which becomes disponible through the transition of energy from the hot sun to the cold earth.

My question is whether the original German text can be read as meaning something different from the "struggle for entropy" of the English translation.

No. Boltzmann says "Kampf um Entropie" which is correctly translated by "struggle for entropy". The German text has exactly the same problem as the English translation: It is confusing if we read it as it is. Of course we can understand what he "really" means, but this requires knowledge about various concepts of physics and especially thermodynamics - so it is not self-explanatory, but needs interpretation.

Shegit Brahm's answer contains this link where one can find the text. It ends with 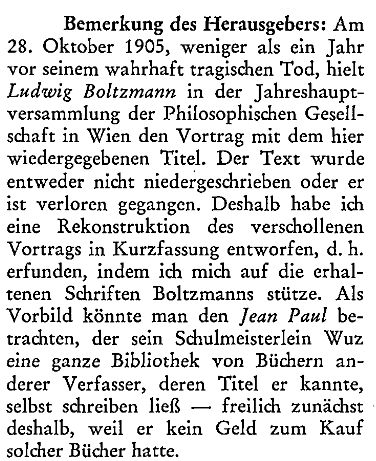 As observed by Shegit Brahm, this makes clear that the text was invented by the editor, so we do not know whether Boltzmann really said anything like "Kampf um Entropie".

In mtwede's comment we find one more interesting Link which quotes the text in the modified form "Kampf um die (Neg-) Entropie" - certainly because the original phrase is confusing also in German.

Since the whole text is a fake, in my opinion it would be better to rephrase it as

... struggle for energy, which flows from the hot sun to the cold earth and becomes available to organisms.

Not the answer you're looking for? Browse other questions tagged meaning-in-context or ask your own question.

6
Is "Machtachse" a word?
1
Can "Ganz Andere" really be translated to "wholly other"?
2
"Wohlgetan" in this context
6
Understanding “dem Kind, das für den Vater fleht”
4
Is "Eigentlich nicht" the proper way to translate "Not really" (in a specific context)?
5
Why does "Der Ball ist rund" mean "Alles ist möglich"?
2
What's an indifferent way to answer "Wie geht's?"
2
Meaning of _gläubig_ in this context
11
What does the verb 'wegpurzeln' mean? [context inside]
1
In what context does the apparent meaning of "ausreichend" make sense