What greetings were common before "grüß Gott" became universal?

Today, the overwhelming majority of German speakers in Southern Germany and Austria greet each other using grüß Gott. The English Wikipedia article on grüß Gott claims, without a supporting reference, that "the greeting was promoted in the 19th century by the Catholic clergy". This implies that at some time in the 19th century, the use of grüß Gott was not as widespread as it is now. Two questions therefore arise:

As I had commented, the way to answer this question is by collecting all theater pieces, records of talks and letters and find therein all forms of greetings and then tabulate them.

It's not that easy to do quickly.

But I have tried then and now again, and I have at least one example now which I think clearly refutes the 19th century theory you have in your Wikipedia lore. This is in a theater piece in Sebastian Sailer "Schriften im schwäbischen Dialekte." dated 1819, so it looks back into at least the end of the 18th century. And we have here the only greeting being "Grüß Gott": 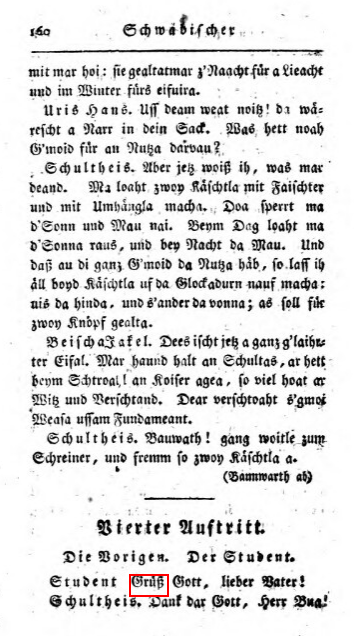 and it is found online here

As I look around for more, I will bring it here.

... so not having a text of Wilhelm Tell that I could search, I figured I do a search in Project Gutenberg library as a whole.

which brings a lot, knowing the authors would certainly help. But then, if I put "Friedrich Schiller" into the search, I get "Gott grüß' dich, Gaudieb!" in "Der Neffe als Onkel".

In the wide search I also get Arnim & Brentano, des Knaben Wunderhorn, "Gott grüß' euch Alter, schmeckt das Pfeifchen? Weißt her!" which reminds me that the Romantic movement to collect folkish material, including the Grimm Brothers, will be something to check for.

This is also source material to prove the origin of the short form "Grüß Gott", wich is "Es grüße euch Gott!" (in the old texts you will find the polite plural "euch" as in English "you" ("yee"?) instead of "dich" ("thee"). But that wasn't so much the question. Only it is clear that the 18th century you have this form and the short "Grüß Gott" already, and in theater pieces there is always a tendency to put a higher form of the vernacular, and not the common more vulgar form.

Not the answer you're looking for? Browse other questions tagged history salutation austrian bavarian or ask your own question.

58
Polite alternatives to "Grüß Gott"?
19
Is 'Grüß Gott' greeting in Bavaria religious-neutral?
16
How do non-Baviarians respond to "Grüß Gott!"?
3
What were the main German words for a prostitute before 1800?
0
What are the various Swiss dialects for Guten Abend and other day greetings?