How does one say "illustrated dictionary" in German?

I'm looking for the German-language equivalent of the Petit Larousse Illustré, and, embarrassingly enough, I can't figure out what keywords to search for it with. Or rather, everything I've tried—illustriertes/bebildertes Wörterbuch/Lexikon, etc—has failed miserably.

(Of course, my failure with this search may stem from the fact that such dictionaries are simply not as common in German as they are in other languages, but I find this impossible to believe.)

BTW, an "illustrated dictionary" (like the Petit Larousse) is an entirely different type of dictionary from a Bildwörterbuch ("picture dictionary")! I have no problem at all finding the latter. In fact, "Bildwörterbücher" is basically all my searches turn up!

Also, from what I've seen, pretty much every German dictionary aimed at school-age children could be described as "illustrated", even though they are never listed as such. The Petit Larousse, however, is not a work designed specifically for children (although I'm sure that children from age, say, 9 or 10 onwards, would have little trouble using it).

EDIT: It seems that, as difficult as it may be to believe, this sort of dictionary is just not produced in the German language anymore, with the possible exception of the Wahrig that splattne mentioned in his answer. (I write "possible exception" because I have not confirmed yet that is indeed still in print). I don't know what to make of this phenomenon.

One of the terms you can search for is 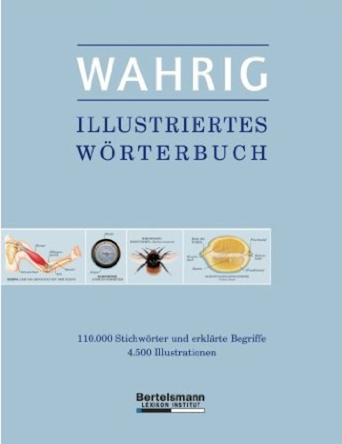 Starting from a mere 20 euros, you can buy used the 24-volume dtv encyclopedia (2006 edition). 150,000 entries (headwords), 10,000 illustrations, photos, tables, charts, tables... Some of the customer reviews claim that the (older) 20-volume dtv encyclopedia was better; this, too, is available used on amazon and probably from other vendors, too. Also check out the "Customers who viewed this article also viewed these other articles" section.

As dtv note on their website, the market for general reference works (encyclopedias but also dictionaries) has dried up in the Internet era and they are now publishing only narrow-interest publications (acupuncture, art, etc.)

There are probably none of these Books for the German language (except the out of print Wahrig). If you can't get one, you might find wikipedia useful. It's partially illustrated and can be used as a unilingual or multilingual dictionary via the language links.

Not the answer you're looking for? Browse other questions tagged translation reference or ask your own question.

6
German flash cards with pictures and no English?

4
Word choice: "manuell" or "von Hand"?
14
Reference work on prefixes, suffixes, etc
7
What is the children's song "Zehn kleine Zappelfinger" about?
6
How do I know which declension pattern a noun belongs to in the Langenscheidt pocket dictionary?
3
German word for "suspension" / "suspended harmony" (music theory)
10
What is an appropriate translation for "in flight"?
2
How does one say "carefree" in German?
4
Does the word "pouserieren" exist in German language?