[My free translation: "It is right, that "it" sounds disrespectful. But in some dialects is "it" used for women (It Gerda has headache).]

To be honest, I can not believe this, and so I want to ask:

In which dialect is "es" a common pronoun for a woman?

I am from a region where it is normal to refer to a woman with the pronoun "es" (Region of Kaiserslautern). After joining university I was asked that question by some people not familiar with the dialect, since they also found it disrespectful.

The explenation I usually give, which is also to some extent in the source given by Björn Friedrich:

It comes from a time when unmarried women were still referred to as "Fräulein" instead of "Frau", so the correct pronoun would be "das Fräulein Meier". Today this is not used anymore, but it is still common to use "es" (dialect for "das") when referring to good friends, in general people you would call by the first name and use "du" when talking to them, and to use "die" when talking about people you would only call by the last name.

When talking in the dialect it is not at all seen as disrespectful when using "es", everybody is doing it, but I would never use it in standard German.

Below is a map from the Atlas der deutschen Alltagssprache1 that shows how article forms for females are distributed. As you can see, neutral article forms (yellow and pink dots) are common in western regions of Germany, in particular in the Rhein–Main–Saar area. 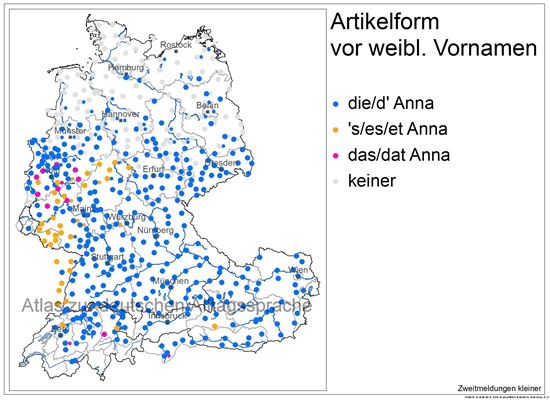 The neutral forms are also the subject of research. For example, I found an article by Nübling, Busley, and Drenda2 (in German) that investigates this phenomenon, although I cannot assess how representative this work is.

This seems to be the case for many western middle German dialekts, mostly along the Rhein, and in some places in Swizerland (thus being Allemanic dialects). This article will contain more ("Dat Anna und S Eva – Neutrale Frauenrufnamen in deutschen Dialekten und im Luxemburgischen zwischen pragmatischer und semantischer Genuszuweisung"):

In dialects in western Germany and Switzerland and Luxembourgish, given names for females are of neuter gender, e.g., dat Anna, s Eva, while those for males are masculine, even when usually neuter diminutives are formed (e.g., alem. de Hanseli 'ART.M Hans.DIM'). This onymic neuter is the unmarked norm in many dialects; if a feminine form also exists then it expresses social and emotional distance from the named woman.

As for pragmatics and politeness: as long as this is true dialectal usage (and not pejorative abuse of standard language), it seems not to be negatively connotated at all, but ranging from neutral to even intimate. It is very strongly marked as dialect, though, if used within non-dialectal contexts, and may thus be confusing for listeners not familiar with it.

Some forms of the possessive dative pretty much depend on neutral gender because they would otherwise result in strange juxtapositions of high German and dialect idioms: "War dem Susi sein Vadder ooch da?" ("was Susan's father present as well?") would not really work as "War der Susi ihr Vadder ooch da?".

A typical dialect using the neutral gender for females is Saarländer Platt. In fact, there has been considerable criticism of the "Heinz Becker" locally-colored sitcom since for the sake of an all-German audience, the dialect is considerably rectified, notably lending females a female grammatical gender.

Not the answer you're looking for? Browse other questions tagged pronouns dialects or ask your own question.

8
How would one refer to a non-binary person in German?

11
Is “Säegermacher” the Yiddish word for “watchmaker”?
12
Which grammatical gender would I use for a masculine noun with reference to a woman?
3
“Dies” or “das” for introducing person
6
Pronoun gender for proper nouns
2
Southern Austrian Dialect word for “Patenonkel”
1
Darüber/darauf etc for plurals?
0
using 'es' for subjective masculine pronoun
1
What's “Standarddeutsch” for “samma”?
3
Role of relative clause for a person